Bosutinib for First-Line Use in Chronic Myeloid Leukemia: Is Three a Crowd?

BOSUTINIB ( BOSULIF) is the latest tyrosine kinase inhibitor that has shown a superior molecular response profile when compared with imatinib.1,2 An orally available dual SRC/ABL1 inhibitor, the drug was shown in preclinical studies to have a potent inhibitory activity against BCR-ABL1 and minimal activity against KIT and platelet-derived growth factor receptor, which has the potential advantage of a more limited nonhematologic toxicity profile.3,4 The tyrosine kinase SRC is a member of the SRC family kinases, which function as key regulators of signal transduction; overexpression of SRC kinases has been found in several malignancies, such as carcinomas of the lung, colon, pancreas, and breast.5,6

Bosutinib at a dose of 500 mg daily is currently licensed for use in chronic myeloid leukemia (CML) as second-line or later therapy for patients who have either progressed on or are intolerant of the first-line therapies imatinib, dasatinib (Sprycel), or nilotinib (Tasigna). Because of the promising results in phase II trials, the manufacturer conducted a randomized trial comparing bosutinib and imatinib in untreated patients with CML (BELA trial).1

THERE WAS NO significant difference in the incidence of complete cytogenetic response between bosutinib and imatinib, 70% vs 68%, which was the primary aim of the trial. However, there was a higher proportion of patients who achieved a major molecular response at 12 months on the bosutinib arm compared with the imatinib arm, 41% vs 27%, a shorter time to response, and a lower rate of transformation to accelerated or blast-phase disease.

BECAUSE OF THE 41% incidence of major molecular response in the bosutinib arm, the manufacturer sponsored a second trial, called the BFORE, with the same design, only this time major molecular response was the primary endpoint; the BFORE trial is reviewed in this issue of The ASCO Post. This study used a lower dose of bosutinib, 400 mg daily, but again showed superior results with bosutinib compared with imatinib with respect to major molecular response at 12 months, 47% vs 36%, thereby meeting its primary endpoint.2 In addition, the complete cytogenetic response at 12 months was superior on the bosutinib arm compared with the imatinib arm, 77% vs 66%. The results of the two trials are shown in Table 1. 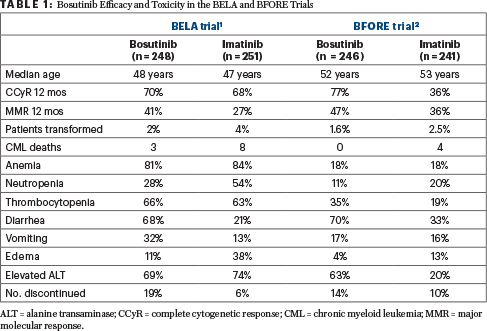 TABLE 1 : Bosutinib Efficacy and Toxicity in the BELA and BFORE Trials

The rates of major molecular response at 12 months in both the BELA1 and BFORE2 trials (41% and 47%) compare favorably with those seen with nilotinib (44% for the 300-mg dose)10 and dasatinib (46%)11 when imatinib was the comparator drug (22% and 28%, respectively). Importantly, bosutinib was similar to nilotinib and dasatinib in terms of faster achievement of complete cytogenetic response and major molecular response compared with imatinib.

“Bosutinib is a worthy new addition to the list of tyrosine kinase inhibitors effective in the first-line treatment of CML, with a rate of major molecular response at 12 months matching that of dasatinib and nilotinib.”
— Ellin Berman, MD

The toxicity profile of bosutinib was different from that of imatinib, with gastrointestinal side effects, particularly diarrhea, being more frequent. However, diarrhea was typically of low severity and resolved in most patients with the use of loperamide or diphenoxylate/atropine. Elevated levels of AST and ALT were seen more frequently in the bosutinib arm; in the BFORE trial, the most common cause of bosutinib discontinuation was elevated liver enzymes.2

In both the BELA1 and BFORE2 trials, the incidence of cardiac side effects was similar: 4% with bosutinib vs 3% with imatinib in the BELA trial and 5% vs 5% in the BFORE study. In both trials, QTc prolongation was the most common side effect.

BOSUTINIB IS a worthy new addition to the list of tyrosine kinase inhibitors effective in the first-line treatment of CML, with a rate of major molecular response at 12 months matching that of dasatinib and nilotinib. For many investigators, it was frustrating not to have the drug approved for this indication after the BELA trial, as the major molecular response data were impressive and statistically significant, albeit not the primary endpoint of the study. The leukemia community is pleased the U.S. Food and Drug Administration has approved bosutinib for first-line use; in this instance, tyrosine kinase inhibitor number 3 is definitely not crowding the field.

IN THE PHASE III BFORE trial reported in the Journal of Clinical Oncology by Jorge E. Cortes, MD, of The University of Texas MD Anderson Cancer Center, and colleagues, the SRC/ABL kinase inhibitor bosutinib (Bosulif) improved response rates vs imatinib in the first-line...