Action to Cure Kidney Cancer (ACKC) was instrumental in securing a $10 million line item for the Kidney Cancer Research Program as part of the Department of Defense’s Congressionally Directed Medical Research Programs (CDMRP). This represents the largest increase ever in the federal budget for kidney cancer research. Grant proposals continue to be accepted.

James Brugarolas, MD, PhD, Head of the Kidney Cancer Program at the University of Texas Southwestern, said, “This $10 million appropriation represents a landmark commitment by the federal government to invest in kidney cancer research and seek a cure for this disease.” 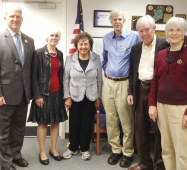