Mixing Metaphors to Change the Language of Cancer 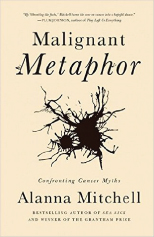 Ms. Mitchell—when she doesn’t succumb to the sirens of metaphor—has written a well-balanced narrative about a cancer patient’s interesting and provocative journey from diagnosis to monitored survivorship. Although this book will please many science-loving laypersons, it is not recommended for readers of The ASCO Post, who might bristle at the mixing of metaphors with the serious business of caring for cancer patients.

Illness is the night-side of life, a more onerous citizenship. Everyone who is born holds dual citizenship, in the kingdom of the well and in the kingdom of the sick.” So begins the small classic Illness as Metaphor, by Susan Sontag. Considered one of the most liberating books of its time, Ms. Sontag, a cancer patient when she was writing the book, shows how the metaphors and myths surrounding certain illnesses, especially cancer, add greatly to the suffering of patients and often inhibit them from seeking proper treatment.

Ms. Sontag’s book was published in 1977, and even though it remains in print and is revered by her large fan base, things have changed for the better in the world of cancer metaphors that she eloquently described. Ms. Sontag died of leukemia at Memorial Sloan Kettering Cancer Center in 2004.

In a new book, science writer Alanna Mitchell takes a risk with the title: Malignant Metaphor. Once Ms. Mitchell stepped into the cancer metaphor territory that was staked out by Susan Sontag, she left her book open to inevitable comparisons, at least on its intellectual merit, to the iconic Illness as Metaphor. And she adds fuel to this fire by referencing Illness as Metaphor numerous times.

The title issue aside, Ms. Mitchell, who is touted on the cover as a bestselling, award-winning science writer, informs the reader that she started writing her book because “cancer barged into my life.… First, my beloved brother-in-law, John, got it. Then, my 21-year-old daughter, Calista, was diagnosed and the quest to understand cancer became even more personal.”

The motif of Malignant Metaphor revolves around the author’s brother-in-law, who is diagnosed with malignant melanoma. She throws herself into his world of cancer treatment, which ultimately enters the alternative treatment realm. Along the way, through clinical trials and multiple doctors and cancer quacks, Ms. Mitchell “confronts and debunks cancer myths.” The subtext is the author’s explorations of the untested waters of cancer treatment, during which she encounters the primal fears people have about cancer. She labors to open a door to new ways of looking at this most feared disease.

Although this cancer story has been told before with different characters and events, there is always room for a well-written human-interest story dealing with the roller-coaster drama of battling a potentially lethal disease. Ms. Mitchell has a friendly writing style and enough compelling characters and plot points that could have raised her story a cut above most in this genre, had she not been so enamored of the metaphor conceit, her unfortunate references to Susan Sontag, and digressions into historical allegories.

For example, Ms. Mitchell writes, “This cultural gloss on cancer, this malignant metaphor, sows immense, widespread blame, shame and fear onto those who are already ill, often fighting for their lives. It spreads to their loved ones and, by osmosis, to a whole society stricken at the thought of getting the disease. Sontag notes that cancer ‘arouses thoroughly old-fashioned kinds of dread,’ and that it felt to be ‘morally, if not literally, contagious.’”

Ms. Sontag made that observation more than 3 decades ago, and by retooling it to somehow make her narrative more elegant, the author seems woefully out of touch with the modern reality of cancer awareness and how far our society has progressed.

Ms. Mitchell continues: “Let me delve more deeply into the trope of culpability or deservedness, which is tightly linked to the idea that cancer is preventable: cancer has come to be interpreted as a billboard for the sufferer’s secret sins. You did something awful and now you’ve been found out, like the transgressors of the Middle Ages who feared an eternity in hell for a single misstep or mis-thought against the teachings of an inflexible church….”

An acclaimed science writer should know that more than half of all human cancers are preventable. Middle Ages? Ms. Mitchell’s time-traveling analogies back to the days of Torquemada are an insult to cancer patients and the oncologists they partner with to fight their disease.

And we are not yet out of the prologue! Again, there is some interesting content in Malignant Metaphor, but the author buries it with her purple prose.

After some interesting backstory about cancer research and various advances in detection and treatment, Ms. Mitchell arrives at her brother-in-law’s cancer diagnosis, what the reader has been waiting for. She writes, “John hadn’t worried about a mole on his flank.… It bore short, rounded tentacles, like a stunted Hydra, the mythic Greek beast that grew two heads for every one hacked off.… He had it removed the day he turned 66.”

While in Nairobi doing AIDS missionary work, John gets the dreaded call via cell phone that the biopsy was positive; he had very aggressive malignant melanoma. From that point, the book gathers speed and interest. The author becomes a knowledgeable support system for John and his wife, as he moves from his first doctor to a second opinion. Ms. Mitchell sums up the Canadian experience: “The doctors in Canada had essentially told John to go home and wind up his affairs…. They had nothing to offer him. John describes the whole tenor of his appointments with the Canadian doctors as ‘funereal.’”

To her credit, Ms. Mitchell drove John from Canada to Memorial Sloan Kettering Cancer Center in New York, where “the attitude could not have been more different…. The tone was upbeat, relaxed, and totally in control of John’s situation.” John was fortunate enough to have renowned surgeon Daniel G. Coit, MD, take over his care. But the prognosis of stage IIIB was daunting, and John ping-ponged between Memorial and Canada, where he got involved in alternative therapies such as a macrobiotic diet, juicing, coffee enemas and massive doses of intravenous vitamin C.

John’s quest for a cure, evidence-based or not, is the most interesting part of the book. It drills deep into the vulnerability of cancer patients as they battle their disease, and this is the terrain that Ms. Mitchell is adroit at describing. Ultimately, John severs his ties and treatments with several alternative practitioners, none of whom are doctors, and entrusts his care to “faith based on the best science available to him.” His journey to that point was, indeed, quite interesting, giving the book much-needed substance.

Ms. Mitchell—when she doesn’t succumb to the sirens of metaphor—has written a well-balanced narrative about a cancer patient’s interesting and provocative journey from diagnosis to monitored survivorship. However, although this book will please many science-loving laypersons, it is not recommended for readers of The ASCO Post, who might bristle at the mixing of metaphors with the serious business of caring for cancer patients. ■