Ibrutinib Bests Standard of Care for Elderly Patients With CLL 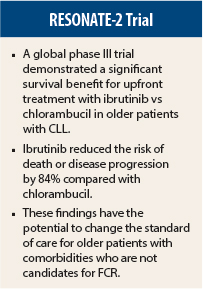 This phase III trial in treatment-naive chronic lymphocytic leukemia confirmed the benefit of ibrutinib in this older population with frequent comorbidities.

These powerful clinical results show superiority over a traditional standard-of-care chemotherapy and have the potential to alter how we treat patients.

First-line treatment with the Bruton’s tyrosine kinase inhibitor ibrutinib (Imbruvica) significantly reduced the risk of dying or disease progression compared with chlorambucil (Leukeran) in older treatment-naive patients with chronic lymphocytic leukemia (CLL) in the RESONATE-2 trial. At the time the study was designed, chlorambucil was standard of care for the elderly CLL population. RESONATE-2 is the first phase III direct comparison of ibrutinib vs chemotherapy in this older population (aged 65 years or older).

“This phase III trial in treatment-naive CLL confirmed the benefit of ibrutinib in this older population with frequent comorbidities. Once-daily ibrutinib was administered, and 87% of patients are continuing on this drug with a median of 1.5 years of follow-up,” said lead author Alessandra Tedeschi, MD, Azienda Ospedaliera Niguarda Cà Granda, Milan, Italy.

“This population is frequently frail and undertreated.… Chlorambucil has been the standard of care. No other regimen has improved survival in the elderly,” she added.

“The data may signal a paradigm shift and demonstrate the value of ibrutinib in the treatment-naive setting. These powerful clinical results show superiority over a traditional standard-of-care chemotherapy and have the potential to alter how we treat patients,” said senior investigator Jan A. Burger, MD, PhD, The University of Texas MD Anderson Cancer Center, Houston, according to a news release from AbbVie, the study sponsor.

Dr. Tedeschi presented these results at the 57th American Society of Hematology (ASH) Annual Meeting and Exposition,1 and results were published online in The New England Journal of Medicine to coincide with her presentation.2

Ibrutinib is currently approved by the U.S. Food and Drug Administration (FDA) for patients treated with more than one prior therapy and those who have deletions in 17p. These results may broaden the indications for FDA approval to include upfront treatment of elderly patients.

The study enrolled 269 patients aged 65 years and older with CLL. These patients had comorbidities that would preclude FCR (fludarabine, cyclophosphamide, and rituximab [Rituxan]) chemotherapy. Exclusion criteria included del(17p) and warfarin. Median age was 73 years; 70% of patients were over age 70. Forty-three patients crossed over to ibrutinib during the course of the trial.

Ibrutinib significantly prolonged progression-free survival, as determined by an independent review committee, reducing the risk of death or disease progression by 84% vs chlorambucil. Median progression-free survival was not reached in the ibrutinib group vs 18.9 months in the chlorambucil group (P < .001) at a median of 18.4 months of follow-up. Ibrutinib significantly prolonged overall survival, with an estimated overall survival of 98% at 24 months vs 85% with chlorambucil (P = .001).

Grade 3 hypertension was reported in 14% of patients on ibrutinib, and this was managed by hypertensive medications with no dose reduction or treatment discontinuation. Atrial fibrillation was reported in 6% of the ibrutinib arm (grade 2 in 6 patients, grade 3 in 2 patients). Two patients discontinued treatment due to atrial fibrillation, and the other patients did not require dose modification.

Disclosure: The study was funded by Pharmacyclics, an AbbVie company. Dr. Tedeschi reported no potential conflicts of interest. Dr. Burger has received research funding from Pharmacyclics. For full disclosures of other study authors, see the abstract at www.hematology.org/Annual-Meeting.