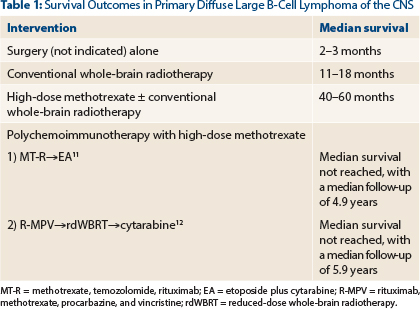 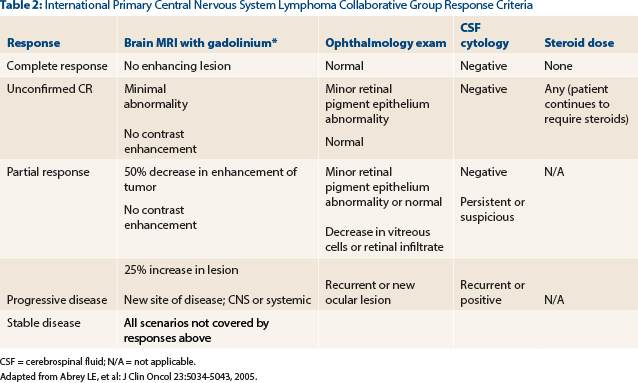 Question 1: Based on the rationale for the current “standard of care” for primary diffuse large B-cell lymphoma of the CNS, what is the optimal induction therapy?

Radiation alone is associated with high response rates, but 66% of patients recur within the tumor bed; this results in disappointing progression-free survival rates and a median overall survival in the range of 11–18 months, leaving few (1%–2%) long-term survivors.4,5 However, whole-brain radiotherapy alone remains a viable option in patients deemed too weak to tolerate high-dose methotrexate.

The overall survival and progression-free survival were 36.9 and 24.0 months, respectively. A total of 58% of patients experienced complete response, with an additional 36% of patients experiencing partial responses, prior to delivery of whole-brain radiotherapy. Older age and intervention with whole-brain radiotherapy, even at a lower dose of 36 Gy (decreased from the original 45 Gy dose in this trial), did not prevent treatment-related deleterious neurotoxicity. Approximately 24% of patients treated with combined chemoradiotherapy for diffuse large B-cell lymphoma of the CNS developed serious neurotoxicity, which increased over time.10 Thus, optimal treatment for patients with diffuse large B-cell lymphoma is poorly defined, due to a lack of randomized phase III trials.

Our patient started induction therapy as outlined in the CALGB 50202 (Alliance 50202) trial. This induction regimen (which included high-dose methotrexate, leucovorin, rituximab, and temozolomide) has proved to be effective and well tolerated in adults up to age 74.11 Following induction therapy, the disease is re-assessed, and in this particular protocol, consolidation therapy with cytarabine and etoposide is delivered to patients who achieve complete response or unconfirmed complete response.

The CALGB 50201 (Alliance 50202) protocol successfully eliminated the risk of radiation-induced neurotoxicity by omitting consolidative whole-brain radiotherapy without jeopardizing outcomes (Table 1). Whole-brain radiotherapy still may have an important therapeutic position, albeit at a lower dose than 30 Gy when combined with polychemoimmunotherapy.

Question 2: This patient would be classified as having which of the following International Primary Central Nervous System Lymphoma Collaborative Group response criteria?

The patient has demonstrated a near resolution of all radiographic abnormalities. The response noted on his scan is greater than the ≥ 50% reduction in the cross-sectional area of enhancing tumor necessary for a partial response. A complete response would require a complete resolution of the enhancement in addition to negative cerebrospinal fluid cytology (if previously positive) and negative ophthalmologic slit lamp examination—all while the patient is not on steroids for at least 2 weeks. Due to the small amount of residual enhancement likely representative of gliosis at the biopsy site, our patient is categorized as having an unconfirmed complete response13,14 (Table 2).

Question 3: What is the optimal consolidation therapy?

There remain many unanswered questions in the management of primary diffuse large B-cell lymphoma of the CNS. This question highlights controversies related to consolidation therapy in patients with this type of lymphoma. At present, the optimal consolidation therapy for patients with primary diffuse large B-cell lymphoma of the CNS is not clear. As previously stated, high-dose methotrexate–based regimens have utilized both chemotherapy and whole-brain radiotherapy as part of consolidation therapy, with favorable outcomes (Table 1). However, in older adults (particularly those ≥ age 60), there are substantial concerns of deleterious neurotoxicity with whole-brain radiotherapy.10 In addition, consolidation with polychemotherapy (ie, etoposide plus cytarabine) in older adults did not adversely affect outcomes.11

For these multiple reasons, we utilized the CALGB 50201 (Alliance 50202) protocol for our patient outside of a clinical trial. Other viable options exist as well for this patient population. There are two ongoing phase II National Cancer Institute–sponsored cooperative group studies evaluating the role of different treatment modalities for consolidation after predefined induction chemoimmunotherapies.

1) CALGB 51101 (NCT01511562): MT-R followed by consolidative EA vs high-dose chemotherapy using carmustine and thiotepa with autologous cell rescue for patient between the ages of 18 and 75.

Our patient was offered the choice of the CALGB 51101 trial, but he elected to be treated off trial on the CALGB 50201 (Alliance 50202) protocol. After completing consolidation therapy with etoposide plus cytarabine, he remains in remission and is scheduled for a clinic visit soon. ■