A sizable proportion of bladder cancer patients who would benefit from neoadjuvant chemotherapy are not receiving it, researchers from the University of Wisconsin School of Medicine and Public Health, Madison, concluded.

Their conclusion was based on their assessment of the neutrophil/lymphocyte ratio as a way to identify patients with non–organ-confined disease, who may benefit from neoadjuvant chemotherapy.1 Aaron Potretzke, MD, a urology resident, and Tracy M. Downs, MD, FACS, Senior Investigator and Director of the Bladder Cancer Program, reported the findings, which earned the “Posters of Exceptional Merit” award at the 97th Annual American College of Surgeons Clinical Congress in San Francisco.

“We are limited in our ability to predict the final pathologic stage of bladder tumors. This is evidenced by the fact that 50% of radical cystectomy cases are upstaged, and, more importantly, 43% are upstaged from previously organ-confined disease to non–organ-confined disease, which has a tremendous impact on prognosis and outcomes,” Dr. Potretzke said.

In patients with non–organ-confined disease, neoadjuvant chemotherapy has proven overall and cancer-specific survival benefits for T3 bladder cancer. Therefore, these patients need to be identified prior to cystectomy, he said.

The neutrophil/lymphocyte ratio is an indication of the immune system’s capacity to fight off malignancy and metastasis. It is predictive in gastric, colon, ovarian, pancreatic, and lymphatic cancers, Dr. Potretzke explained. 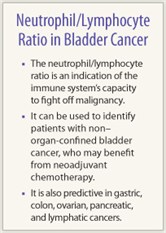 More importantly, this difference in neutrophil/lymphocyte ratio was also observed between non–organ-confined and organ-confined groups: 4.17 vs 2.60 (P = .002).

“Finally, we determined that 22 patients would have been upstaged based on their preoperative neutrophil/lymphocyte ratio,” Dr. Potretzke said. “We would have at least counseled these patients as to the benefits of neoadjuvant chemotherapy, which could have had a real clinical impact.”

The investigators will be implementing neutrophil/lymphocyte ratio in their clinic, and will further assess its utility in a clinical trial in which patients with a high ratio will be randomly assigned to neoadjuvant chemotherapy or immediate cystectomy, he said.

Barbara L. Bass, MD, of Methodist Hospital in Houston, who moderated the Posters of Exceptional Merit session, said this research “has the potential to become clinically practice-changing.” ■