Medicare Reimbursement to Physicians: Déjà Vu All Over Again

In February 2011, The ASCO Post published an opinion piece (“Congress and the ‘Doctor Fix’: Looking Back, Looking Ahead”) about the ping-pong of legislative continuing resolutions to avert a 21.3% cut in physician reimbursement. These continuing resolutions were necessary because the Affordable Care Act, signed into law on March 25, 2010, did not address physician reimbursement and the sustainable growth rate in order to meet Congressional Budget Office constraints. Also in response to the Act’s budget targets, at least $500 billion was cut from Medicare despite the baby boomer population entering its ranks. 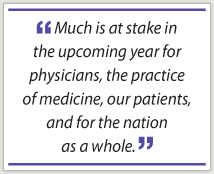 A separate piece of legislation, Senate Bill (SB) 1776, known as the “Doctor Fix,” was introduced October 21, 2009 in exchange for American Medical Association (AMA) support of the Act. While eliminating the sustainable growth rate formula, this legislation would have frozen physician payments for 10 years. Although not indexed to inflation, physicians were willing to trade a decade of certain Medicare reimbursement for the recurring crises caused by Congressional inaction about the sustainable growth rate issue. However, SB 1776 failed to pass because it was purportedly not compliant with the “pay-as-you-go” Congressional provisions.

Enacting a series of temporary patches to the problem, Congress has continued its wrangling over the issue, leading to three delays in Medicare reimbursement in 2010, for more than a month of delayed physician reimbursement without interest (see sidebar).

Once again, a crisis looms. A 29.5% cut in Medicare is scheduled to occur January 1, 2012, on the cusp of a presidential election year. Now that the Joint Select Committee on Deficit Reduction has been unable to trim $1.2 trillion in federal spending, it will result in an additional 2% reduction in physician reimbursement. When added to the scheduled cut, this would result in a total reduction of 31.5% in Medicare reimbursement for physicians.

The Obama administration now indicates support for a 2-year sustainable growth rate fix. This fits the timeline for the implementation of the authority of the Medicare Independent Payment Advisory Board. The advisory board, with a $15 million appropriation for 2012 alone, has the authority to limit the growth of Medicare spending. By September 1, 2013, the advisory board must submit draft proposals to limit Medicare spending to the Medicare Payment Advisory Committee and the Secretary of Health and Human Services. By August 15, 2014, the Secretary must implement the advisory board proposal, unless Congress enacts an alternative that achieves the required level of Medicare savings. If Congress does not pass such legislation, or if the President vetoes the legislation and the veto is not overridden, the Secretary is required to implement the Independent Payment Advisory Board.

Yogi Berra was right—it’s déjà vu all over again. While sustainable growth rate fixes have been addressed over more than a decade, the ping-pong process over the past 3 years is unprecedented. As of this writing, the fix has been addressed only in the current House of Representatives. With the Thanksgiving deadline for deficit reduction, it is doubtful that this issue will be addressed, as with previous experience, until the deadline.

While a 2-year sustainable growth rate fix will be approved for political reasons, physicians and patients should face the reality of an administration, if reelected, that will no longer face another election challenge or respond to political pressure. The physician reimbursement cuts recently proposed by the Medicare Payment Advisory Committee and the extensive level of Medicare savings required of the Independent Payment Advisory Board in approximately 2 years portend a bleak future for Medicare reimbursement of physician services.

Physicians, unlike any other government contractor, have routinely faced a 20% to 30% cut in reimbursement for their services. Meanwhile, the federal government has grown by more than 25% over the past 3 years, and the total compensation package of federal workers has increased dramatically and is twice that of workers in the private sector. While physicians repeatedly have gone hat in hand to Congress and the President to avert sustainable growth rate cuts, very little of the additional $4 trillion in debt over the past 3 years has been paid to physicians caring for a burgeoning Medicare and Medicaid population.

The weakness of physicians in the political process was clearly demonstrated during the process of the passage of the Affordable Care Act. This weakness of the physician political lobby was confirmed through the poorly negotiated deal made between the AMA and the administration; in exchange for supporting the Act, the administration promised passage of a favorable sustainable growth rate fix for the AMA. The fix failed passage in the Senate as Republicans and retiring Senate Democrats voted against the legislation.

The month-long extensions that averted cuts in reimbursement were a purposeful manipulation to prove once again how dependent physicians are upon the federal government for their livelihood. In oncology, where 70% of patients treated are insured by Medicare, there is a de facto single-payer system. Much is at stake in the upcoming year for physicians, the practice of medicine, our patients, and for the nation as a whole. ■

Disclosure: Dr. Janjan is Senior Fellow in Healthcare Policy. Dr. Goodman is President and CEO, National Center for Policy Analysis, a nonprofit think tank established in 1983 and headquartered in Dallas.