Although a rare occurrence, men do get breast cancer, and when they do, it has a distinct biology from that of female breast cancer. About 90% of cases most closely resemble postmenopausal female invasive ductal carcinoma, and 10% are ductal carcinoma in situ (DCIS), which accounts for 25% of breast cancer cases in women. Lobular breast cancer is not found in men, noted Florian Otto, MD, of the Tumor and Breast Center (ZeTuP) in St. Gallen, Switzerland. Dr. Otto described male breast cancer at the European Multidisciplinary Cancer Congress in Stockholm.

Male breast cancer is usually close to the nipple and manifests as a hard nontender mass. Skin ulceration can occur, and lymph node involvement is more frequent in male breast cancer than in females. Mean tumor size at diagnosis is 24 mm, Dr. Otto said.

“For males, the incidence of breast cancer increases with age, while for females, it plateaus at around age 60,” Dr. Otto continued. 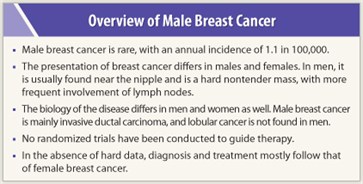 Men with risk factors such as the BRCA2 mutation, the CHEK2 gene, and Klinefelter syndrome (characterized by narrow shoulders, wide hips, female-type pubic hair, gynecomastia, and smaller testicles) should be screened with monthly self-exam and semiannual clinical exam, and baseline mammogram followed by annual mammogram for gynecomastia. Other risk factors include conditions and procedures resulting in an altered estrogen-to-testosterone ratio, such as orchiectomy, congenital hernia, liver cirrhosis, and obesity.

“The BRCA2 mutation accounts for about 5% to 15% of male breast cancer, and this mutation confers a fivefold greater risk of prostate cancer,” he said. 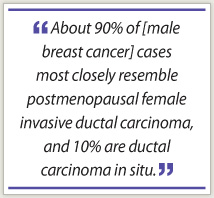 “Male breast cancer is a neglected area, with little data to inform treatment selection. We have no randomized trials with enough patients to guide treatment,” he said. Surgery and adjuvant chemotherapy are the mainstays of treatment; breast-conserving surgery is not done in men, and it is not clear which adjuvant therapies are preferred. “Any adjuvant therapy appears to improve overall survival,” he noted.

Postoperative radiotherapy is given to men with at least three positive lymph nodes, and/or large tumor size with muscle invasion or skin involvement.

“There are no data on anti-HER2 therapy in male breast cancer. No drugs are registered for this indication,” Dr. Otto said.

In the absence of randomized, controlled trials, treatment of metastatic breast cancer in males can only be guided by case reports, he continued. Choices for hormone receptor–positive cases include tamoxifen, aromatase inhibitors, fulvestrant (Faslodex), or gonadotropin-releasing hormone (GnRH) agonists. There is no standard therapy for hormone receptor–negative cases or for antihormonal therapy–resistant disease. Trastuzumab (Herceptin) should be used in HER2-positive disease. ■