The addition of panitumumab (Vectibix) to chemotherapy improved overall and progression-free survival in patients with recurrent or metastatic squamous cell carcinoma of the head and neck, but its benefit was limited to patients whose tumors were negative for the human papillomavirus (HPV).1

The subanalysis of the phase III SPECTRUM trial, reported at the 2011 European Multidisciplinary Cancer Congress in Stockholm, examined whether subsets of patients benefit more than others to the addition of panitumumab plus platinum-based therapy (cisplatin and fluorouracil). Investigators had previously reported that patients who received the epidermal growth factor receptor (EGFR) inhibitor had a significant improvement in progression-free survival but not overall survival, vs the chemotherapy-alone arm.

The current study is the first report of treatment outcomes related to HPV status with any drug in the first-line treatment of recurrent or metastatic squamous cell head and neck cancer, according to lead investigator Jan B. Vermorken, MD, PhD, of the Antwerp University Hospital in Belgium.

SPECTRUM evaluated panitumumab in 657 patients with recurrent or metastatic disease, of whom 411 (63%) provided evaluable tissue samples for assessing HPV status. Of these, 23% were HPV-positive (ie, staining of ≥ 10% of cells) and 77% were HPV-negative.

Survival Improved Only in HPV-negative Subset 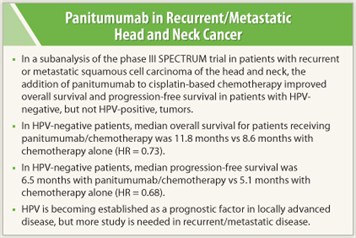 The addition of panitumumab resulted in improved overall survival, but only in the HPV-negative subset, whose median overall survival was 11.8 months vs 8.6 months in the chemotherapy arm: a 27% statistically significant reduction in the risk of death (P = .02). In contrast, in the HPV-positive subset, the addition of panitumumab was associated with a risk reduction of only 4% (HR = 0.96; 95% CI = 0.59–1.57, P = .88), Dr. Vermorken reported.

“The survival was strikingly and significantly different in the HPV-negative patients who received panitumumab, and this was not the case in the HPV-positive patients,” he noted.

The effect of panitumumab in HPV-negative patients was confirmed in the Cox regression analysis, taking into account the other independent variables, including performance status, prior platinum use, smoking habits, and severe weight loss. The tests for interaction, however, were not significant (P = .332 for overall survival and .097 for progression-free survival), possibly due to small numbers of patients in the HPV-positive subset.

In the chemotherapy-only arm (comprising 190 of the 411 evaluable patients), he added, there was a trend for a more favorable outcome in patients with HPV-positive tumors. However, “this should be confirmed in an independent dataset,” he said.

Expert Point of View: Benefit of Panitumumab Seen Primarily in Patients with Recurrent or Metastatic Head and Neck Cancer and HPV-negative Tumors

Expert Point of View: Benefit of Panitumumab Seen Primarily in Patients with Recurrent or Metastatic Head and Neck Cancer

Discussing the presentation, Jean Bourhis, MD, PhD, of the Institut Gustave Roussy in Villejuif, France, said that while HPV has become a major prognostic factor in locally advanced head and neck cancer, its prognostic value in recurrent and metastatic disease is less clear. 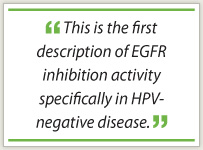