The text and photograph here are excerpted from a four-volume series of books titled Oncology: Tumors & Treatment, A Photographic History, The Anesthesia Era 1845–1875 by Stanley B. Burns, MD, FACS, and Elizabeth A. Burns. The photograph appears courtesy of Stanley B. Burns, MD, and The Burns Archive. To view additional photos from this series of books, visit burnsarchive.com.

Anesthesia not only offered patients insensibility, but it also offered surgeons the precious commodity of time. Prior to anesthesia, only the steely nerved physician was able to perform elective surgery despite the patient’s agony. A surgeon’s reputation depended on how quickly he could perform an operation. Master surgeons could amputate an arm in 1 minute or a leg in 3 minutes. With the extended time granted by anesthesia for operations, surgical adventurism quickly became the order of the day.

Cancer operations were attempted earlier in the course of the disease, and more extensive procedures were performed. Surgeons operated in their street clothes or donned special gowns decorated with the blood and gore from their prior operations. Instruments and dressings were washed only at the end of the day, not at the end of each operation. Unfortunately, under these nonsterile conditions, patient morbidity and mortality were significant.

On October 16, 1846, a public demonstration of reportedly the first surgical procedure showing the anesthetic effects of sulfuric ether was performed by dentist William T.G. Morton (1819–1868). The photographer, Josiah J. Hawes, was present and ready to record the event, but he became so unnerved by the sight of blood that he did not take the picture. This later daguerreotype, taken by Hawes, featured a team of 10 physicians, which included Chief Surgeon John Collins Warren, MD (1778–1856). Morton was not a member of this surgical team.

Pioneers in General Anesthesia: Fighting for Rights to Primacy

Three men were associated with the attempt in Boston to bring anesthetic effects into general use. Dentist Horace Wells (1815–1848) recognized nitrous oxide’s ability to produce anesthesia. In 1844, he tried to use it in a public demonstration at Massachusetts General Hospital. Although the theory was correct, the demonstration failed.

Charles Thomas Jackson (1805–1880), a chemist, suggested the use of sulfuric ether as an anesthetic to Morton. Although Morton was successful in his demonstration, unfortunately, he was greedy and attempted to keep the properties of the gas secret. He named it “Letheon” and hoped to secure a patent. He did not mention Jackson’s critical role in its development.

The pioneers Morton, Jackson, and Wells, involved in the discovery of anesthesia use at Massachusetts General Hospital, fought for rights to primacy. They all died poor and in dire circumstances.

Morton died at age 49 on July 15, 1868, in New York’s Central Park. He suffered a stroke after reading a magazine report supporting Wells’ claim.

Jackson spent his life fighting against the findings of the U.S. government and others that Morton was the sole inventor. Jackson went insane at Boston’s Mount Auburn Cemetery after reading Morton’s monument, which described Morton as the inventor. Often in restraints, Jackson spent his remaining years at McLean Asylum in Somerville, Massachusetts. He died on August 28, 1880.

Wells also suffered a tragic ending. Not achieving due credit for his work in the promotion of anesthesia, he, too, went insane. He committed suicide in his jail cell when he was arrested for throwing ether on women in New York City.

Ironically, another physician, Crawford Williamson Long, MD (1815–1878), was credited with being the first to use sulfuric ether as an anesthetic. Long, a country doctor from Jefferson, Georgia, started using ether in March 1842. However, as he was out of the academic circle and perhaps did not fully appreciate his own discovery, he did not publish his results until 1849. Luckily, other physicians witnessed several of his early operations, and their affidavits validated his claim.

Long had gotten the idea in the winter of 1841, when some chemistry students participating in nitrous oxide parties asked him to prepare some of the gas for them. Long didn’t know how to make nitrous oxide, but he did know how to make sulfuric ether, which was supposed to have similar physical effects upon inhalation. At the party, Long noticed the men were having hilarious fun with no physical reaction to the bruises caused by their slips and falls. On this basis, he reasoned the sulfuric ether gas must have an anesthetic effect and decided to use it on his surgical patients. 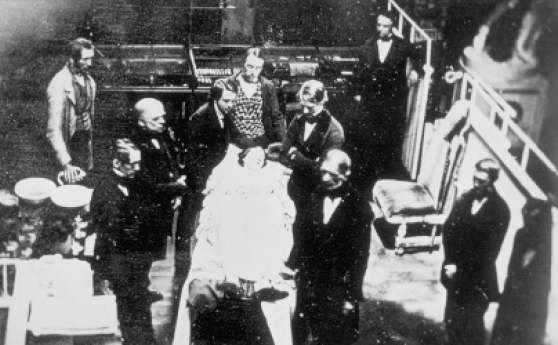