The text and photograph here are excerpted from a four-volume series of books titled Oncology: Tumors & Treatment, A Photographic History, The Antiseptic Era 1876–1900 by Stanley B. Burns, MD, FACS, and Elizabeth A. Burns. The photograph appears courtesy of Stanley B. Burns, MD, and The Burns Archive. To view additional photos from this series of books, visit burnsarchive.com.

This is a rare photograph of an older patient with a primary ocular tumor. These tumors are uncommon in older individuals, so most photographs of retinoblastoma or rhabdomyosarcoma featured children. As a rule, there was no attempt to remove these tumors surgically, and the children were given only supportive therapy until they died. In this preantiseptic era, fear of death from infection, inherent with surgical intervention, kept many patients from seeking timely care. People lived and died with disease states and deformities that are incomprehensible in today’s world. However, it was more common for patients with eye tumors to seek treatment because those afflicted lost their sight and became grossly disfigured. 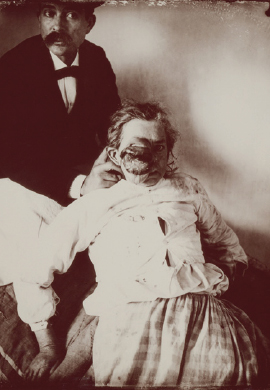 If sought quickly enough, depending upon the type of tumor, extirpation of the globe could be curative. Rhabdomyosarcoma is the most common malignant tumor of childhood. In 25% of metastatic breast disease cases, cancer spreads to the central nervous system, including the choroid of the eye. Retinoblastoma, primarily a congenital malignant tumor in childhood, will very rarely occur in early adulthood but not in older age.

It is a safe assumption that the older woman in this photograph did not seek medical care until her tumor was in an advanced state. Although this patient is small in stature, her hands reflect her age. She could have been suffering from a sarcoma, though it was more likely a malignant melanoma of the uvea, the primary type of malignant inner eye tumor in the elderly. A tumor this massive is very rare.