I Do Not Have a Multiple Myeloma Precursor Condition. Why Not?

For the country, and for me personally, 2001 was a watershed year. In May, my mother died; the following month my brother, Dom, then 57, called to tell me he had just been diagnosed with multiple myeloma. Except for some fatigue Dom had complained about at our mother’s funeral, there were no obvious signs he had a terminal illness.

At the time, the prognosis for myeloma with conventional treatment—chemotherapy with or without autologous stem cell transplantation—was just 2 to 3 years. The cancer is so rare—about 32,000 new cases will be diagnosed in 20191—the only other person with myeloma I had heard about was former Congresswoman and Vice-Presidential nominee Geraldine Ferraro. Just 2 weeks before Dom’s diagnosis, Ms. Ferraro announced she was being treated for multiple myeloma, having been diagnosed 2 years earlier.

“Geraldine Ferraro has myeloma,” I told Dom. “She’s doing well, and you will, too.” I noted with interest that the congresswoman was being treated with thalidomide, a drug banned in the 1960s (see sidebar below).

Over the next few weeks, Dom researched his treatment options and conferred with four myeloma specialists to determine his next best course of action. Three of the specialists recommended the transplant. The fourth agreed that although the transplant was likely the best approach to try to achieve a potential cure, he also told Dom, “Why not try something that is less drastic, less painful, less altering in terms of your life, and see if that works first?”

Concerned that a stem cell transplant offered only a small chance at a cure—less than 10%2—and would interrupt his academic career, Dom agreed and opted to try thalidomide (see sidebar) along with an experimental regimen that included dexamethasone and monthly infusions of the bone-strengthening bisphosphonate pamidronate disodium. 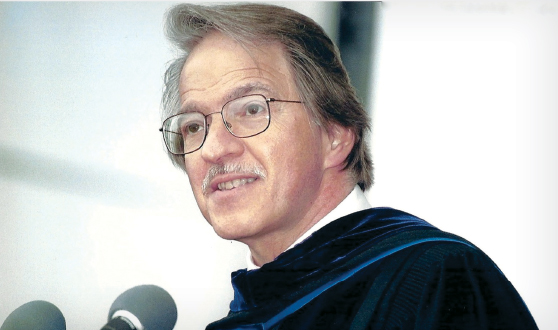 Dominick Cavallo, PhD, served in several faculty positions during his 31-year career at Adelphi University in Garden City, New York, including Vice Provost for Academic Affairs and Planning, Dean of Adelphi’s University College, and Professor of American History. Diagnosed with multiple myeloma in 2001, he died from the cancer on March 11, 2011. The PROMISE study aims to turn myeloma into a preventable disease.

Within a year, the cancer was stable, although the treatment left Dom with myriad side effects, including fatigue and neuropathy in his hands and feet. During that time, he was able to maintain a vigorous teaching schedule and lead an unrestricted lifestyle.

In early 2000, progress in myeloma treatment was happening at a head-spinning pace. When Dom’s myeloma became resistant to thalidomide, he switched to the proteasome inhibitor bortezomib, which was granted U.S. Food and Drug Administration approval in the treatment of relapsed or refractory myeloma in 2003.3 Over the next 9 years, Dom underwent a series of experimental therapies to control recurring relapsing/refractory disease, which largely enabled him to continue living a fairly high-quality life. The cumulative effects from the treatments, however, eventually caused cardiotoxicity and required a stent to unblock a coronary artery.

When Promise Turns to Disappointment

I became an avid advocate for Dom and researched novel treatments on the horizon—one more promising than the next—to extend response long enough to hopefully bridge to more effective therapy. I attended scientific conferences and was buoyed by the enthusiasm of the researchers, who were cautiously declaring myeloma a manageable—if still incurable—disease. “You will not die of this cancer,” I remember telling Dom, convinced he would continue to benefit from research advances.

Dom was brilliant and generous and had a quick wit that was impossible to resist.
— Jo Cavallo

So, it was especially shocking—and heartbreaking—that after nearly 10 years of successfully controlling the cancer, the therapies then available could not keep pace with the sudden, uncontrollable progression of the disease. On March 11, 2011, Dom died of complications of multiple myeloma.

Determining the Triggers of Multiple Myeloma

Over the years since Dom’s death, advances in multiple myeloma research are getting close to reaching the early promise of truly converting the disease into a chronic cancer. Some survivors can live for many years—and, in some cases, decades. And that’s good news.

When Dom was diagnosed in 2001, other than age—most people with the cancer are older than age 654—little was known about the causes of multiple myeloma. The cancer has long been linked to environmental factors, including exposure to the defoliant Agent Orange, commonly used during the Vietnam War to

THE ROCKY ROAD OF THALIDOMIDE

Thalidomide was banned from use in the United States in 1960 after it caused severe birth defects in babies born to women in Europe and Canada who had taken the drug to prevent morning sickness. It was never approved by the U.S. Food and Drug Administration (FDA) for that purpose. In 1998, thalidomide was approved by the FDA as a treatment of leprosy, and it was showing potential efficacy in a range of other diseases, including HIV/AIDS and cancer.

Recognized for its significant antiangiogenic properties, in the late 1990s, thalidomide was investigated in a landmark clinical study of 84 patients with refractory multiple myeloma—a hematologic malignancy shown to be angiogenesis-dependent. Published in the The New England Journal of Medicine, the study results found that 32% of the patients had a response to thalidomide, paving the way for the first new drug with single-agent activity in myeloma in more than 3 decades. Although thalidomide did not receive FDA approval for the treatment of myeloma until 2006, by early 2000, it was being used off-label for the cancer.

eliminate forest cover, but Dom had not fought in that war. There is also an association between the use of aerial spraying of pesticides—still underway in the 1950s when we were children—and increased myeloma risk. But if that is the explanation, why did Dom develop the cancer and not me or my younger brother, Sam? Presumably, we were all exposed to the same environmental carcinogens during childhood. And there is no history of multiple myeloma or any other cancer type in our immediate family to offer up a clue.

The mystery of what triggered catastrophic genomic instability in Dom’s DNA leading to his development of myeloma may never be solved. However, research has determined that individuals with a familial history of the disease have between a twofold and fourfold increased risk of developing the cancer—African Americans have a threefold increased risk—so the genetic link is becoming clearer.5

Recently, I enrolled in the PROMISE clinical trial to honor Dom and others with the cancer and to make a contribution to understanding why some high-risk individuals for myeloma develop the cancer and others do not. The study is recruiting first-degree relatives of people diagnosed with multiple myeloma or one of its precursor conditions (monoclonal gammopathy of undetermined significance, smoldering myeloma, Waldenström’s macroglobulinemia) and African Americans with or without a family history of the disease. The goal of PROMISE is to determine the clinical and genomic alterations present in individuals with monoclonal gammopathy of undetermined significance or smoldering myeloma, as well as the clinical, genomic, epigenetic, and immune environmental predictors of progression to multiple myeloma in individuals with these precursor conditions; the study also will investigate therapies to prevent progression to myeloma.

My Part in PROMISE

After qualifying for the study, I was sent a blood collection kit, which I took to a nearby lab as directed to have three vials of blood drawn and sent to the study investigators for analysis. Within days, I was e-mailed the good news: I tested negative for myeloma precursor conditions and was accepted into the “screen-negative” cohort of the PROMISE study.

In addition to the blood samples I submitted, I answered a comprehensive questionnaire on my health history and current health status, my daily activities, and the concerns I have about being diagnosed with cancer, to provide the study researchers with information that might help explain why multiple myeloma develops in some people and not others. Because I am still considered at high risk for developing the cancer, I will be asked to complete additional questions annually regarding my health, lifestyle, and environmental exposure. I also will be asked to submit another blood sample in 3 years to determine whether I have developed precursor myeloma in the interim.

Dom was brilliant and generous and had a quick wit that was impossible to resist. He was the beneficiary of rapid advances in myeloma treatment that made it possible for him to live many years beyond the usual survival for this cancer at the time. It was reassuring to learn that I currently do not have precursor myeloma, although I can’t help wonder why the cancer may have bypassed me.

Dom would be thrilled to know about the PROMISE study and its potential to turn myeloma into a preventable cancer. I am grateful for the opportunity to participate in the study and hope my involvement contributes to making that goal a reality. ■