Addition of Daratumumab Increases Benefit of Carfilzomib/Dexamethasone in Multiple Myeloma

In patients with relapsed or refractory multiple myeloma, the addition of daratumumab to carfilzomib plus dexamethasone improved multiple outcomes, compared with carfilzomib/dexamethasone alone, in the international phase III CANDOR trial.1

Dr. Usmani presented the primary analysis of CANDOR, which enrolled 466 patients with up to three prior lines of therapy and who achieved at least a partial response to at least one of those treatments. Of the 466 patients (median age = 64 years), 42.3% received prior lenalidomide-based regimens and 90.3% received previous bortezomib. One-third of patients were refractory to lenalidomide.

Patients were randomly assigned 2:1 to KdD or Kd. All participants received carfilzomib as a 30-minute infusion on days 1, 2, 8, 9, 15, and 16 of each 28-day cycle. Daratumumab (8 mg/kg) was administered intravenously on days 1 and 2 of cycle 1, at 16 mg/kg once weekly for the remaining doses of the first two cycles, then every 2 weeks for four cycles (cycles 3–6), and every 4 weeks thereafter. All patients received 40 mg of dexamethasone (20 mg if aged > 75). The primary endpoint was progression-free survival.

After a median follow-up of approximately 16 months, -CANDOR met its primary endpoint. Median progression-free survival was not reached for the KdD arm and was 15.8 months for the Kd arm (hazard ratio [HR] = 0.63; P =.0014). 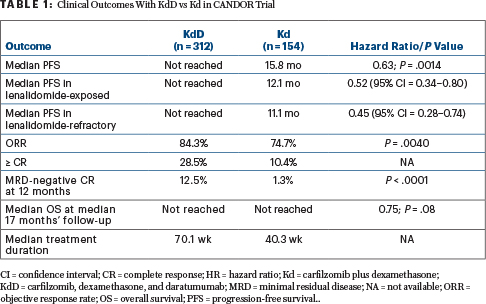 The incidence of grade≥ 3 adverse events was 82.1% and 73.9% in the KdD and Kd arms, respectively, with serious adverse events seen in 56.2% and 45.8%. The rate of treatment discontinuations was similar in both arms—around 24%.

The frequency of grade ≥ 3 cardiac failure was 3.9% with KdD and 8.5% with Kd; this led to discontinuation of carfilzomib in 3.9% and 4.6%, respectively. Five deaths were reported as treatment-related, all in the KdD arm (pneumonia, sepsis, septic shock, Acinetobacter infection, and cardiorespiratory arrest [1 each]). ■

Joshua Richter, MD, Assistant Professor of Medicine, Hematology, and Medical Oncology at the Tisch Cancer Institute at Mount Sinai in New York, offered his thoughts on the CANDOR study, noting that the findings point to “a new and exciting treatment regimen for our patients ...