Current Perspectives on the Treatment of Breast Cancer

“We are on the cusp of a new way to treat breast cancer,” Mary L. (Nora) Disis, MD, said in summarizing advances using immunology to treat breast cancer. Immune checkpoint inhibitors, adaptive T-cell therapies, and vaccines can enlist and rev up the immune system and be combined with chemotherapy for added clinical benefit. “The goal is to get a thrust of T cells that will give us an immune response, which we hope will be a complete response,” she said. “Then the long-term issue is how to propagate and maintain that immune response over the period of time we need to ensure complete tumor eradication.”

“The immune system recognizes most breast cancers, about 80%, and the pathway to that recognition is pretty well defined,” Dr. Disis said. “As long as there is antigen and the T cells have been primed, they are going to keep expanding until that antigen is completely eradicated. That is the perfect picture.”

As long as there is antigen and the T cells have been primed, they are going to keep expanding until that antigen is completely eradicated. That is the perfect picture.
— Mary L. (Nora) Disis, MD

Creating that perfect picture, however, requires a microenvironment that supports a tissue-destructive immune response. “That is usually dictated by those innate immune cells, because when those antigen presenting cells get their signals, they start secreting cytokines,” Dr. Disis said. Those cytokines signal whether to create a microenvironment that is destructive or not.

Breast cancer generally has “a very low mutational burden,” Dr. Disis noted. Only 3% of patients with breast cancer have sufficient mutational burden to allow enough neoantigens to present and interact with immune receptor molecules and cause a danger signal. Most breast cancers develop an adaptive immune response to nonmutated aberrantly expressed proteins. “When those proteins are recognized by the immune system, they don’t give a danger signal,” Dr. Disis said. “They are abnormally expressed, but the immune system does see them as a normal cell protein,” and the result is “more of a wound-healing type of response.”

In this chronic inflammatory state are suboptimally activated T cells that don’t eradicate the tumor all at once. “We know they can work if we can block those immune checkpoints, because suboptimal T cells are the ones that are causing responses that we see in melanoma and non–small cell lung cancer and in some patients with triple-negative breast cancer,” Dr. Disis noted.

“Most patients with breast cancer have some type of inflammation and adaptive immune response against their tumor. So, most patients express low levels of programmed cell death ligand 1 (PD-L1),” Dr. Disis noted.

Triple-negative and HER2-positive breast cancers have the highest incidence and level of tumor-infiltrating lymphocytes, and for every 10% increase in tumor-infiltrating lymphocytes, there is an increased chance of pathologic complete response, a decreased risk of relapse, and improved overall survival. “More is better for T cells,” Dr. Disis said.

Data from thousands of patients about the prognostic value of tumor-infiltrating lymphocytes have led to studies with immune checkpoint inhibitors. Dr. Disis reviewed results showing a modest clinical response rate to single-agent pembrolizumab (Keytruda) among patients with previously treated breast cancer and low levels of PD-L1 expression in the tumor or stroma.

In KEYNOTE-086, among patients with triple-negative breast cancer who received pembrolizumab as front-line therapy and were PD-LI–positive, the response rate rose to 23%, with 3 complete responses, vs 4.7% among previously treated patients with any PD-LI expression.

“Subsequently we have learned that there are many mutations and many oncogenic alterations that occur as breast cancer progresses that really affect the immune system and affect T-cell function directly,” Dr. Disis noted. “We now know that response rates are higher in untreated patients, and perhaps we should be looking at the integration of immune checkpoint inhibitors earlier during therapy.”

Another major insight is that clinical benefit may increase by combining the checkpoint inhibitor with chemotherapy, Dr. Disis said. In the I-SPY 2 trial, patients with locally advanced triple-negative or hormone receptor–positive/HER2-negative breast cancer received neoadjuvant paclitaxel with or without pembrolizumab. “When you look at the data for pembrolizumab vs chemotherapy alone, we have a significant overwhelming benefit from the addition of an immune checkpoint to chemotherapy for pathologic complete response,” Dr. Disis reported. “This is now going into phase III trials.”

Subsequent to the 2018 Annual Lynn Sage Breast Cancer Symposium, it was reported at the European Society for Medical Oncology (ESMO) 2018 Congress that patients with metastatic triple-negative breast cancer not previously treated for metastatic disease had improved survival with nab-paclitaxel (Abraxane) and the anti–PD-L1 antibody atezolizumab (Tecentriq) vs chemotherapy alone. In the phase III IMpassion130 trial, the combination therapy reduced the risk of disease progression or death by 20% overall and by 38% in patients expressing PD-L1.

The results “will change the way triple-negative breast cancer is treated,” according to the study’s first author, Peter Schmid, MD, PhD, Clinical Director, St. Bartholomew Breast Cancer Centre, Queen Mary University of London. “Atezolizumab in combination with nab-paclitaxel is the first targeted treatment to improve survival in metastatic triple-negative breast cancer. It is also the first immune therapy to improve outcome in this cancer. Most of the survival benefit was seen in patients with PD-L1–positive tumors.”2,3

“Triple-negative breast cancer has the most tumor-infiltrating lymphocytes, and it may be the most elemental problem in breast cancer is that we simply need to increase the number of tumor-infiltrating lymphocytes in the tumors of the right phenotype so that they can be unleashed,” she noted. For about 80% of breast cancers, “we have the possibility to be able to push those numbers of T cells so that they can be activated and unleashed,” resulting in the resolution of breast tumors, as they have for other tumors.

“In the field of tumor biology, many strategies are focused now on a single question,” Dr. Disis said. “How can we prime T cells to home effectively to the tumor and cause lots and lots of tumor-infiltrating lymphocytes?” Dr. Disis is focusing on vaccines and adaptive T-cell therapies. “We are in a new era of vaccines,” she said, and of understanding more about the immune system.

For more on immunotherapy in triple-negative breast cancer and the results of the phase III IMpassion130 trial, see a discussion between Lisa A. Carey, MD, and Sherene Loi, MD, PhD, on The ASCO Post Newsreels at ASCOPost.com.

Mutations are neoantigens, those not previously seen by the immune system, “and in those 3% of patients where we’ve got lots of mutations, we can now pretty quickly make them a vaccine that is mutation-specific to their tumor,” Dr. Disis reported. “But that will only work in a minority of patients.” For patients without mutations, rare epitopes that have not been seen by the immune system can be identified, antigens engineered, and epitope-based vaccines created.

Studies in mice using neoantigen vaccines have been encouraging, Dr. Disis commented. Both types of vaccines have gone into phase I clinical trials and have resulted in higher levels of immunity in patients than we have ever seen before, she said. “We may have broken the barrier in terms of vaccination. Now we are checking to see whether those T cells are capable of homing to the tumor in patients, as we saw in mice.”

Dr. Disis asked, “Is that all it is going to take? Give everyone a vaccine to try to increase those T cells, maybe combined with a checkpoint inhibitor?” She continued, “I don’t think it is going to be that easy. I am very interested in immune activation antibodies to activate T cells, but I think the answer goes back to adding chemotherapy, and what we know now about the role of chemotherapy in combination with immunotherapy.”

After 6 years of work, immunizing hundreds of mice, meta-analyses of animal studies revealed that “as with immune checkpoint inhibitors, we had a minority of animals—less than 20%—who ended up having tumor regression,” Dr. Disis reported. “But the majority of animals developed long, prolonged stabilization of disease.” Biopsies revealed plenty of T cells penetrating the tumor, “yet they weren’t doing anything. In immunology, that is called immune equilibrium…. We need an eradicative response to win that battle.”

“We know about oncogenic shock from targeted therapy, where you find dominant growth pathways and develop a small molecule to target it. You give people the small molecule, their tumors go into stasis, and they have these prolonged disease stabilizations,” Dr. Disis said. “By ‘turning off’ that dominant growth factor receptor pathway, you are putting the tumor in oncogenic shock: it doesn’t know how to grow. After a time, it will find a nondominant pathway, and it will make that a dominant pathway; but for a while, you have a window of opportunity to hit it with all you have. We are seeing that now with immune checkpoint inhibitor therapy.”

In experiments with mice in two different models, HER2-positive and triple-negative, “we gave nothing, a vaccine, a vaccine with a standard therapy, or standard therapy alone,” Dr. Disis reported. “What we found was that in one mouse model, using a Th1 vaccine targeting just one antigen, IGF1R, we had vaccine resulting in tumor stasis. We had a new monoclonal antibody not doing much better, but the combination of the two resulted in complete tumor regression.”

She added, “Vaccine alone gives prolonged stabilization, but using vaccines and chemotherapy together results in complete resolution of disease from a pathologic standpoint…. Maybe it is just a sequence or integration issue of how we bring immunotherapy to breast cancer in front-line disease—in disease that hasn’t had a chance to develop a lot of mutations or multiple driver oncogenic pathways—concurrently with chemotherapy,” Dr. Disis commented. ■

DISCLOSURE: Dr. Disis has stock and other ownership interests in EpiThany; has received research funding from EMD Serono, Celgene, Janssen, and Pfizer, as well as institutional research funding from EpiThany; and is the inventor on patents held by the University of Washington. Dr. Schmid has an immediate family member employed with Roche; has received honoraria from AstraZeneca, Pfizer, Novartis, and Roche; is a consultant/advisor with Pfizer, Novartis, Eisai, Celgene, AstraZeneca, Merck, Boehringer Ingelheim, Bayer, Puma Biotechnology, with an immediate family member acting as consultant/advisor for Genentech/Roche; and has received institutional research funding from AstraZeneca, Astellas Pharma, Medivation, OncoGenex, Genentech, Novartis, Roche, and Merck. 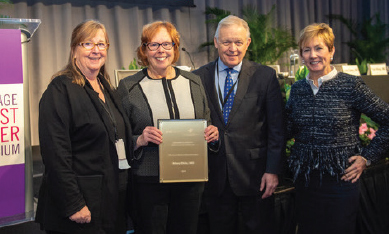 The 20th Annual Lynn Sage Breast Cancer Symposium was hosted earlier this year by the Robert H. Lurie Comprehensive Cancer Center of Northwestern University in Chicago. “A new era of cancer vaccines” and encouraging data from early trials were among the topics discussed by Mary (Nora) Disis, ...