Dr. Balducci, one of the founders of SIOG and considered by many as the father of geriatric oncology, was awarded the SIOG Lifetime Achievement Award for his contibutions to geriatric oncology. Dr. Balducci is currently Director of the Division of Geriatric Oncology at the Moffitt Cancer Center and Professor of Oncologic Sciences and Medicine and the University of South Florida in Tampa. Dr Balducci’s research focuses on cancer and aging, which he has extended to three other areas: determination of life expectancy and active life expectancy; polypharmacy in older cancer patients; and support of the caregiver. In addition, Dr. Balducci has been involved in cooperative trials involving management of breast, lung, colorectal, and prostate cancers.

Each year, SIOG awards a prominent world expert in the geriatric oncology field with the Paul Calabresi award, named for Paul Calabresi, MD (1930–2003), founding President of SIOG in 2000 and a renowned “statesman of oncology.” The 2017 award was presented to Dr. Hurria, a geriatrician and oncologist, who is Vice Provost of Clinical Faculty and Director of the Cancer and Aging Research Program at City of Hope in Duarte, California. Dr. Hurria is principal investigator on six National Institutes of Health–funded grants and has received research support from the Breast Cancer Research Foundation, UniHealth Foundation, and Hearst Foundation. Dr. Hurria leads national and international efforts to improve the care of older adults with cancer. Under Dr. Hurria’s leadership, the Cancer and Aging Research Program has developed and executed over 24 geriatric oncology protocols, enrolling over 3,200 participants on studies focused on cancer and aging. She served on the Institute of Medicine, Committee on “Improving the Quality of Cancer Care: Addressing the Challenges in an Aging Population,” and is a current member of ASCO’s Board of Directors. ■ 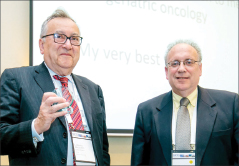 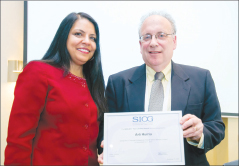