On November 8, 2017, the Chemotherapy Foundation held a benefit in New York City to raise funding to support an investigator in ovarian cancer research selected for the 2018 Research Grant Program. The event coincided with the 35th Annual Chemotherapy Foundation Symposium and honored oncology pioneer, James F. Holland, MD, FASCO, Distinguished Professor of Neoplastic Diseases at the Tisch Cancer Institute, Icahn School of Medicine at Mount Sinai, with the foundation’s Medical Science Award. The award was given in recognition of Dr. Holland’s research accomplishments, especially his early research in acute leukemia, which, along with colleagues Emil Frei, MD, FASCO, and Emil J Freireich, MD, DSc, FASCO, among others, helped transform childhood acute lymphoblastic leukemia from an incurable disease into one with an over 80% survival rate.

The Chemotherapy Foundation also honored actor and comedian Martin Short with its Humanitarian Award for his work in raising awareness of ovarian cancer, which took the life of his wife, Nancy Dolman, in 2010.

The evening opened with a screening of Walk on the Wild Side, a documentary by filmmaker Germaine McCormick-Kos, which chronicles Ms. McCormick-Kos’ diagnosis of stage IV ovarian cancer and her quest to learn more about her disease and the history of the advancements in treatment that saved her life. In addition to interviews with current leaders in oncology, Ms. McCormick-Kos also conducted interviews with Dr. Freireich, Dr. Holland, and Dr. Frei, shortly before his death in 2013.

The film was followed by comments from Ms. McCormack-Kos about her cancer experience and presentations by Franco M. Muggia, MD, Chairman and Medical Director of the Chemotherapy Foundation and Professor in the Department of Medicine at NYU Langone Health, of the Medical Science Award to Dr. Holland and the Humanitarian Award to Mr. Short. Here are some photos that captured the spirit of the evening. ■ 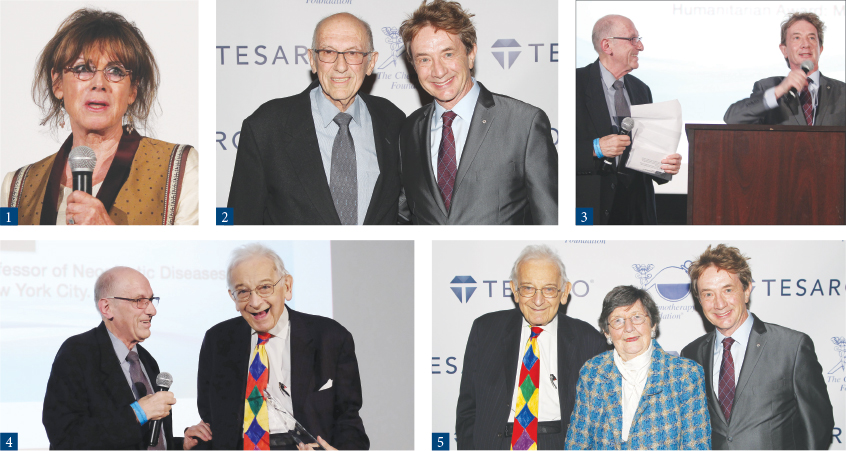 1. Filmmaker and cancer survivor Germaine McCormick-Kos discusses her diagnosis of stage IV ovarian cancer and how the experience led her to make her film, Walk on the Wild Side. 2. Left to right: Franco M.Muggia, MD, and Martin Short at the Chemotherapy Foundation Benefit reception following the screening of Walk on the Wild Side and the award presentations. 3. Left to right: Franco M. Muggia, MD, presents the ­Humanitarian Award to actor and comedian Martin Short. 4. Left to right: Franco M. Muggia, MD, Chairman and Medical Director of the Chemotherapy Foundation, presents the Medical Science Award to James F. Holland, MD, FASCO, in recognition of Dr. Holland’s decades-long career in oncology. 5. Left to right: Dr. James F. Holland celebrates the evening with his wife, Jimmie C. Holland, MD, Wayne E. Chapman Chair in Psychiatric Oncology at Memorial Sloan Kettering Cancer Center, and Martin Short.