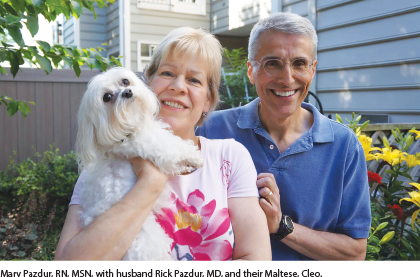 The many patients and families she served during her distinguished career benefited tremendously from her clinical acumen. She also had an exceptional ability to engage patients, and to skillfully incorporate their preferences and values into the plan of care.

Oncology nurse practitioner Mary Pazdur, RN, MSN, spent her professional life bettering the clinical care and outcomes of cancer patients, culminating in her career at the National Cancer Institute (NCI), in the Laboratory of Tumor Immunology and Biology, working with patients on cancer vaccine protocols. Ms. Pazdur died on November 24, 2015. The cause of death was ovarian cancer.

Ms. Pazdur’s life and work in the oncology community had a distinctive history—for 33 years she was married to Richard Pazdur, MD, Director of the Office of Hematology and Oncology Products at the U.S. Food and Drug Administration (FDA). And for more than 3 decades, Ms. Pazdur was intimately involved in some of the most exciting clinical and political advances in oncology.

Bonding in Oncology: A Partnership Flourishes

Lung cancer expert Philip D. Bonomi, MD, introduced Ms. Pazdur to her future husband in 1979, when they were both working in the oncology department at Rush-Presbyterian St. Luke’s Medical Center in Chicago. “I had the privilege of working with Mary Pazdur early in her career and the honor of introducing her to Rick. Right from the beginning, we could see that they made a great team. Rick had a penchant for coming up with humorous nicknames, and Mary would sometimes offer her gentle perspective on these new monikers. Mary was also a role model for her nursing colleagues, and she was a great physician partner. I’m sure that she also served as a great sounding board for Rick in his very demanding job. Along with these fond memories, we will remember Mary for her dedication to patients, common sense, and kindness,” Dr. Bonomi told The ASCO Post.

Dr. Pazdur recounted his initial encounter with the oncology nurse who would become his wife. “I always joke that our first date was over a bottle of Adriamycin in the exam room, which sounds somewhat peculiar, but that was the truth,” said Dr. Pazdur.

According to Dr. Pazdur, it was the common experience of oncology that helped forge their bond. “I look back to all of those early patients who were treated by Mary, myself, and the people at Rush-Presbyterian St. Luke’s Medical Center, and it really was a special time in our lives.”

In 1982, Dr. Pazdur accepted a position at Wayne State University School of Medicine in Detroit. “It was the same year Mary and I were married. Because time and money were tight, we spent our honeymoon in Detroit planning our move from Chicago,” said Dr. Pazdur.

After 6 years at Wayne State, Dr. Pazdur was recruited for a position in gastrointestinal oncology at The University of Texas MD Anderson Cancer Center and moved with his wife to Houston. At MD Anderson, Ms. Pazdur’s own career path accelerated. In 1988, she was appointed Clinical Instructor. In 1989, she was named nurse manager of discharge planning, and in 1993, clinical nurse specialist.

Ms. Pazdur’s colleagues at MD Anderson recalled her special humanistic and clinical traits that were emblematic of her career. Colleague Ellen V. Sigal, PhD, Chairperson and Founder of Friends of Cancer Research, described Ms. Pazdur’s passing as “a profound loss of an extraordinary woman who devoted her life to helping others. She will be deeply missed.”

Waun Ki Hong, MD, Head of MD Anderson’s Division of Cancer Medicine, noted that he had the tremendous privilege and honor to work with Ms. Pazdur side by side. “I must say that she was one of the best advanced nurse practitioners I have ever worked with in my almost 40 years in oncology practice. She was a totally dedicated nurse who always worked for the best interest of her patients. She was extremely compassionate, and her communication skills between physician and patient were absolutely outstanding—I can’t think of anyone with better communication skills. She will be sorely missed, not only by physicians but by patients as well,” said Dr. Hong in an interview with The ASCO Post.

Simply a Superb Person and Practitioner

Roy S. Herbst, MD, PhD, Chief of Medical Oncology at Yale Cancer Center, who cut his oncology teeth with Ms. Pazdur remembers her with fond respect. “I’ve known Mary since 1997, when I was a young attending at MD Anderson. She was a nurse practitioner managing Dr. Waun Ki Hong’s practice. At that time, I was working very closely with Fadlo Khuri, MD; we were the junior attendings who would help Mary with Dr. Hong’s patients, but when Ki wasn’t around, Mary helped us. We loved when Mary was there at the clinic because it meant our patients would get superb care.”

He continued, “We once treated some patients from another country, which posed language barriers that made the collection of their clinical information difficult. But Mary would always pull things together and, in the end, no matter who the patients were or where they came from, Mary made sure they received the best care possible. She was the dean of oncology nurse practitioners, and she helped move the field forward to what it is today. When Rick left MD Anderson for the FDA, we were sad to see him go, but we were even sadder to see Mary go. She was simply a superb person and practitioner.”

Lessons About Living and Dying

At a recent National Coalition for Cancer Survivorship meeting, in which her husband was honored for his contributions to cancer patients and their families, Ms. Pazdur reflected on her own career. “I’ve always worked in oncology, even when I was an undergraduate nursing student. I was drawn to oncology because it’s so many different diseases affecting so many body systems and developmentally along the continuum of life. The silver lining is that you learn a lot of existential lessons about living and dying when you’re almost too young to learn those things.”

During that same interview, Dr. Pazdur spoke of his wife. “I’ve enjoyed the partnership that I’ve had with Mary during those years. As many of you know, my life had been transformed over the past 3 years with my wife having ovarian cancer, and this gives me a special perspective on the treatment of patients with cancer.”

Ms. Pazdur has said that her career as a health-care provider in exam rooms with vulnerable cancer patients actually helped her prepare for her own struggle against cancer. “I’ve had the luxury of some rehearsal, and very few people have that opportunity in their lifetime. I’ve learned a newfound respect for the caregiver’s role, since he [Dr. Pazdur] has had to become a caregiver in addition to the other hats that he wears.”

A Pioneering Leader of the Oncology Nurse Practitioner

On Ms. Pazdur’s passing, colleagues across the country paid tribute to her as a special person among many special people. Following MD Anderson, in 2000, she joined NCI as an advanced practice nurse.

One of her many associates at the NCI, Sandra A. Mitchell, PhD, CRNP, FAAN, Research Scientist, Outcomes Research Branch, remarked, “Mary was a pioneering leader of the oncology nurse practitioner role at cancer centers around the country and at the NCI. Through her expertise, compassion, and continuous striving for optimal patient outcomes, Mary transformed the interprofessional team at NCI, establishing the nurse practitioner role as an essential component in the delivery of patient-centered care. The many patients and families she served during her distinguished career benefited tremendously from her clinical acumen. She also had an exceptional ability to engage patients and to skillfully incorporate their preferences and values into the plan of care.”

Ms. Pazdur’s research activities have also included a study of the needs of orthopedic oncology patients at home, funded by the National Association of Orthopedic Nurses, and she has lectured on that and other topics at the Oncology Nursing Society’s Annual Fall Institute and Annual Congress.

“Those of us privileged to know Mary as a friend and colleague could always count on her warm and caring spirit, her generosity, and her always-wise perspectives. She is greatly missed, but her legacy of professional excellence blended with deep compassion remains an enduring inspiration for us all,” added Dr. Mitchell.

Mary Pazdur represented the truest spirit and dedication of an oncology specialist. She will be dearly missed by her family and many friends. ■