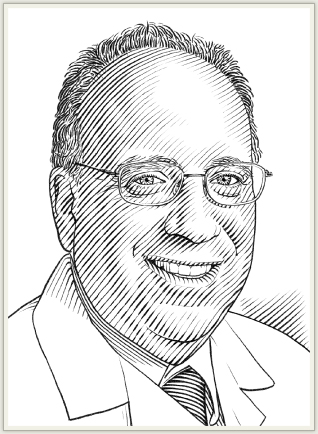 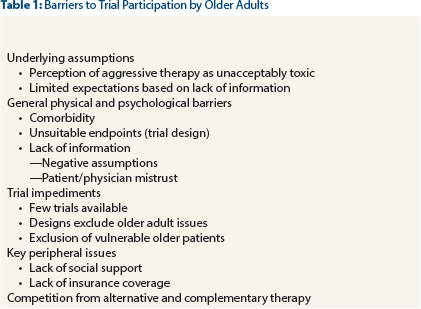 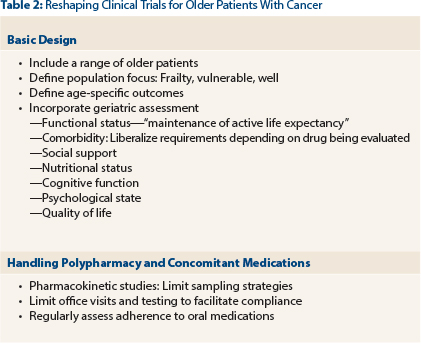 To meet the needs of these vulnerable cancer patients, these clinical design considerations should be incorporated in studies as soon as possible. Reluctance to alter our standard designs must be overcome, or the progress that is urgently needed will never occur.

Geriatrics for the Oncologist is guest edited by Stuart Lichtman, MD, FACP, FASCO, and developed in collaboration with the International Society of Geriatric Oncology (SIOG). Visit SIOG.org for more on geriatric oncology.

Increasing age is directly associated with an increasing risk of cancer, and persons over age 65 constitute the fastest-growing group in the United States. Not only do older adults comprise the majority of cancer patients, at the same time, they have also been vastly underrepresented in clinical trials. As a result, little evidence-based data exist to guide their course of treatment.

Alternative trial designs and expanded research evaluations are needed to guide cancer therapy in this population, which is estimated to account for 20% of all Americans by the year 2030. There have been proposals to correct the widespread underreporting and underrepresentation of older adults in cancer trials and to reduce the existing barriers to trial enrollment. There are also specific issues of treatment and survivorship as they pertain to older adults, including function, clinical benefit, quality of life, polypharmacy, toxicity, and comorbidity.

Older cancer patients have traditionally not been the subject of clinical drug development. However, they are the largest consumers of chemotherapy, and their numbers are rising dramatically. Worldwide, 1 of every 10 persons is 60 years old or over. By 2050, one of every five persons will be 60 or older, and by 2150, this ratio will decrease to one of every three persons. By 2050, the actual number of people over the age of 60 will be almost 2 billion, at which point the population of older persons will outnumber children up to 14 years old.

Increasing age is directly associated with increasing rates of cancer, corresponding to an 11-fold greater incidence in persons over the age of 65 years compared with those under age 65. Consequently, the older population comprises a majority of cancer patients.

Despite the increasing incidence of cancer associated with aging and the aging of the U.S. population, only a relatively small number of older patients have been included in clinical trials. As a result, there is a lack of high-quality data on which to base meaningful decisions. Older adults have been underserved in the area of drug development, and they often go untreated, even when data exist for efficacious therapy.1 The needs of the older cancer patient are simply not being met.

A number of barriers limit the participation of older patients in clinical trials (Table 1). For various reasons, clinicians often do not offer a clinical trial to eligible older patients. Cognitive dysfunction also interferes with patient understanding of complicated informed consent documents; such impairments affect as many as 36% of adults aged 85 and older, thus ruling out trial enrollment.

In addition, a number of clinical trial design issues need to be addressed. Specific issues that are particularly pertinent to older patients include function, comorbidity, and social supports. Clinical investigators and biostatisticians must develop novel trials to optimize the data derived from these studies (Table 2). Suggestions have been proposed to “geriatricize” the standard oncology drug design.2 For instance, we have to meld the standard oncology outcomes of disease-specific and overall survival with geriatric outcomes of evaluating function, cognition, toxicity, nutrition, and dependence (ie, quality vs quantity of life).

ASCO has published a position paper on the specific needs to enhance the evidence base to improve cancer care of older patients.3 To meet the needs of these vulnerable cancer patients, which will be the majority, these clinical design considerations should be incorporated in studies as soon as possible. Reluctance to alter our standard designs must be overcome, or the progress that is urgently needed will never occur.4-6 ■