Optimizing HER2 Therapy in Early and Advanced Breast Cancers 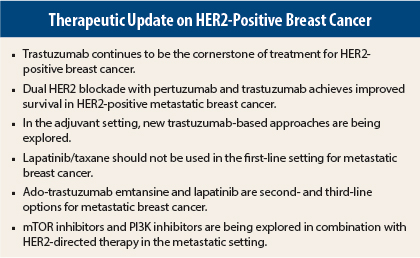 Trastuzumab has aged extremely well. But we are not sure that 12 months is a magic number [for duration of therapy].

The introduction of trastuzumab is one of the most important breakthroughs in the treatment of breast cancer with its improvement in overall survival. This survival bar has now been raised to over 15 months with the combination of pertuzumab plus trastuzumab.

Trastuzumab (Herceptin) has been the cornerstone of therapy for HER2-positive tumors, which comprise about 20% of all breast tumors. Additional therapies targeted to other HER2 pathways or other targets to be used in combination with trastuzumab are being explored in both the adjuvant and metastatic settings. At the 2014 Chemotherapy Foundation Symposium, experts reviewed new approaches to HER2-positive breast cancer in these settings.

“This represents great progress, and now there are studies of trastuzumab/pertuzumab in the adjuvant setting,” he said. They included the phase II NEOSPHERE trial, which showed a doubling of pathologic complete response rate with the combination of pertuzumab/trastuzumab plus docetaxel compared with trastuzumab/docetaxel (39.3% vs 21.5%).3

Neoadjuvant trastuzumab/lapatinib has been studied in four trials, and all of them have shown an advantage for the combination, he continued. However, in the large ALTTO trial, the combination failed to improve disease-free survival in the adjuvant setting, which was disappointing, he added.5

Another approach—sequential therapy with 1 year of trastuzumab followed by 1 year of neratinib—appears to be effective in the extended adjuvant setting, according to preliminary data from the ExteNET study showing improved disease-free survival.6 “We look forward to hearing more about this sequential therapy,” Dr. Baselga said.

Moving on, he noted, “There is tremendous excitement about [ado-trastuzumab emtansine] in the adjuvant setting.”

The phase III KATHERINE study is comparing 14 cycles of adjuvant ado-trastuzumab emtansine vs 14 cycles of trastuzumab, and 50% of planned enrollment is completed. The primary endpoint is disease-free survival.7

“The introduction of trastuzumab is one of the most important breakthroughs in the treatment of breast cancer with its improvement in overall survival. This survival bar has now been raised to over 15 months with the combination of pertuzumab plus trastuzu­mab,”  she said.

“One important study showed us what not to do for first-line metastatic breast cancer,” she continued. The MA-31 trial compared lapatinib/taxane followed by lapatinib vs trastuzumab/taxane followed by trastuzumab in 600 patients and found a progression-free survival detriment for lapatinib/taxane at the interim analysis.10 Moreover, the combination was associated with increased febrile neutropenia and grade 3 or higher diarrhea.

“We need to remember these data [ie, negative findings for lapatinib/taxane] in clinical decision-making when lining up our therapeutic options for women facing this disease,” she emphasized.

Another very important study, CLEOPATRA,2 showed the power of adding a second antibody to trastuzu­mab as first-line treatment in the metastatic setting [see above]. Final results showed improved progression-free and overall survival with pertuzumab/­trastuzumab.

“CLEOPATRA showed that it is important to first give six cycles of docetaxel [with antibody],” she said. “Getting the chemotherapy out of the way allows the targeted agents to work in this scenario without the chemotherapy toxicity.”

Once patients progress on this regimen, therapeutic options include ado-trastuzumab emtansine and lapatinib.

“This survival benefit is similar to what we saw initially with trastuzumab. This study, plus CLEOPATRA, show how far we have come,” she stated.

A phase III study provided additional support for dual HER2 blockade, this time with lapatinib/trastuzumab vs lapatinib alone, showing that patients with HER2-driven metastatic breast cancer derived a survival benefit from HER2 combination therapy.13 The median overall survival was 51 weeks for the combination vs 39 months for lapatinib alone.

“Choice of third-line therapy should be based on patient characteristics and toxicity,” Dr. Blackwell said.

“Several ongoing trials will tell us about new options once trastuzumab, pertuzumab, [ado-trastuzumab emtansine], and lapatinib have been optimally utilized. Promising approaches include mTOR inhibitors [everolimus (Afinitor), the MARIANNE, BOLERO 1, and BOLERO 3 trials], and PI3 kinase inhibitors,” she said. ■

4. U.S. National Institutes of Health: A study of pertuzumab in addition to chemotherapy and Herceptin (trastuzumab) as adjuvant therapy in patients with HER2-positive primary breast cancer. Available at ClinicalTrials.gov/show/NCT01358877. Accessed November 17, 2014.

7. U.S. National Institutes of Health: A study of trastuzumab emtansine versus trastuzumab as adjuvant therapy in patients with HER2-positive breast cancer who have residual tumor in the breast or axillary lymph nodes following preoperative therapy (KATHERINE). Available at ClinicalTrials.gov/show/NCT01772472. Accessed November 17, 2014.