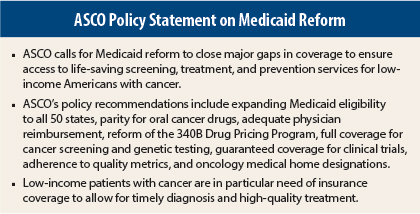 ASCO strongly believes the Society should, first, draw attention to the critical issues facing cancer patients under Medicaid and, second, make recommendations for strengthening this program to assure that our most vulnerable citizens receive needed health care.

ASCO issued its new Policy Statement on Medicaid Reform on November 17, which calls for major changes to the program to ensure access to high-quality cancer care for all low-income individuals. The Society’s recommendations call for Medicaid expansion in all 50 states to close coverage gaps, improve cancer screening and prevention services, and end coverage restrictions that prevent Medicaid enrollees from receiving high-quality cancer care, among others. The Policy Statement on Medicaid Reform is published in the Journal of Clinical Oncology.1

“People with cancer, for whom the costs of evaluation and treatment can be extraordinarily high, are particularly in need of insurance coverage to allow for timely diagnosis and high-quality treatment,” wrote statement authors Blase N. Polite, MD, MPP, of the University of Chicago, and colleagues. Currently, 67.9 million Americans are enrolled in Medicaid. Of them, an estimated 2.1 million beneficiaries, including those added under the Affordable Care Act, have had a cancer diagnosis, and many more depend on Medicaid for routine cancer screenings and prevention services. Twenty-seven states and the District of Columbia have already expanded their Medicaid programs under the Affordable Care Act, 21 have not, and the remaining 2 states are in “open debate.”

In releasing its policy statement, ASCO noted that the November midterm elections are unlikely to significantly change the outlook for state expansion under the Affordable Care Act. But other opportunities exist for improving access to cancer-related care among Medicaid beneficiaries, and unexpanded states, according to the ASCO policy statement, “should come up with an alternative strategy that provides comprehensive subsidized health coverage that ensures, among other benefits, access to high-quality cancer care, measured by cancer-specific quality metrics, delivered by a cancer specialist.”

“The evidence shows that uninsured patients are significantly more likely to be diagnosed with advanced cancer than are insured patients. Further, Medicaid’s low reimbursement rates are a disincentive for physician participation, making it increasingly difficult for patients to access care from specialists,” said Dr. Yu. “As oncologists, we believe it is our responsibility to advocate for policies that expand and improve the care of all people with cancer regardless of financial means. We also believe that no individual diagnosed with cancer should be without insurance that guarantees access to high-quality cancer care delivered by a cancer specialist. Therefore, patients with cancer who have Medicaid should receive the same timely and high-quality cancer care as patients with private insurance. Lastly, Medicaid payments should be sufficient to ensure that Medicaid patients have access to quality cancer care.

“For these and other reasons, ASCO strongly believes that the Society should, first, draw attention to the critical issues facing cancer patients under Medicaid and, second, make concrete, constructive recommendations for strengthening this program to assure that our most vulnerable citizens receive needed health care. The ASCO Policy Statement on Medicaid Reform is designed to achieve both of those objectives,” said Dr. Yu.

The recommendations ASCO presented in its policy statement offer several ways Medicaid could be reformed to expand access to cancer care and remove barriers to key elements of quality cancer care for enrollees. They include: