The ASCO Post’s Integrative Oncology series is intended to facilitate the availability of evidence-based information on integrative and complementary therapies sometimes used by patients with cancer. In this installment, Ting Bao, MD, DABMA, MS, and Jyothirmai Gubili, MS, focus on the herb dong quai, as it is widely used in traditional Chinese medicine for managing menstrual disorders, menopausal symptoms, and anemia.

A perennial herb, dong quai is prevalent in China, Japan, and Korea. Its root has been used for centuries as a spice, tonic, and medicine. Dong quai continues to be valued in traditional Chinese medicine to treat menstrual disorders, menopausal symptoms, and anemia as well as to improve blood circulation.

The dried root is boiled or soaked in wine for consumption, whereas the powdered root is available in supplemental forms of tablets, capsules, and tinctures. 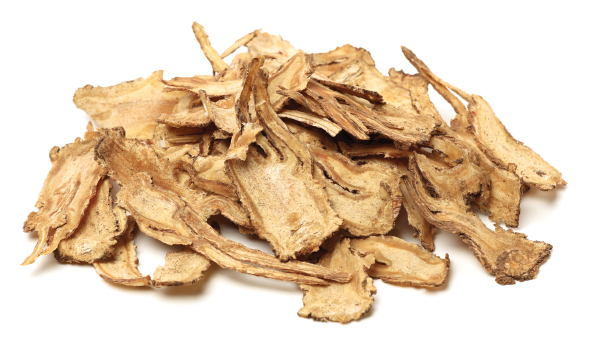 A subgroup data analysis from a randomized trial of 426 patients with acute coronary syndrome and renal insufficiency showed benefits of dong quai (given in addition to standard therapy) in improving clinical outcomes. At 1-year follow-up, there were 16 cases of the primary endpoint, which included the composite of cardiac death, nonfatal recurrent myocardial infarction, and ischemia-driven revascularization in the group given standard therapy, whereas the group given standard therapy plus dong quai had 10 fewer cases (absolute risk reduction = 0.046, 95% confidence interval [CI] = 0.004–0.088; relative risk = 0.38, 95% CI = 0.15–0.96, P = .040).10

A large population-based study of 31,938 breast cancer survivors treated with tamoxifen found consumption of dong quai to be inversely associated with the risk of endometrial cancer. The hazard ratio for development of endometrial cancer was decreased in participants who took dong quai compared with those who did not use this herb (hazard ratio [HR] = 0.61, 95% CI = 0.44–0.84).11 This study did not report the correlation between dong quai usage and the incidence of breast cancer recurrence.

Investigations of the effectiveness of dong quai in improving vasomotor symptoms, however, have yielded mixed data. In a randomized trial of 100 women with acute menopausal symptoms, an oral formula containing dong quai was found to be superior to placebo against mild hot flushes alone, from 18.9 ± 23.5 at baseline to 8.6 ± 17.1 at 6 months in the treatment group (P < .01) and from 26.0 ± 43.5 to 12.4 ± 17.6 in the placebo group (P = .062). The authors did not find any significant difference between the two groups in the overall treatment of vasomotor symptoms.12

However, another randomized study involving 50 premenopausal and postmenopausal women reported beneficial effects with an oral dong quai formula (given twice daily for 3 months). At the end of the study period, there was a 73% reduction in hot flushes and a 69% decrease in night sweats as well as improvements in sleep quality in the treatment group. Furthermore, there was a total cessation of hot flushes in 47% of participants in the treatment group vs 19% in the placebo group.13

Dong quai was also assessed for its potential benefits against vasomotor symptoms in men. In a small study, 17 patients with prostate cancer on androgen-deprivation therapy were randomly assigned to receive 500 mg of dong quai or placebo for 3 months. At the end of the study period, the authors did not find any significant differences in the severity, frequency, or duration of hot flashes between the two groups.14

Mechanistic studies indicate that dong quai has estrogen-agonist effects and may stimulate the proliferation of both estrogen receptor–positive and –negative breast cancer cells.15 Dong quai was also shown to protect against radiation-induced pneumonitis by downregulating proinflammatory cytokines such as tumor necrosis factor alpha and transforming growth factor beta 1.9 Its antitumor effects are thought to be due to inhibitory effects on invasion and metastasis of carcinoma cells16 and via suppression of tumor growth,17 mediated by Nur77-dependent apoptosis.18 However, dong quai extracts were also found to promote angiogenesis by inducing the proliferation and migration of endothelial cells through upregulating expression of vascular endothelial growth factor.19 Clinical implications of this finding have yet to be determined.

Dong quai may cause bloating, loss of appetite,20 diarrhea, and photosensitivity.21

Cases of gynecomastia,22 hypertension,23 and subarachnoid hemorrhage24 have been reported following the use of dong quai or products containing dong quai.

Cytochrome P450 Substrates: Long-term use of dong quai may induce CYP3A4 by activating pregnane X receptor.25 This may decrease the blood levels and, thereby, the effectiveness of substrate drugs.

Lisinopril: Simultaneous use of this angiotensin-converting enzyme inhibitor with dong quai was found to exacerbate anemia in a murine model.26

Dual Antiplatelet Therapy With Aspirin and Clopidogrel: Coadministration of aspirin and clopidogrel with dong quai was observed to alter the pharmacokinetics of dual antiplatelet therapy with increased systemic exposure in a murine model.27

Of note, the clinical relevance of the above interactions has yet to be determined:

Anticoagulants: Dong quai may have additive anticoagulant effects,28 although such effects appear to be limited in a study of healthy adults.29

Dong quai is a popular herbal supplement used in Asia to reduce postmenopausal symptoms and to enhance energy and blood circulation. However, its estrogenic activities, potential to interact with medications via cytochrome P450 enzymes, and limited clinical evidence of its utility against menopausal symptoms dampen the enthusiasm to recommend dong quai to cancer survivors at this point. Additional well-designed clinical trials are needed to determine its effects in improving the quality of life of cancer survivors.

Dietary supplement use by cancer patients has increased significantly over the past three decades despite insufficient evidence of safety and effectiveness. Yet, finding reliable sources of information about dietary supplements continues to be daunting. Patients typically rely on family, friends, and the Internet, often receiving misleading information.

The Integrative Medicine Service at Memorial Sloan Kettering developed and maintains a free website “About Herbs” (www.mskcc.org/aboutherbs) that provides reliable and evidence-based information about herbs, vitamins, minerals and other dietary supplements, as well as unproven anticancer treatments. Each of the 290 and growing number of entries has healthcare professional and patient versions that are regularly updated with the latest research findings.

The free About Herbs app is now available on both ANDROID and iOS devices! Download at Google Play for Android devices and App Store for iOS.

21. DerMarderosian A: The Review of Natural Products. St. Louis: Facts and Comparisons; 1999.