In this installment of the Living a Full Life series, guest editor Jame Abraham, MD, spoke with Pamela Kunz, MD, Director, Center for Gastrointestinal Cancers at Smilow Cancer Hospital and Yale Cancer Center. Dr. Kunz is an international leader in the clinical care of patients with neuroendocrine tumors and in research that is advancing the field through clinical trials and translational science, defining the next generation of therapies for patients with this rare diagnosis.

On her father’s career: “He was a scientist who studied bats, and, as a kid, I thought it was the strangest thing anyone could ever do. But my brother and I helped him in his field research, which accelerated my interest in science.”

Advice for junior faculty or fellows: “No single mentor can serve every role for you. Create a network of mentors, which creates more opportunities and support as you build a career.”

On joining Yale School of Medicine: “I decided it was time to find a place that offered me an opportunity to advance my career and to help move gender biases into mainstream conversation. I found that opportunity at Yale.”

Dr. Kunz was born and reared in Wellesley, a town in northeastern Massachusetts and home to several colleges. Her parents were originally from working class families in Missouri; her mother grew up on a farm, and her father was the son of a utility worker. After relocating to Boston, her father pursued a career in academics, becoming Professor of Biology at Boston University; her mother became a real-estate broker.

Path to a Career in Medicine

“My early interest in science was inspired by my father’s career. He was a scientist who studied bats, and, as a kid, I thought it was the strangest thing anyone could ever do. But when my brother and I went with him to explore barns and caves in New England, I became fascinated with his work. We even helped him in his field research, which accelerated my interest in science,” she said.

Dr. Kunz continued: “I felt as a kid that both my parents believed I could do anything. I think that was truly helpful. Again, as someone who liked science and was considering medicine, there was never a ‘you can’t do that’ element in our discussions. So, they were very encouraging of me in my interests, which is an important component in developing the kind of self-assurance you need to go into a competitive field.” 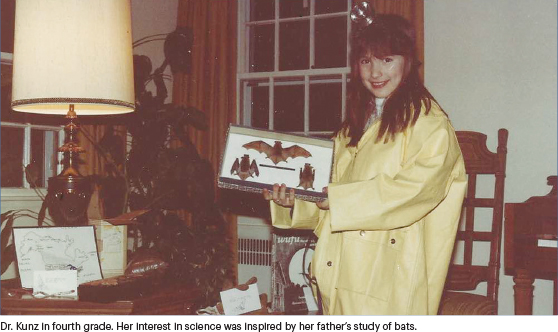 In 1990, Dr. Kunz entered Dartmouth College, in a sense, to follow in her father’s scientific footsteps, and majored in biology/ecology. “Some of my best mentors were my undergrad biology professors, who encouraged me to enter Dartmouth’s foreign study programs. I did a foreign study program in Jamaica and Costa Rica, where I studied tropical biology. I learned early on how to ask good questions and about research design from that experience,” she related.

Dr. Kunz noted that her experiences in foreign countries helped broaden her world view, outside of “the bubble of Wellesley.” However, after attaining her BA from Dartmouth College, Dr. Kunz was undecided about her career path.

“My dad would tease and say, ‘real doctors have PhDs.’ So, I was trying to figure out, was I going to get a PhD or an MD, or both? In the end, I took 3 years off before going to medical school to figure out what I wanted to do. I worked at Massachusetts General Hospital for 2 years in Dr. Vivian Shih’s lab studying metabolic disorders in children. I shadowed her in the clinic, seeing children with inherited disorders of metabolism. I loved the idea of being a clinician and a scientist and think that was what really clinched it for me,” continued Dr. Kunz.

Asked about her road to oncology, Dr. Kunz replied: “I applied to medical school broadly, and, as fate would have it, I ended up back at Dartmouth, which is a pretty small medical school (about 80 students per class). Also, I met my future husband there, who was from California, so that’s why I ended up there. We couple-matched at Stanford University for residency. I had a lot of different interests. I considered obstetrics/gynecology and internal medicine/pediatrics. Ultimately, my interest in oncology started in medical school. I really enjoyed the intensity of the physician-patient relationship. That was one thing that really drew me to the field. The science at the time was starting to evolve, so it was an exciting time to enter the field.”

During her fellowship, Dr. Kunz concentrated on solid tumors, doing 1 year in the clinic and 2 years in research. “It was during that formative experience that I decided to stay in gastrointestinal oncology, a decision based on some of the mentors and opportunities. Another reason was that it offered me the opportunity to research and treat a range of diseases in male and female patients,” she said.

Asked about her choice to go into neuroendocrine tumor research and treatment, Dr. Kunz responded: “As I was finishing my fellowship in 2008, a time when there were almost no U.S. Food and Drug Administration–approved drugs for neuroendocrine tumors, one of my mentors asked me to write a review paper on them, which is how a lot of fellows become exposed to a specific aspect in the field. During that period, I started getting involved with the North American Neuroendocrine Tumor Society. It was a good choice, and I’ve had a rewarding career thus far.”

Dr. Kunz stressed the value of being involved in professional societies. “I was fortunate to become involved with the National Clinical Trials Network Group and had really great mentorship from Drs. Al Benson and Peter O’Dwyer, who gave me an opportunity to lead a clinical trial. Although having terrific mentors really helped my career, I also learned some hard lessons. I had some mentors who let me down and learned that no single mentor can serve every role for you. So, as junior faculty or fellows are reading this, I think a key take-home message is to create a network of mentors, which creates more opportunities and support as you build a career.”

Earlier in her career, Dr. Kunz faced several unpleasant gender-based biases, which also helped her shape a voice of resistance. “I was 10 years out of my fellowship and wanted to assume a leadership role, something I’d worked very hard toward. But instead of support from some of my male peers, I started experiencing some microaggressions and gender harassment. I felt very alone and unsupported. It became increasingly difficult to talk about. What I am happy to see now is that more and more people are talking about this issue, which runs through many institutions in academia. ASCO is playing a huge role in trying to be part of the solution and help promote change. I think that’s very exciting,” said Dr. Kunz. “So, after battling [issues related to gender discrimination] and getting nowhere, I decided it was time to find a place that offered me an opportunity to advance my career and to help move gender biases into mainstream conversation. I found that opportunity at Yale,” she added.

Dr. Kunz is currently Director of the Center for Gastrointestinal Cancer at Yale. “I was also newly appointed as Vice Chief for Diversity, Equity, and Inclusion at Yale, which gives me the chance to use my personal experiences of gender discrimination, which forced me to make a career move during a formative part of my life. However, I embrace that difficult period, as it helped me gain a voice to try to create cultural change on a national level,” she explained.

Dr. Kunz continued: “ASCO also gave me the opportunity to lead a panel on Dismantling Gender Disparities. We had a great group this year, and I’ve become much more comfortable discussing gender inequality on the public stage. Inherently, what we do in oncology has incredible meaning, but this is another way for me to have an impact on the community at large, which matters a great deal to me. I want to help create a better, more equitable and diverse environment for young women coming into the field.”

The COVID-19 pandemic registered on a very personal level for Dr. Kunz. Her father, who was hit by a car and left with permanent traumatic brain injury 10 years ago while attending a scientific conference in Canada, died in a nursing facility in 2020 during the early stages of the pandemic. 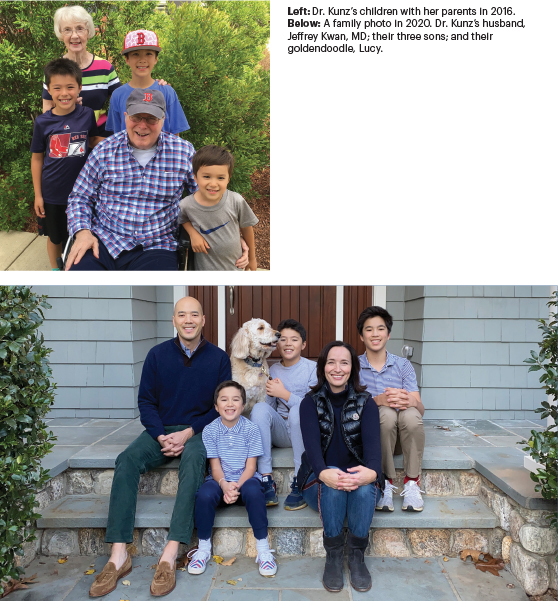 “We all now know that many nursing facilities were hard hit by COVID, as was my father’s, in which half the people on his floor died. It was a very hard time for us, especially since we couldn’t be with him when he died. On top of that, we had to have a Zoom funeral. Anyway, my story is one of many from the COVID pandemic,” commented Dr. Kunz. “We have learned a lot in the public and professional arenas from this tough period, so hopefully it has better prepared us for anything else that comes our way.”

How does a super-busy oncology leader decompress from the challenges of a demanding career? “I would say my family is super important to me and is a major way to balance work and private life. I have three boys, aged 16, 13, and 10, and a dog. The dog is a girl, so I guess that’s the only way I could have a girl. We spend a lot of time on sports fields. My older two are baseball players and watching them play is one of my favorite things to do. My youngest is more creative and artistic, and I love supporting that interest for him. When I have time, I love to bake and would say, if I were not a physician, I’d be a pastry chef. I don’t know if that would be any easier, but I’d enjoy it.”