In recent years, the gut microbiome has garnered considerable attention as a scientific field, with far-reaching potential for clinical good. The trillions of microorganisms that inhabit the digestive tract form an incredibly complex community, which participates in countless interactions with its host and within its own members. Researchers have uncovered many ties between the gut microbiome and human health, although aspects of the mechanistic details remain baffling.

In oncology settings, studies over the past decade have shown evidence of the gut microbiome’s relevance to several types of cancer and their treatment. For example, the gut microbiome likely plays an important role in colon carcinogenesis through a variety of abnormal microbial community states. Bacteria such as enterotoxigenic Bacteroides fragilis1,2 and Fusobacterium nucleatum3,4 have been shown to induce a proinflammatory state in the colon, which is thought to enhance oncogenic potential.

Link to the Immune System

The gut microbiome has also been found to be an important factor during cancer treatment. In the setting of myelosuppressive chemotherapy and broad-spectrum antibiotics, the gut microbiome undergoes dramatic shifts in composition.5 These microbial perturbations are specifically and directly correlated with risk for bloodstream infections caused by opportunistic bacteria and fungi, which normally would exist as minorities within the gut microbiome.6,7 An understanding of how these shifts occur may allow us to reduce the infectious complications of chemotherapy.

There is now little doubt that the gut microbiome is closely entwined with the immune system. As evidenced by many studies, the composition of the gut microbiome is predictive of a variety of immune-related complications in highly immunosuppressed patients with cancer. Also, in allogeneic bone marrow transplantation, studies in mice and humans have shown that gut microbiome diversity is associated with transplant-related mortality.8,9 In addition, anaerobic groups of bacteria are associated with protection against graft-vs-host disease10-12 as well as susceptibility to viral infections.13

In cancer immunotherapy, a series of landmark studies demonstrated that the gut microbiota is an important factor in the efficacy of checkpoint inhibitor therapy against solid cancers. In three separate studies, tumor-bearing mice responded more favorably to immunotherapy when colonized with feces from patients with cancer who had responded to treatment, compared with feces from nonresponders.14-16 These findings provide strong evidence that the gut microbiome can be practically channeled to improve antitumor immune responses. 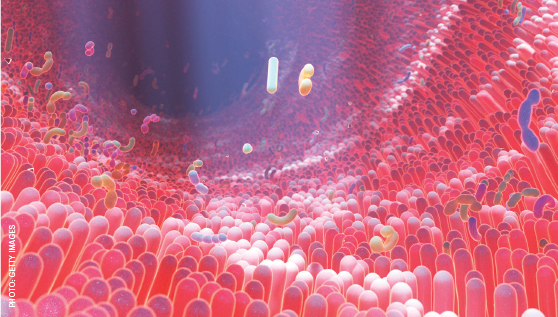 Although considerable progress has been made in unraveling some of the mutually beneficial interactions of the gut microbiome, our mechanistic understanding of precisely how it operates and benefits the host is still limited. The vast microbial communities are deeply complex and challenging to analyze, and researchers are still unclear about what exactly constitutes a “good” gut microbiome.

As an illustration of these challenges, the three landmark immunotherapy studies previously mentioned involved similar colonization experiments; they generated a resounding consensus that the gut microbiota can be used to bolster immune responses during checkpoint inhibitor therapy. However, researchers could not agree on which exact members of the gut microbiome were responsible for those responses. One group concluded that Faecalibacterium prausnitzii and other members of the Ruminococcaceae family were responsible14; the second group reported that Akkermansia muciniphila was the beneficial agent15; and the third group concluded that several species including Bifidobacteria confer the greatest benefit.16 Though these disparate results are not necessarily mutually exclusive, they nonetheless point to the difficult task of analyzing and comprehending the underpinnings of these deeply complex communities.

Perhaps the best-known example of successful microbiome intervention is the use of fecal microbiota transplantation for recurrent Clostridium difficile infection. Its effectiveness has been well established,17 and it is currently a recommended treatment in guidelines from the Infectious Diseases Society of America and the Society for Healthcare Epidemiology of America.18 The success of fecal microbiota transplantation helped to provide reassurance that the gut microbiome can be effectively harnessed for therapeutic good. This therapy is currently being investigated for its potential benefits against other disorders.

In contrast to fecal microbiota transplantation, oral probiotics have been far less successful in providing benefit against C difficile infection. In general, probiotics have been touted as one simple strategy toward promoting gut microbiota health. Although they hold some degree of promise in studies and are conceptually attractive, commercial probiotics in their current forms have fallen short of providing the full range and magnitude of benefits suggested by microbiome studies.19 Is it possible to improve on the concept of a formulated product aimed at restoration of gut microbial health? Researchers are attempting to develop more rationally designed treatments involving defined bacterial consortia (ClinicalTrials.gov identifiers NCT03183128 and NCT04208958). If successful, bacteriotherapy with these formulations could be effective in treating a range of disorders.

Guest Editor’s Note: Growing evidence suggests that the gut microbiome, a diverse and complex mix of microorganisms and their metabolites, is critical to human health. Disruptions in normal microbiome-host interactions may predispose the host to disease. In this article, Ying Taur, MD, MPH, of Memorial Sloan Kettering Cancer Center, New York, describes the importance of the microbiome in oncology settings and discusses the challenges surrounding microbiome research.

There is also a growing interest in dietary approaches to boost the gut microbiome. For example, resistant starches are fermentable fibers that are indigestible and degraded by gut bacteria such as Ruminococcus bromii.20 This leads to further conversion by other members such as F prausnitzii and Eubacterium rectale; these bacteria generate butyrate and other short-chain fatty acids, which have been shown to promote colonic health and induce host immunity. Thus, as they ferment, the resistant starches act as prebiotics, compounds that are conducive to the growth of beneficial microorganisms. Unmodified potato starch has also gained attention following findings of its ability to stimulate the production of short-chain fatty acids in healthy adults.21

Ongoing studies continue to add to our present understanding of the mechanisms at work within the gut microbiome. Further thoughtful and precise research is needed to gain proper insight into how the gut microbiome can be utilized to its full potential in cancer settings.