The text and photograph here are excerpted from a four-volume series of books titled Oncology: Tumors & Treatment, A Photographic History, The Anesthesia Era 1845–1875 by Stanley B. Burns, MD, FACS, and Elizabeth A. Burns. The photograph appears courtesy of Stanley B. Burns, MD, and The Burns Archive. To view additional photos from this series of books, visit burnsarchive.com.

Dr. A. de Montméja reported this case of a thigh tumor in Revue Photographique des Hôpitaux de Paris, Volume 3, 1871, the world’s first medical journal that included original photographs. A French ophthalmologist and photographer, Dr. de Montméja was the founder of the journal and shared editorship with two other physicians during the first 4 years of publication. The co-editor for the first year, 1869, was J. Rengade, MD, and Desire M. Bourneville, MD, (1840–1909) held that position from 1870 through 1872. Dr. Bourneville is also known for identifying tuberous sclerosis. These physicians also worked with French master neurologist Jean Martin Charcot, MD, on his photographic publications.

Between the years 1876 and 1880, Drs. Bourneville and Charcot and Paul Regnard published a much-heralded, three-volume series, Iconographie Photographique de la Salpêtrière. This work became the foundation for clinical photographic atlases. In 1888, Dr. Charcot founded the longest-running medical photographic journal Nouvelle Iconographie de la Salpêtrière. This journal of neuropsychiatric disease was published from 1888 to 1918. Although these physicians are noted for their clinical accomplishments, their important role in early medical photographic publication has not been generally acknowledged. Often in these early journals, the associates or interns of noted surgeons wrote the case reports. In this case of fibrosarcoma, Dr. Maisonneuve was the surgeon, and Dr. de Montméja recorded the treatment.

The patient presented himself to the service of Dr. Maisonneuve at l’Hôtel-Dieu with a mass in his thigh. Dr. Maisonneuve reported that he knew of three other cases of similar tumors in the same area. On examination of the patient, a pedicle was looked for, but none was found. The tumor had large grooves with dilated veins. The grooves and veins indicated significant vascularity of the tumor. 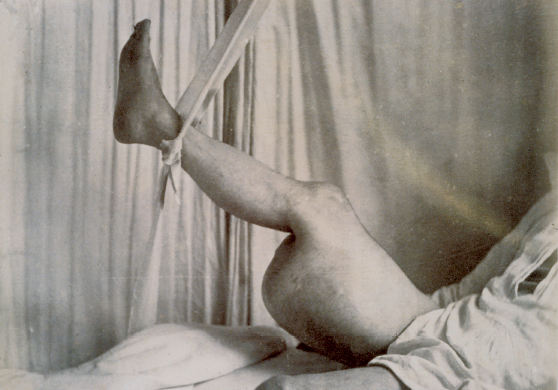 Review of other recent cases revealed there was a patient at the Hospital Bicêtre with a similar type lesion that was not operated upon. This patient’s tumor was infected, and he died. An abscess had developed in the middle of the tumor, and then it showed through (as sinuses) at different places in the tumor. At autopsy, a pedicle was found with large blood vessels.

Two other cases were treated by surgery. The operations were painful, difficult, and long. Each had a large pedicle that was tied with ligatures and cut. However, the patients lost a lot of blood during the operations. The superficial veins on the tumor formed a rich anastomosis with the skin veins, so hemorrhage couldn’t be controlled fast enough. One patient died soon after the operation; the other died a few days later from infection.

Dr. Maisonneuve operated upon the patient. Using the knowledge of the surgical history of the other patients with thigh tumors, he decided to avoid the surface vessels. He made a wide oval incision about the lesion. Seizing the sides of the skin wound with his hands, he peeled the center tumor away until he found the pedicle. He then placed a ligature around it, tied it, and cut it. The tumor was then removed, with little hemorrhage. The wound was then sutured closed. The patient was “quite cachexic prior to the operation, and, surprisingly, he took some time with his diminished strength to surrender to the disease.”

Despite the death of the patient, Dr. Maisonneuve commented that his method of operation offered great advantages as to speed, but it demanded a lot of strength from the surgeon. The method is somewhat brutal, and it doesn’t have the elegance of usual surgery, but it places the patient in better condition for success. The main point for success is the general condition of the patient, which remains the chief obstacle to the surgical trauma.

Although the diagnosis given was in the 19th-century diagnostic terminology, the presentations allow the modern reader to appreciate the advancement in cancer surgery diagnosis and treatment.