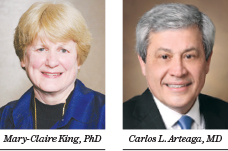 Mary-Claire King, PhD, will receive the William L. McGuire Memorial Lecture Award at the 2020 San Antonio Breast Cancer Symposium (SABCS), to be held virtually from December 8 to 12, 2020. The William L. McGuire Memorial Lectureship was established in 1992 to commemorate Dr. McGuire’s significant contributions to breast oncology. Dr. McGuire, along with Charles A. Coltman, MD, founded SABCS in 1977.

American Cancer Society Professor of Genome Sciences and Medical Genetics at the University of Washington in Seattle, Dr. King is being recognized for her groundbreaking research in genetics, including the discovery that the BRCA1 gene harbors mutations causing hereditary breast and ovarian cancers. At the meeting, she will discuss the genetics of inherited breast cancer.

Groundbreaking Research With Many Applications

Dr. King’s seminal work used pedigree and molecular analysis to identify the location of a then-hypothetical gene for breast cancer. By specifically studying families in which breast cancer occurred at a young age, she linked the BRCA1 gene on chromosome 17 with hereditary breast and ovarian cancers. Building on this research, other investigators identified BRCA2 as a second gene for breast and ovarian cancers. Dr. King’s findings have led to the integration of genetic testing as a crucial component of cancer prevention and to the development of poly (ADP-ribose) polymerase inhibitors as treatment for patients with BRCA1 or BRCA2 breast or ovarian cancer, and, most recently, for men with BRCA1 or BRCA2 prostate cancer.

In addition to her work in cancer research, Dr. King has successfully identified genes that cause hearing loss and others responsible for schizophrenia. A fierce human rights activist, Dr. King used her knowledge of genetics to develop mitochondrial DNA sequencing to identify kidnapped children. Her work is credited with combating human rights abuses on six continents.

“It’s a terrific honor to be recognized with the Bill McGuire Award,” said Dr. King. “From the 1970s on, Bill McGuire was my hero in breast cancer research. His encouragement of me, a young kid coming to breast cancer research out of left field [mathematic biology], was so important when I began this work. He respected the idea of genetic predisposition to breast cancer. He was critical and thoughtful and constructive. For him to pay attention to my work gave me courage. I thank his next-generation colleagues very much for an award that will link my work forever to his name.”

Dr. King has received many scientific awards and honors, including election to the National Academy of Medicine and the National Academy of Sciences, the Lasker Award for Biomedical Research, and the National Medal of Science. She was the SABCS Distinguished Lecturer in Breast Cancer Research in 2014. “We are thrilled to be able to recognize the outstanding contributions of Dr. King to breast cancer genetics, prevention, and care and the impact she has had on many with or at risk of the disease,” said Carlos L. Arteaga, MD, Co-Director of SABCS.