As Dr. Thomas reported, cyclin-dependent kinase (CDK) inhibitors are now standard of care in the first-line setting for advanced hormone receptor–positive breast cancer, with multiple studies having demonstrated both progression-free and overall survival benefit with the addition of CDK inhibition to antiestrogen therapy compared with antiestrogen therapy or chemotherapy alone.2 Because none of the three U.S. Food and Drug Administration (FDA)-approved agents in this class (palbociclib, ribociclib, and abemaciclib) have shown superiority over the other, however, specific toxicity profiles must be considered when selecting a CDK inhibitor for an individual patient. 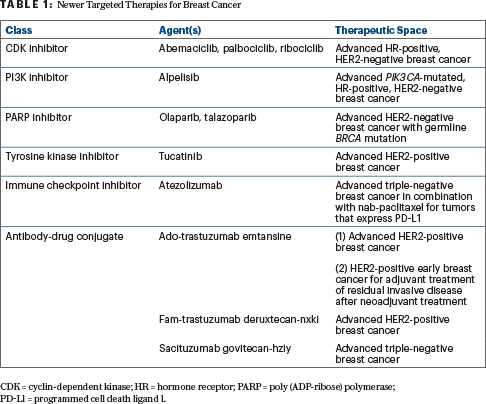 One notable and frequent toxicity is neutropenia, said Dr. Thomas, who recommended regular, upfront monitoring that can be de-escalated over time. Because CDK inhibition is infrequently associated with febrile neutropenia, however, routine use of granulocyte colony-stimulating factor is not advised. The frequency of grade 3 and 4 neutropenia also decreases with extended therapy, suggesting cumulative toxicity is unlikely, said Dr. Thomas.

Abemaciclib is also associated with diarrhea, and ribociclib is associated with QTc prolongation and liver abnormalities. Dose reductions and monitoring are recommended for these side effects, said Dr. Thomas, who noted that dose reductions per guidelines are generally effective and do not appear to impact progression-free survival.

FDA approval of the first PI3K inhibitor for the treatment of breast cancer was based on data from the SOLAR-1 trial, which showed a median progression-free survival of 11 months with the addition of alpelisib to fulvestrant in patients with PIK3CA-mutated tumors vs 5.7 months for fulvestrant plus placebo.3

Two oral poly (ADP-ribose) polymerase (PARP) inhibitors, olaparib and talazoparib, are available for the treatment of advanced breast cancer in patients with known or suspected deleterious germline BRCA mutations, and both agents have demonstrated a progression-free survival benefit compared with single-agent chemotherapy in patients previously treated with chemotherapy in the neoadjuvant, adjuvant, or metastatic setting.4,5 Although an overall survival benefit was not demonstrated, said Dr. Thomas, follow-up was limited and crossover could have confounded these results.

Importantly, PARP inhibitors were relatively well tolerated compared with single-agent chemotherapy, with quality-of-life analysis also favoring PARP inhibition, said Dr. Thomas. She noted that most adverse events were of a low grade, and dose reduction or supportive care is recommended.

Although talazoparib did have higher rates of grade 3 or 4 hematologic toxicities relative to single-agent chemotherapy, rates of PARP inhibitor treatment discontinuation were low. Moreover, cumulative exposure with extended cycles of talazoparib did not increase the incidence or severity of anemia.

Of note, both olaparib and talazoparib are associated with the risk of myelodysplastic syndromes and acute myeloid leukemia, Dr. Thomas reported.

Tucatinib, the most recently approved tyrosine kinase inhibitor, showed a 46% reduction in the risk of disease progression and a 34% reduction in the risk of death when added to trastuzumab and capecitabine in the HER2CLIMB trial.6 Notably, tucatinib appeared to have activity in the central nervous system, said Dr. Thomas, improving overall survival for patients with brain metastases in the tucatinib arm.

Although the rates of diarrhea were overall higher with tucatinib, grade 3 diarrhea was infrequent in both arms. Any grade 3 adverse event was also slightly more common with tucatinib, but agent discontinuation was infrequent, said Dr. Thomas. Of note, tucatinib can cause mild creatinine elevations without changes in glomerular filtration.

In this trial, the withdrawal of any agent due to adverse events approached 16% in the atezolizumab arm and was just over 8% in the placebo arm. Importantly, said Dr. Thomas, immune-mediated toxicities from checkpoint blockade can occur early, during, and even after treatment with these agents.

Three antibody-drug conjugates are currently available to treat breast cancer, with many more in development. Although this type of precision targeting is appealing and is often therapeutically effective, said Dr. Thomas, toxicities remain a concern with this class of agents. The side-effect profile of antibody-drug conjugates—including ocular concerns that have been seen with several agents in development—can mimic that of their antineoplastic cargo, or they can be less common.8,9

“Having been approved several years ago for advanced disease, ado-trastuzumab emtansine (T-DM1) is familiar to us now,” said Dr. Thomas. “With this agent, rates of left-ventricular dysfunction are similar to those with single-agent trastuzumab, and similar monitoring is recommended.”

T-DM1 is also associated with frequent low-grade hepatotoxicity and thrombocytopenia, although rare deaths from severe manifestations have occurred. Notably, patients on T-DXd can experience hemorrhage in the absence of thrombocytopenia or anticoagulation, said Dr. Thomas.

Finally, sacituzumab govitecan, which was approved in April 2020 for patients with triple-negative breast cancer, targets Trop-2 and carries an irinotecan metabolite as cargo.10 Sacituzumab govitecan has an adverse-event profile that is similar to that of irinotecan and has black box warnings for severe diarrhea and severe neutropenia. According to Dr. Thomas, further understanding of the adverse-event profile will likely come in the postmarketing period.

“In this era of rapidly emerging drugs and drug classes, it will be critical to follow recommended monitoring and to collectively remain vigilant for postmarket effects, such as the pulmonary toxicity described years after the initial approval of CDK inhibitors,” Dr. Thomas concluded. “It will also be important to develop and maximize the use of predictive biomarkers and response-based imaging to further optimize agent dose and timing for our patients.”