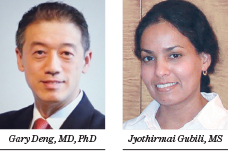 The ASCO Post’s Integrative Oncology series is intended to facilitate the availability of evidence-based information on integrative and complementary therapies sometimes used by patients with cancer. In this installment, Gary Deng, MD, PhD, and Jyothirmai Gubili, MS, present updated information on Ashwagandha—also known as Indian ginseng—because of its increasing popularity as a stress reliever.

Ashwagandha is a shrub prevalent in the dry regions of South and Central Asia and Africa. It is among the popular plants used in Ayurveda, with a medicinal history dating back 3,000 years. The berries, leaves, and roots are employed in formulations to relieve stress, fatigue, and pain and to treat skin diseases, diabetes, gastrointestinal problems, arthritis, and epilepsy. Ashwagandha is also prescribed by many practitioners as a general tonic to improve overall health.

The supplemental forms, sold as capsules, tablets, powders, and liquid extracts, are used to relieve stress, to rejuvenate, and to improve endurance.

Ashwagandha has demonstrated neuroprotective,1,2 anti-inflammatory,3 immunomodulating,4 chemopreventive,5 and radiosensitizing effects6 in preclinical studies. In addition, improvements in hyperglycemia, hyperinsulinemia, and insulin sensitivity were observed in a murine model of type 2 diabetes.7 Pharmacologic data revealed the active constituents to include alkaloids, steroidal lactones, and saponins.

Ashwagandha has been evaluated for its potential benefits in small clinical studies. For instance, in an early trial involving 81 patients with moderate to severe anxiety lasting longer than 6 weeks, 300 mg of Ashwagandha extract taken twice a day for 12 weeks was reported to decrease anxiety scores by 56.5% (P < .0001), compared with 30.5% (P < .0001) in the control group receiving psychotherapy. Researchers also observed significant differences between the groups in terms of mental health, fatigue, social functioning scores, and overall quality of life.8

Ashwagandha may also be useful against stress, as evidenced in a study of 60 stressed healthy adults randomly assigned to 240 mg extract once daily for 60 days or placebo. Data showed supplementation to significantly reduce measures of anxiety (P = .040) and stress (P = .096), along with reductions in the levels of morning cortisol (P < .001) and dehydroepiandrosterone sulfate (P = .004).9 Additional randomized studies also showed improvements in symptoms and stress levels in patients with schizophrenia after supplementation (as an adjunct to psychotic medications)10,11 as well as improvements in cognitive function in patients with bipolar disorder.12

In a randomized trial involving overweight men between the ages of 40 and 70, Ashwagandha (21 mg of withanolide glycosides, once a day, for 8 weeks) was found to elevate testosterone levels, which was not observed in the placebo group.14 The implications for patients with hormone-sensitive cancer are not known.

Physicians should be aware of the growing patient interest in herbal products for relieving anxiety and stress; of the adverse effects associated with their use; as well as their potential for interacting with some prescription drugs.

Ashwagandha has also been evaluated in oncology settings. In an open-label study, 100 patients with breast cancer were given a standardized extract (2 g every 8 hours) throughout chemotherapy. Researchers reported reduction in chemotherapy-induced fatigue (P < .001 with Piper Fatigue Scale; P < .003 with Schwartz Cancer Fatigue Scale) along with improvement in quality of life (P < .001).15 Larger trials are needed to validate these findings, establish an optimal dose, and determine long-term safety.

Mechanistic studies have shown that withanolides, active compounds derived from the roots and leaves, have biologic effects similar to those of steroids.13 Triethylene glycol, a compound found in the leaves, was identified as an active sleep-inducing compound in a murine model.16 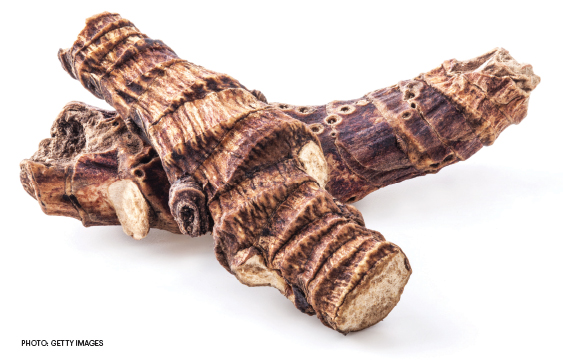 Ashwagandha has also been reported to enhance the effects of radiation therapy21 by reducing tumor glutathione levels6; and to reverse paclitaxel-induced neutropenia22 in murine models.

Nausea, headache, and gastritis were reported in a clinical study, but they were managed with standard therapies.13

Thyrotoxicosis was observed in a 32-year-old woman following ingestion of Ashwagandha capsules for chronic fatigue. Symptoms resolved after discontinuing its use.24

Burning, itching, and discoloration of skin/mucous membranes were reported in a 28-year-old man after consuming Ashwagandha for decreased libido. Symptoms abated with conventional treatment.25

Ventricular tachycardia has been associated with the use of herbomineral preparations that contained Ashwagandha.26

Anticonvulsants, Barbiturates, and Benzodiazepines: Preclinical studies suggest that Ashwagandha has sedative and GABAergic properties and thus may have additive effects.28,29 Whether these interactions are clinically relevant is not known.

Limited clinical data suggest the utility of Ashwagandha in reducing anxiety and symptoms of osteoarthritis. In a study of overweight men, Ashwagandha increased testosterone levels. Thus, patients with hormone-sensitive prostate cancer should consult with their physicians before using Ashwagandha.