Two lung cancer experts debated this point at the 2019 Debates and Didactics in Hematology and Oncology in Sea Island, Georgia, sponsored by Winship Cancer Institute of Emory University School of Medicine.1

Representing the “pro” position in this controversy was Rathi Pillai, MD, and promoting the use of single agents was Conor E. Steuer, MD. Both are Assistant Professors in the Department of Hematology and Medical Oncology at Emory. The speakers focused on patients with stage IV cancer with high levels of expression of PD-L1, a ligand of programmed cell death protein 1 (PD-1).

“High PD-L1 expressers do well with pembrolizumab alone, but maybe not as well as we may believe,” according to Dr. Pillai. “High PD-L1 expressors, in fact, have the best outcomes with chemotherapy plus immunotherapy.”

“I think we really need to use our best drugs upfront. Remember that many patients with metastatic lung cancer don’t get the opportunity to go on to second-line therapy,” she said.

“I think we really need to use our best drugs upfront. Remember that many patients with metastatic lung cancer don’t get the opportunity to go on to second-line therapy.”
— Rathi Pillai, MD

However, the more recent results from an update of ­KEYNOTE-042 were less robust. This study included 1,272 patients with ≥ 1% expression.3 In the subset with ≥ 50% expression, the response rate was 39.5%, median overall survival was 20 months (HR = 0.69), and median progression-free survival was 7.1 months, which was not statistically superior to chemotherapy, she noted.

“I think this study gives us pause in our enthusiasm for pembrolizumab monotherapy in high PD-L1 expressers,” she said.

In contrast, when checkpoint inhibitors have been combined with chemotherapy, as they were in KEYNOTE-189, ­KEYNOTE-407, and IMpower150, response rates in the first-line setting have exceeded 60% and median progression-free survival has ranged from 8.0 to 12.6 months in high expressers. The overall survival data are not as mature as for the monotherapy studies, “but we have seen some statistically significant improvements in overall survival with chemoimmunotherapy,” Dr. Pillai said.

Although chemoimmunotherapy does carry the potential for more toxicity, she urged listeners “not to be scared off by this.” In the three main combination studies, treatment-related adverse events were similar to those seen with chemotherapy alone, including grade 5 toxicities—an observation she called “quite surprising in the field.”

“I don’t think we should hesitate to use chemoimmunotherapy, given that we medical oncologists are well trained in managing most of the toxicities we see with chemotherapy alone,” she ­commented.

‘Give Your Best Shot First’

Arguing for combination strategies, Dr. Pillai reiterated her belief that the best treatment should not be withheld in the first-line setting. She cited studies showing that around 40% to 60% of patients with NSCLC never receive their intended second-line treatment, even though, in the trial setting, their performance status is good. “We may only have one opportunity to treat patients in the metastatic setting; therefore, we should use our best drugs upfront,” she maintained.

“[Immunotherapy alone] is better tolerated, and there are no real differences so far in progression-free or overall survival.”
— Conor E. Steuer, MD

“I believe that chemoimmunotherapy is the best choice for patients who have high PD-L1 expression, and the toxicity is manageable,” she said. “Even though impressive survival improvements were reported in KEYNOTE-O24, they’re maybe not quite as impressive in a broader group of patients, as in KEYNOTE-042.”

Both PD-1 inhibitors alone and in combination with chemotherapy are approved by the U.S. Food and Drug Administration, “and you’re not wrong if you choose one or the other, but I think you’re ‘more right’ if you use immunotherapy alone,” Dr. Steuer maintained when he took the podium.

He conceded that immunotherapy plus chemotherapy yields “slightly better response rates” but gave multiple reasons for favoring immunotherapy alone. “It’s better tolerated, and there are no real differences so far in progression-free or overall survival. It’s less expensive. There’s less time in the chair for patients and less need for premedication and supportive medication. You’re going to typically wait for genomic testing results to start, and if you start with immunotherapy alone, you can always add chemotherapy later,” he said.

Data described by Dr. Steuer from the phase III KEYNOTE-024 study were from a subset analysis of patients with ≥ 50% PD-L1 expression (comprising 30% of the overall population, mostly with nonsquamous histology). He emphasized the good outcomes with pembrolizumab alone: a response rate of 45% and median overall survival of 30 months.

“I can see that the response rates are higher for chemoimmunotherapy, but the progression-free survival is basically the same between the arms, and there’s no real difference in overall survival (or not reported yet),” he noted (Table 1). 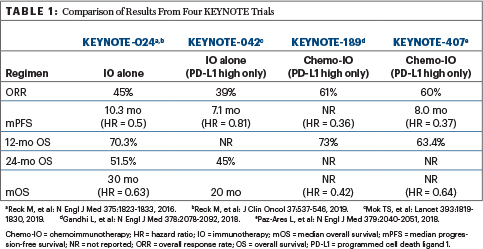 Clearly, in terms of toxicity, Dr. Steuer continued, “immunotherapy alone is the clear winner.” He viewed the comparison of toxicity between single-agent pembrolizumab and the combination somewhat differently from Dr. Pillai, noting that in the major KEYNOTE trials—024, 042, 189, and 407—treatment-related adverse events were observed in 63% to 73% vs almost 100%, respectively. Grade 3 to 5 adverse events were more common with the combination, as were drug discontinuations and deaths due to treatment.

“While we do know how to manage toxicities, if we can give our patients less of this, we’d like to edge toward that,” he commented.

Although some experts make an argument for using combinations in patients with “large tumor burdens,” Dr. Steuer called this a vague concept. “Is it one large lesion? Multiple bone lesions? More visceral involvement? It’s a vague term that’s hard to put into practice,” he said.

“If I think I need systemic therapy because of a large tumor in a symptomatic patient, I usually favor another modality, such as radiotherapy. Systemic treatment does not typically work fast enough to relieve acute issues. You can add chemotherapy if you see disease progression on scans after two cycles,” he said. “Is a mild-to-moderate increase in response worth all the extra toxicity?”

Finally, Dr. Steuer commented on how additional drugs impact not only the cost of care but quality of life for patients—not only in terms of toxicity but in time spent in the infusion chair. And he noted that using chemotherapy upfront begs the question of what to give next when the patient has disease progression.

“Most lung cancer doctors are believers in using the best drugs upfront, and this is a common discussion in the targeted therapy world,” he agreed. “However, it’s not clear that chemoimmunotherapy is that best treatment.” ■

1. Pillai R, Steuer C: Debate: What do you recommend for stage IV patients with high PD-L1 expression? 2019 Debates and Didactics in Hematology and Oncology. Presented July 26, 2019.