Venetoclax and Beyond: Successfully Targeting BCL2

Although many agents have been able to successfully inhibit the proliferative capacity of cancer cells or disable mutations that spur cancer growth, one area that has proven elusive is the apoptotic pathway—the cell’s means of resisting death. That is until recently.

It may seem like a small difference—20 mg vs 50 mg—but it turned out that if you started with 20 mg, the risk of tumor-lysis syndrome was reduced…. That’s why the 20-mg dose was selected going forward.
— Matthew S. Davids, MD, MMSc

Dysregulation of B-cell leukemia/lymphoma-2 (BCL2) is fundamental to the pathophysiology of many hematologic malignancies, and these regulatory proteins can now be therapeutically targeted. BCL2-targeting compounds—led by venetoclax -(Venclexta)—are starting to impact the outcomes of several hematologic malignancies. Venetoclax was recently granted approval for patients with chronic lymphocytic leukemia (CLL) and small lymphocytic lymphoma (SLL), with or without a 17p deletion, who have received at least one prior therapy.

“It was challenging to generate BCL2-selective inhibitors. There were many early attempts to target BCL2 that were largely unsuccessful but provided important lessons moving forward,” said Matthew S. Davids, MD, MMSc, Director of the Lymphoma BioBank and Assistant Professor of Medicine at Dana-Farber Cancer Institute and Harvard Medical School, Boston. As recipient of the first James O. Armitage Clinical Investigator Award at the 2018 Pan Pacific Lymphoma Conference in Maui, Dr. Davids described the importance of BCL2 inhibition, the efficacy of venetoclax, and future directions involving this class of drugs.1

The BCL2 family consists of regulatory proteins that either induce apoptosis (proapoptotic) or inhibit it (prosurvival). BCL2, MCL-1 (myeloid cell leukemia-1), and BCL-xL (B-cell lymphoma–extra-large) are prosurvival proteins that are prime targets for anticancer therapy, and molecules targeting each are in various stages of preclinical and clinical development. Venetoclax has proven to be particularly robust in this regard.

“ABT-199, which became venetoclax, is highly efficacious in relapsed or refractory CLL and is also active in certain non-Hodgkin lymphoma subtypes,” Dr. Davids said. “Medicinal chemists were able to improve upon earlier compounds by engineering some clever changes to the molecule that resulted in ABT-199. Although its predecessor navitoclax offered a ‘shotgun’ approach, striking tumor cells and platelets alike, venetoclax is like a ‘sniper rifle’ that kills tumor cells while sparing platelets,” he said.

Mitochondria in tumors such as CLL express high levels of BCL2, thus inhibiting apoptosis. On the mitochondria’s surface, BCL2 is bound up with BH3-only proteins, which are proapoptotic. Normally, these proteins interact with Bax and Bak, which are effector molecules that can kill the tumor cell, but because BCL2 is abundant, it can “soak up” these proapoptotic BH3-only proteins, explained Dr. Davids, who recently published an article reviewing this biology.2

Venetoclax interacts with the BCL2 molecule even more tightly than the native BH3-only proteins, ultimately allowing Bak and Bax to penetrate the mitochondria outer member, thus triggering a cascade that leads to cell death. In the lab, venetoclax can induce apoptosis in CLL cells after as little as 1 hour, he said.

Early studies of venetoclax documented this rapid onset of apoptosis in the blood of patients, but at the same time, tumor-lysis syndrome occurred in some patients.

“I presented the initial clinical data on ABT-199 in humans at the 2012 ASH Annual Meeting & Exposition.3 We saw outstanding activity in CLL and also in non-Hodgkin lymphoma at a variety of doses, suggesting it was a potent molecule. Soon after that meeting, I received the first phone call that a patient on 50 mg of ABT-199 had died due to the consequences of clinical tumor-lysis syndrome. Subsequently, a second patient died, and this halted the early development of the drug,” Dr. Davids recounted.

The concern was that venetoclax “might work too well and too soon,” resulting in this potentially fatal condition. Thus, the drug’s development was placed on hold by the U.S. Food and Drug Administration. Fortunately, a collaboration of the drug’s manufacturer with a team of academic investigators determined the risk factors for tumor-lysis syndrome (based on nodal mass and lymphocyte count) and devised a risk-mitigation strategy. Careful pharmacokinetic analyses on the phase I trial found that dosing was also important.

Efficacy in CLL and Lymphoma

In the phase II M13-982 study of venetoclax in relapsed or refractory del(17p) CLL (a high-risk type), dramatic reductions in lymphocyte count and nodal size were observed.4 Earlier this year, M14-032—which was the first prospective study of any treatment for patients with CLL whose disease progressed on a kinase inhibitor—showed the drug to be active after ibrutinib (Imbruvica) therapy, yielding 42% of patients negative for minimal residual disease and 75% free of disease progression at 12 months.5 Venetoclax was also active in patients whose disease progressed on idelalisib (Zydelig).6

Meanwhile, Dr. Davids’ laboratory is particularly interested in mitochondrial priming, which is the proximity of cells to the apoptotic threshold, and in BH3 profiling, developed previously at Dana-Farber in the laboratory of Dr. Anthony Letai, where Dr. Davids did his postdoctoral laboratory fellowship, is based on the interactions of “sensitizer proteins” that interact with BCL2 and other antiapoptotic proteins. This functional assay may help prioritize novel agent combinations and predict response.7

“In the big picture, BH3 profiling is trying to detect what we call the level of apoptotic priming of a malignant cell. A ‘primed cell’ sits perched on the edge of a cliff, close to apoptosis. A drug can easily push this cell over the edge and into the apoptotic abyss,” he said. “In contrast, an unprimed cell starts farther from this apoptotic threshold, such that if the cell is treated with the same drug and pushed the same distance toward that threshold, but the cell survives because it started farther away from the threshold. That’s what the BH3 profile measures—the distance of the cell to this threshold of apoptosis, which we call priming.”

Dr. Davids’ early work showed that supporting cells in lymph nodes or bone marrow known as stroma can protect CLL cells from apoptosis. Through BH3 profiling, he found that this resistance mechanism may be overcome at least in part due to increased BCL2 dependence related to treatment with PI3 kinase (PI3K) inhibitors. This finding is now being translated into clinical trials, one of which is an investigator-initiated trial that Dr. Davids developed and is leading, evaluating the PI3K-delta/gamma inhibitor -duvelisib plus venetoclax in relapsed or refractory CLL and SLL.

Efforts are underway to find optimal partners for venetoclax. Dr. Davids developed one study to evaluate venetoclax as a chemosensitizer in patients with Richter’s transformation. Patients are treated with one cycle of R-EPOCH (rituximab plus etoposide, prednisolone, vincristine, cyclophosphamide, doxorubicin) to obtain disease control, followed by an accelerated dose ramp-up of venetoclax over 5 days, then up to 6 cycles of dose-adjusted R--EPOCH plus venetoclax. Patients achieving remission can proceed to allogeneic transplant or continue on venetoclax maintenance. Novel-novel drug combinations may also be potent, especially in CLL. Dr. Davids noted the synergy between venetoclax and inhibitors of Bruton’s tyrosine kinase [BTK], addressing two of the “Achilles’ heels of CLL pathophysiology,” he said. In collaboration with Dr. Letai, Dr. Davids recently showed the BTK and BCL2 inhibition have distinct and complementary effects on CLL mitochondria.

To further explore the potential for this and other combinations, Dr. Davids and his team are now using dynamic BH3 profiling. This is a newer variation of the original BH3 profile technology in which primary CLL cells from untreated patients are exposed ex vivo to a variety of drugs; the BH3 profiling assay reveals which drugs cause the biggest changes in priming and therefore may be most effective in certain patients. This approach, when used on CLL patient samples exposed to BTK inhibitors (ibrutinib or acalabrutinib [Calquence]) plus the BCL2 inhibitor venetoclax provided further evidence for the potential of this combination in patients.7

“When we combined the two drugs together, we saw remarkable changes in both priming and BCL2 dependency, suggesting this will be a potent combination,” he commented. “There are now several trials underway around the world evaluating this approach in CLL.”

One such study, developed and led by Dr. Davids, is a phase II investigator-initiated study of acalabrutinib, venetoclax, and obinutuzumab (Gazyva) as front-line therapy for patients with CLL with any risk profile. The primary endpoint is the rate of bone marrow minimal residual undetectable complete response at 15 months. “The hope is that patients who are [minimal residual disease]–undetectable after a 15-month time-limited regimen can then come off therapy. If they relapse, they can go back on the doublet of acalabrutinib and venetoclax,” he said.

With an effective BCL2 inhibitor now established, researchers are pushing toward targeting other antiapoptotic proteins, including MCL-1 and BCL-xL. “There are some really exciting drug prospects now to target these proteins,” he said.

Dr. Davids described how serial BH3 profiling may help guide treatment with the various BH3 mimetics in the future. For example, venetoclax would clearly be a good first option for BCL2-dependent patients. For the smaller subset of CLL patients whose tumors depend more on BCL-xL or MCL-1, compounds targeting both of those proteins might be more efficacious. For patients with both BCL2 and BCL-xL dependency at baseline, navitoclax, which targets both proteins, may be helpful. As BH3 profiling reveals how such dependency changes over time, other drugs could be added or substituted, he explained.

“This is how I see the future of BH3 mimetic therapy. It’s certainly an approach we need to validate in larger numbers of patient samples, but I think it could be a novel way to individualize therapy for patients with hematologic malignancies,” Dr. Davids commented. “The BH3 profiling technique provides insights into some of the aspects of venetoclax treatment, including the mechanism of action in the drug, predicting the depth of response and hopefully identifying optimal combination partners moving forward.” ■ 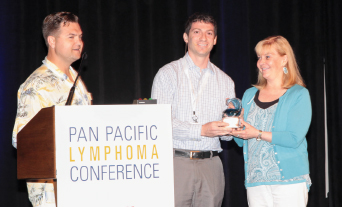