For this installment of the Living a Full Life series, guest editor Jame Abraham, MD, spoke with breast cancer surgeon Hannah Hazard-Jenkins, MD, Associate Professor of Surgery West Virginia University (WVU) Department of Surgery and Director of Clinical Services for the WVU Cancer Institute, Morgantown. Focusing on benign and malignant diseases of the breast, Dr. Hazard-Jenkins is an integral part of the multidisciplinary team of physicians and health-care providers at the Mary Babb Randolph Cancer Center of the WVU Cancer Institute.

Dr. Hazard-Jenkins is the daughter of a defense lawyer, and early on she had decided to follow her father’s footsteps into the courtroom. “I went to Dickinson College for my undergraduate degree, largely because it had a law school attached to it and my thinking at the time was to become a lawyer. My father was a lawyer, and for the better part of my early life, he defended doctors in malpractice suits. He told me and my two younger siblings that the only thing we should be when we grow up was either a teacher or a physician because they were the only two good professions left in the world,” she quipped.

On entering a male-dominated field: “I trained in an era when surgery was a predominantly male-dominated discipline. However, our incoming surgical residency class of four (three females and one male) indicates a nice shift toward an equitable state.”

On balancing personal needs and career obligations: “Work is vital, but family comes first. We are not defined by our jobs, but still we practice oncology because we love it and have an inner passion for patient care.”

Words of wisdom for young oncologists: “The first advice is honest introspection. You have to truly love oncology, because it is a demanding field that requires a certain type of commitment. It’s not a career you try out; you have to be sure about it.”

Dr. Hazard-Jenkins continued: “When my parents dropped me off at college, my father told me to take whatever courses I wanted, as long as they allowed me to take the MCATs. Being the typical stubborn first-born child, I wasn’t going to do what my father wanted. However, it was January of my first year at college, and I was watching the evening news about the genocide in Somalia and had an ‘ah-ha’ moment. I decided I wanted to become an international doctor.”

Perhaps I live in a rose-colored-glasses world, but by and large, I think there are some nuanced advantages to being a woman in oncology, especially in breast cancer.
— Hannah Hazard-Jenkins, MD

During medical school at WVU, Dr. Hazard--Jenkins originally dreamed of becoming a pediatrician, but during her third year, she did a rotation on the pediatric ward. The cases she saw—one was a victim of severe child abuse—dissuaded her from pediatrics. “When I moved on to gynecology, there were a couple of gynecology/oncology surgeons who collared me in the OR and let me make my first incision; it was instant love. I went on to surgery. Although I had one small moment of indecision, I ultimately knew in my heart I was a surgeon. And I’ve never looked back,” Dr. Hazard-Jenkins shared.

Pursing her dream of international work, Dr. Hazard worked in Guatemala during medical school and residency and went to Africa in 2013. “In Africa, I worked as a preceptor for the international program of WVU School of Medicine. It was an eye-opening experience, to say the least. The definition of general surgery in Africa and in the States is starkly different. It was a humbling few weeks that certainly made me a stronger doctor,” she said.

In addition to her clinical practice, Dr. Hazard-Jenkins previously served as a member of the WVU School of Medicine Admissions Committee and as the School’s Assistant Dean of Admission. More recently, she accepted the position of Director of Clinical Services for the WVU Cancer Institute with the task of improving the quality of care, regionalization, and recruitment of additional surgical oncologists. Given the many hats she wears, she has to balance a busy daily schedule. “My work day gets started at home a couple of hours before I need to be at the hospital, typically to do charts and to take care of my family,” she explained. 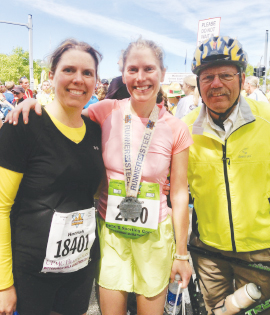 From left to right: Dr. Hazard-Jenkins, her sister Rebecca Dick, and her father Sprague W. Hazard, at the Pittsburgh 1/2 marathon.

Dr. Hazard-Jenkins’ ultra-busy surgical career became wonderfully more complicated with newfound family responsibilities some 3 years ago, when she married and became a stepmom to three children and three dogs as well as gave birth to a daughter (who is now 22 months old). “After everything’s in place at home, I work at the clinic on Mondays and Tuesdays, and the rest of the week is predominantly spent in the operating room. I leave work at 4:00 or 5:00 PM, to pick up my daughter from day care and spend quality time with the whole family,” she said.

Dr. Hazard-Jenkins used a personal experience to highlight the challenge of balancing personal needs with career obligations. “A great example of the human element involved in making tough choices in the context of a very demanding career was a year and a half ago, when my dad became seriously ill. At that point, I had to make a tough decision, and my family needs took priority over my career needs. People at work understood. Work is vital, but family comes first,” said Dr. Hazard-Jenkins. “We are not defined by our jobs, but still we practice oncology because we love it and have an inner passion for patient care.” 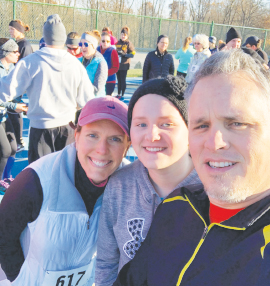 Dr. Hazard-Jenkins with stepdaughter Madison and husband Mark, at the Turkey Trot 2017 in Morgantown.

Dr. Abraham noted that although women have made headway into leadership roles in oncology, it is still a male-dominated profession, especially in surgery. He asked Dr. Hazard-Jenkins to comment. “To some degree, that issue gives me pause. Of course, I know sexism exists in some arenas in medicine. When I was in surgical residency, there were only two female residents above me and one below me. I trained in an era when surgery was a predominantly male-dominated discipline. However, our incoming surgical residency class of four (three females and one male) indicates a nice shift toward an equitable state,” shared Dr. Hazard-Jenkins.

It’s essential to listen to advice from mentors and senior colleagues; most people in this field want to help each other succeed and become better doctors and leaders.
— Hannah Hazard-Jenkins, MD

To that end, Dr. Hazard-Jenkins noted the advantages a woman has in her discipline. “I chose a profession in which women largely would rather see a female breast specialist instead of a male. However, from an administrative perspective, I think there is still some residual old boys’ club mentality in the power structure. Perhaps I live in a rose-colored-glasses world, but by and large, I think there are some nuanced advantages to being a woman in oncology, especially in breast cancer. I’m very happy about the arc of my career and don’t feel disadvantaged because I’m a woman,” she commented.

Studies indicate that career women who have young children face difficult challenges, both professional as well as emotional. After nearly a decade as a valued member of WVU’s multidisciplinary breast cancer team, Dr. Hazard-Jenkins suddenly became a mother. Asked to describe the challenges she faced, she replied: “I had established a strong relationship with my colleagues at WVU, so when my daughter and stepchildren came into the picture, I cut my schedule (no longer staying until 6:00 and 7:00 PM) to prioritize child care and never got any pushback from my colleagues. Women in this position need to listen to their gut instincts, because there are a whole variety of ways to mother. There’s no script to follow. Just do what you feel is best for your family. No matter what, I put my daughter to bed every night.”

As for balancing motherhood and career, Dr. Abraham asked Dr. Hazard-Jenkins what advice she has for young men and women entering the field of surgical oncology. “The first advice is honest introspection. You have to truly love oncology, because it is a demanding field that requires a certain type of commitment. Residency alone is a demanding 5 years of hard work, and your family needs to be committed as well. It’s not a career you try out; you have to be sure about it. The operating room becomes your home, a sanctuary of sorts.” 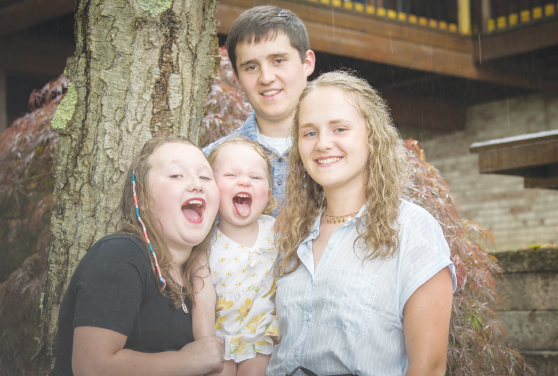 Next, Dr. Hazard-Jenkins added, is to be adaptable to change and new ways of looking at things, which, in the dynamic field of oncology, she considers vital. “As for myself, over the past decade at WVU, I’ve had a variety of positions and responsibilities, and it’s important to embrace things that were not written into your career agenda,” added Dr. Hazard--Jenkins. “It’s essential to listen to advice from mentors and senior colleagues, as you’ll find out quickly, most people in this field want to help each other succeed and become better doctors and leaders.”

How does a busy mother and surgeon decompress from the rigors of her daily life? “For a long time, running was my way of distressing and recharging my mental battery. I’ve run several half marathons. I still run, although not as often as I used to. But there is nothing like quality family time to help ground and center yourself,” emphasized Dr. Hazard-Jenkins.

Privilege to Care for Patients With Cancer

In closing, Dr. Hazard-Jenkins offered some advice to the best and brightest individuals preparing for a life in oncology. “Our job is a privilege, and it’s important to come into the field with a firm understanding that it is an honor to care for cancer patients, entering into a vulnerable human life and striving to make it better. Our patients are gripped by anxiety, and we must step back and understand why they act out in certain ways; they have a profound trust that we will make the decision that serves them best. Also, given the challenges of this career, it is important at times to step back and do a self-reassessment and remember why you chose to become an oncologist. And it will always come back to patients.” ■

Surgery Preference and Surgery Received in Women With DCIS