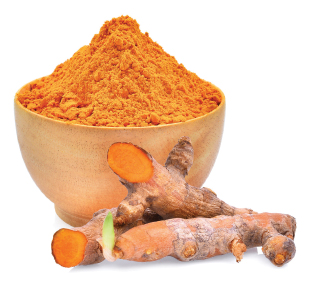 The ASCO Post’s Integrative Oncology series is intended to facilitate the availability of evidence-based information on integrative and complementary therapies commonly used by patients with cancer. In this installment, Gary Deng, MD, PhD, and Jyothirmai Gubili, MS, present information on turmeric, and in particular curcumin, a compound in turmeric, and the biological effects of this herb in patients with diseases, including cancer.

Turmeric, thought to have originated in India, is a perennial herb cultivated extensively in Southeast Asia and in many other warm regions of the world, with a medicinal history that dates back 5,000 years. It is used in traditional medicine for wound healing and to treat stomach ailments. The rhizome is used as a spice in many cuisines and as a coloring agent in food and cosmetics.

Extracts of turmeric are marketed as dietary supplements to improve memory, for arthritis, and for cancer prevention. Turmeric is also available in the form of ointments and creams for topical use.

Following the discovery of a wide spectrum of biologic effects, turmeric’s potential value in the treatment of several diseases, including cancer, is being investigated.

Studies over the past few decades have shown that turmeric extracts contain many bioactive compounds. However, much of the current investigation is focused on curcumin. It exhibits neuroprotective,1 anti-inflammatory,2 immunomodulatory,3 and chemopreventive effects4 and acts as a weak phytoestrogen5 in vitro. Curcumin and its analogs also have demonstrated chemosensitizing and radiosensitizing effects.6,7

In clinical studies, curcumin was shown to be a safe option and equally effective as a nonsteroidal anti-inflammatory drug for the treatment of osteoarthritis of the knee.8 Data from epidemiologic studies suggest improved cognitive performance in elderly Asians who consume turmeric in the form of curry powder.9 But supplementation with curcumin did not produce such benefits in patients with Alzheimer’s disease.10 In other studies, turmeric was reported to help alleviate symptoms of irritable bowel syndrome11 and quiescent ulcerative colitis.12 And preliminary data suggest that a topical turmeric-based cream may be effective for the reduction of radiotherapy-induced dermatitis in patients with head and neck cancer.13

Interest in the anticancer potential of turmeric has also spurred research efforts. In patients with colorectal cancer, the administration of oral curcumin during the presurgery waiting period improved cachexia and general health of patients.14 In a phase II trial involving 21 patients with advanced pancreatic cancer, clinically relevant biologic activity was seen in 2 patients taking oral curcumin, despite limited absorption.15 Findings from additional early-phase studies point to the safety of coadministering curcumin with docetaxel16 and gemcitabine.17

Suggested mechanisms of action include curcumin’s ability to reduce the concentration of tumor necrosis factor–alpha, a key mediator in many inflammatory diseases,18 and to exert biologic effects by inhibiting nuclear traffic via targeting of CRM1, an important nuclear exportin.19 The antitumor actions of curcumin appear to be due to its interactions with arachidonate metabolism and its in vivo antiangiogenic properties.20 Another possible chemopreventive mechanism may be via binding and activating the vitamin D receptor, thereby protecting the small intestine and colon, where vitamin D receptors are expressed. (Vitamin D is known to serve an anticancer function.21)

Despite encouraging findings, efforts to determine the true therapeutic potential of curcumin are impeded by its low bioavailability and, consequently, poor intestinal absorption. But nanoparticle and liposomal curcumin formulations,22 as well as concurrent use of piperine (an alkaloid in black pepper),23 appear promising, as they have been shown to enhance the bioavailability of curcumin.

Allergic dermatitis,24 contact urticaria,25 and transient atrioventricular block26 have been reported following the intake of curcumin.

Anticoagulants/antiplatelets: Turmeric may increase the risk of bleeding due to its antiplatelet properties.32

There is evidence that curcumin has anti-inflammatory activities. However, in cancer patients undergoing active treatment, detrimental interactions with cancer treatment must be considered.

For additional information, visit the About Herbs website at https://www.mskcc.org/cancer-care/-integrative-medicine/herbs/turmeric. ■