Angela H. Brodie, PhD, a pioneer in breast cancer research, passed away on June 7, 2017, from complications of Parkinson’s disease and pancreatic cancer. An obituary for Dr. Brodie was published previously in the June 25, 2017, issue of The ASCO Post. Here, Dr. Balkees Abderrahman shares a heartfelt tribute to the woman who inspired her both personally and professionally.

Angela died in a bed facing six rectangular windows, looking out over a beautiful green terrain, in the same room where her father, Herbert Hartley, preceded her in death many years earlier. On June 17, Harry Brodie, PhD, Angela’s husband of 53 years, shared with me his memories of Angela and their lives together.

Angela was born in 1934, in Oldham, England, where she later attended the Ackworth School, a Quaker boarding school. She survived World War II but forever afterward abhorred violence of any kind. She subsequently earned her BSc and MSc degrees in biochemistry from the University of Sheffield, England, and a PhD degree in chemical pathology from the University of Manchester, England. 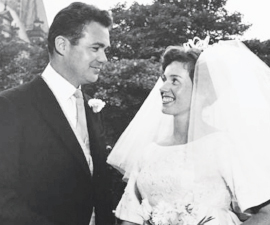 Harry and Angela Brodie on their wedding day.

In 1962, Angela came to the United States as a diminutive, quiet, and seemingly meek English woman, but she had a will of steel. Her religion was one of altruism, and her language was that of humility. Angela arrived in America at a time when women in science were “hidden figures,” but the influence of American core values propelled her to persevere and achieve the American dream.

Angela fought gender bias and prejudice. Harry told me of how she once was refused a drink at a bar because she was a woman. Later, she was told she could not play golf on the weekends because “men worked hard during the week and should enjoy golf on the weekends.” Angela was infuriated by such incidents and beliefs, but she found solace in Harry, a feminist at heart.

A chemist and senior investigator, Harry supported Angela, a pharmacologist, to spearhead a science grant at a time when women were deterred from pursuing a career in science. At the height of her career, Angela was the only woman ever to receive the Charles F. Kettering Prize for her contributions to clinical cancer research. Over time, Angela took on a mission to ensure more women were recruited and supported in science; she served on the board of several committees to advance women scientists.

Laboratory research by Angela and her peers led to the discovery of the first specific aromatase inhibitor, which paved the way for the synthesis of optimized aromatase inhibitors. As a result, tens of thousands of lives have been saved.

For me, Angela’s legacy is the realization that contributions to science by women, the funding of research, and a kind demeanor can revolutionize our nation’s health care and better the lives of our patients.
— Balkees Abderrahman, MD

Carolyn Choate, a breast cancer survivor, received aromatase inhibitor treatment as a last and uncertain possible means to saving her life. The therapy worked, and Carolyn lived. Carolyn recalled that she sent a “thank you” e-mail to Angela, who in turn invited the former patient to her laboratory. Carolyn recalled Angela’s kind demeanor, her compassion for others, and her commitment to the importance of funding for scientific research.

E. Albert Reece, MD, Vice President for Medical Affairs, at the University of Maryland in Baltimore, who worked with Angela for 11 years, said, “She has been a wonderful example of what we call a scientist at her best, and scientific success at its best, applied directly to patients.” And according to several heartwarming testimonials made at her funeral, Angela was a role model to many young and immigrant women who followed in her footsteps and pursued science.

Angela had an exceptional work ethic. She vowed to synthesize the best aromatase inhibitor to be tested in humans and spent most of the 1970s working with Harry to optimize the various compounds and their methods of administration. When Charles Coombes, now Professor of Medical Oncology at Imperial College London, conducted the first clinical trial using an aromatase inhibitor in women with breast cancer, he used the potent compound 4-OHA, the fruit of the Brodies’ work.

Although Angela is known for her contributions to breast cancer, she broadened her work to collaborate with Vincent Njar, MD, Professor of Pharmacology at the University of Maryland. Together, they developed a drug (VN/124-1), which blocks androgen synthesis and was shown to have efficacy in prostate cancer.

Grace in the Face of Challenge

Angela’s perseverance was hard to miss. In 2015, due to her illness, the Brodies were unable to attend an annual dinner for Fellows of the American Association for Cancer Research (AACR). The following year, however, Dr. Jordan recounted the joyful surprise of seeing Angela and Harry walking through the doors of the AACR event to join with him in celebrating the evening. Angela made an extraordinary effort to travel and say goodbye to her colleagues and dear friends over her final years.

Angela devoted her life in research to improving the treatment of breast cancer, and later, prostate cancer. Then, without rhyme or reason, she was stricken with pancreatic cancer, as no one is immune from cancer. Nevertheless, over the decades, the treatment of cancer has evolved from a black box to a blueprint because of pioneers like Angela and many others who embarked on revolutionizing medicine, science, and health care.

Legacy of an Extraordinary Woman

Angela’s life, legacy, and memorial service made me contemplative. As a young physician-scientist, I am deeply troubled that I might not have the same chance to discover or better humankind through medicine and science, under the current purview to slash medical funding. Memories of Angela were a salient reminder that the true legacy of humans comes not only from the accolades they receive, but importantly, from influencing the lives of others. As a woman in science, I remain hopeful that women are being perceived as equals in scientific research and medicine.

For me, Angela’s legacy is the realization that contributions to science by women, the funding of research, and a kind demeanor can revolutionize our nation’s health care and better the lives of our patients.