Although some clinicians may eagerly switch to a hypofractionated regimen as their new standard, others may choose to do it on a case-by-case basis, such as for patients who have minimal baseline genitourinary symptoms.
— Paul L. Nguyen, MD

Radiation for prostate cancer typically requires 40 to 45 daily treatments, given over 8 to 9 weeks. Long fractionation schemes are chosen for most cancers, because they allow for tumor killing while reducing the potential for injury to normal tissue. However, the radiobiology of prostate cancer increasingly has been thought to be different from that of other cancers, so delivering the treatment in a shorter period might lead to similar—or even better—cancer control without a significant increase in toxicity. Such a concept has great appeal, given the large number of men with prostate cancer, the potential cost savings to society, and the convenience for patients if their treatments could be done in less time.

As reviewed in this issue of The ASCO Post and reported in Journal of Clinical Oncology,1 in the NRG Oncology/RTOG (Radiation Therapy Oncology Group) 0415 randomized trial, Dr. W. Robert Lee and colleagues tested this hypothesis by randomizing 1,115 men with low-risk prostate cancer to receive either 73.8 Gy in 41 fractions of 1.8 Gy over 8.2 weeks or 70 Gy in 28 fractions of 2.5 Gy over 5.6 weeks. The hypothesis was that the hypofractionated regimen would prove to be noninferior in terms of disease-free survival vs the standard arm.

At face value, the trial would suggest that for men with low-risk prostate cancer, a moderate course of hypofractionation could shorten treatment time by 2.5 weeks without any decrement to cancer control—but at a cost of a slight increase in late toxicity. It remains to be seen whether this scheme will ultimately be widely adopted in the United States.

For many patients, the convenience of reducing the treatment time from 8.2 to 5.6 weeks may not be reason enough to accept an increase in the risk of late toxicity. On the other hand, treatment techniques have evolved since the trial started; although nearly 80% of men on RTOG 0415 received intensity-modulated radiation therapy, we have since seen the advent of daily image guidance, which can further reduce treatment margins and toxicity to the point where the absolute risk of late toxicity would be reasonably low, even if hypofractionation is used.

The trial also collected patient-reported quality-of-life (QOL) information, and it will be interesting to see whether patients actually experienced any QOL decrements on the hypofractionated arm or not, as this could also alter the risk-benefit analysis of this regimen. In addition, some clinicians may ultimately want to see whether the results hold up with longer-term follow-up and whether further follow-up will reveal more pronounced differences in late toxicities.

Another consideration is that the trial used a dose of 73.8 Gy as the comparator arm. This dose might be considered slightly low by current standards, given the publication of a randomized trial showing that for men with low- or favorable intermediate-risk disease, using 79.2 Gy cuts the risk of recurrence in half vs 70.2 Gy.2

Finally, the trial studied exclusively men with low-risk disease. As many of these men will be receiving active surveillance, it is technically unknown whether these results would apply to higher-risk disease, which could in theory have slightly different radiobiology. In addition, the toxicity results might be different if one were treating prostate plus seminal vesicles for high risk instead of just prostate alone, as in RTOG 0415.

To get a better understanding of where the field is in regard to hypofractionation as a whole, it is useful to look at this trial in the context of the three other large multicenter randomized trials that have evaluated moderate hypofractionation (Table 1).1,-3–5 With the presentation or publication of these four trials, a wealth of data in the hypofractionated space has been amassed over the past 12 months. 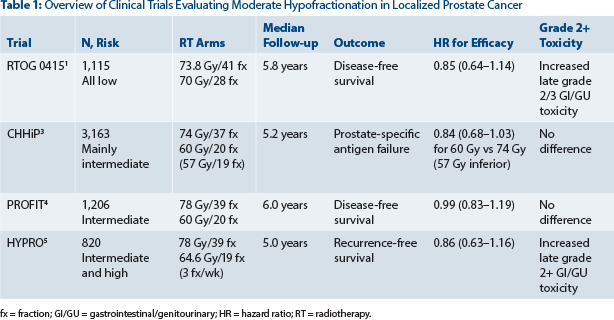 All four trials consistently found that the hypofractionated arms were noninferior in terms of disease control. Although like the RTOG 0415 trial, the Dutch HYPRO trial5 also found an increase in late toxicity, the CHHiP3 and PROFIT4 trials, which both used a regimen of 60 Gy in 20 fractions, found no difference in late toxicity between the hypofractionated and control arms, which were 74 Gy/37 fractions and 78 Gy/39 fractions, respectively.

Taken together, these trials enhance confidence that moderate hypofractionation can be safely done for a wide range of risk groups without losing efficacy. The increased late toxicity seen in two of the trials is somewhat tempered by the fact that it was not seen in the other two trials (ie, in the two 60/20 trials). Although some clinicians may eagerly switch to a hypofractionated regimen as their new standard, others may choose to do it on a case-by-case basis, such as for patients who have minimal baseline genitourinary symptoms (because those patients are less likely to develop late genitourinary toxicity than their highly symptomatic counterparts).

Although the data can be read either way, in the short term, things may segregate by whether a nation is on a bundled-payment system, in which case the CHHiP and PROFIT trials will convince many to adopt 60 Gy in 20 fractions immediately, or, as in the United States, there is a fee-for-service model, where concern for the potential increase in late toxicity seen in RTOG 0415 and HYPRO will likely lead to a more cautious approach to moderate fractionation. ■

In men with low-risk prostate cancer, the efficacy of 70 Gy in 28 fractions over 5.6 weeks is not inferior to 73.8 Gy in 41 fractions over 8.2 weeks, although an increase in late [gastrointestinal]/genitourinary adverse events was observed in patients treated with [hypofractionated...

May
12
Today In Oncology