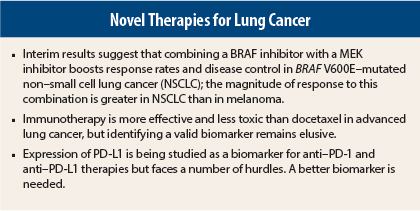 Immunotherapies are moving into first-line studies and combination studies. These drugs are changing how we treat lung cancer.

The newer targeted therapies and immunotherapies have proven to be a boon to the treatment of lung and other cancers, but how best to deploy those therapies remains a burning question. Another important focus of current research is the identification and validation of biomarkers for these therapies.

Interim results of the combination arm of an ongoing phase II study suggest that combining the BRAF inhibitor dabrafenib (Tafinlar) with the MEK inhibitor trametinib (Mekinist) improves results obtained with dabrefenib alone in patients with BRAF V600E–mutated NSCLC, making this combination of interest to pursue in this setting.1 Bruce Johnson, MD, of Dana-Farber Cancer Institute, originally presented these data at the Annual Meeting.

Speaking at the Best of ASCO meeting in Boston, Dr. Gandhi noted that previously presented data from the dabrafenib monotherapy arm of this trial focused on 84 patients with BRAF-mutated NSCLC. With dabrafenib alone, the response rate of 32% was not as high as with other epidermal growth factor receptor (EGFR) therapies, Dr. Gandhi pointed out. The rate of stable disease was 24% with dabrefenib monotherapy, for an overall disease control rate of 56%.

In the combination arm, the addition of trametinib to dabrafenib in a small group of 24 patients evaluable for response doubled the response rate to 63% and increased the disease control rate to 88%.

“We see the added benefit of trametinib in both lung cancer and melanoma, with a more marked improvement in response rate for lung cancer compared with melanoma,” Dr. ­Gandhi told listeners. “Currently, this same study in BRAF-mutated lung cancer is evaluating dabrafenib and trametinib as first-line therapy.”

Turning to immunotherapy with inhibitors of programmed cell death protein 1 (PD-1) and its ligand (PD-L1) in NSCLC, another abstract looked at the efficacy, safety, and predictive biomarker results from the POPLAR study—a randomized phase II trial of atezolizumab (formerly known as MPDL3280A, an anti–PD-L1 agent) vs docetaxel as second- or third-line therapy of advanced NSCLC.2 The POPLAR results were presented by Alexander I. Spira, MD, PhD, of Virginia Cancer Specialists Research Institute, Fairfax, at the Annual Meeting.

“A high mutational load, as is frequently seen in NSCLC, may contribute to increased immunogenicity, so targeting PD-1 and PD-L1 may be beneficial,” Dr. Gandhi explained.

Several studies suggest that anti–PD-1 and anti–PD-L1 strategies are effective in lung cancer. The randomized, open-label, global CheckMate 017 trial found that nivolumab (Opdivo) was superior to docetaxel in 272 patients with advanced squamous cell NSCLC in whom platinum-containing doublet chemotherapy had failed, increasing median overall survival from 6 months to 9.2 months (P = .00025).3 This study, which was presented at the Annual Meeting by David R. Spigel, MD, of Sarah Cannon Research Institute/Tennessee Oncology, Nashville, led to U.S. Food and Drug Administration approval of nivolumab in NSCLC.

The authors of CheckMate 017 collected tumor biopsies to quantify PD-L1 expression in hopes of identifying a biomarker for response. More than 40% of patients had > 1% PD-L1 expression with the assay used in this study.

An identically designed trial, CheckMate 057, presented at the Annual Meeting by Luis Paz-Ares, MD, PhD, of Hospital Universitario 12 de Octubre in Madrid, showed the same encouraging trend toward improved survival for nivolumab over docetaxel in nonsquamous NSCLC.4 In CheckMate 057, PD-L1 expression was correlated with benefit from nivolumab, with nivolumab showing improved efficacy at all cutoff points for expression (ie, 1%, 5%, and 10%).

“The follow-up of all three trials is short, but the differences to date in survival are significant,” Dr. Gandhi commented. “In addition, all three studies have shown that there is a striking difference in toxicity favoring checkpoint inhibitors over standard therapy. This pushes us toward using these drugs. With the addition of nivolumab as a second-line option in updated National Comprehensive Cancer Network (NCCN) guidelines, PD-1 inhibition has become a new standard of care,” she noted.

The saga of validating PD-L1 expression as a biomarker of benefit from anti–PD-1 and anti–PD-L1 therapies continues, with some studies suggesting that this is a useful biomarker and others being equivocal. Complicating this issue is the observation that PD-L1–negative patients also derive benefit from immunotherapy.

Dr. Gandhi said high levels of PD-L1 expression also appear to separate out patients who will respond to treatment with another anti–PD-L1 agent, pembrolizumab (Keytruda).5

“The real difference in response [with atezolizumab and pembrolizumab] is seen only at high levels of PD-L1 expression. High levels of expression were not evaluated with nivolumab,” she noted.

“PD-L1 is not a perfect biomarker, but it does differentiate patients who will and won’t respond to some degree. PD-L1 expression is a better predictor than histology and smoking status, and it correlates with differences in outcome,” Dr. Gandhi continued.

The problems with measuring PD-L1 status are partly related to the use of different assays, different antibodies, different cutoff points, fresh vs archival tissue, heterogeneity between multiple tumors and multiple sampling within a tumor, interval between biopsy and treatment, and specimens from primary vs metastatic disease.

“These differences make it difficult to predict using PD-L1 status. Levels of expression do not predict which patients will not benefit from therapy, but don’t throw out the baby with the bathwater. That is, don’t discount using a biomarker in decision-making for anti–PD-1 therapy,” she told the audience.

“PD-L1 expression is a dynamic biomarker, it can change over time with exposure to therapy, and it is harder to pin down to a rigid range of sensitivity. We need to identify the best assay and the best immune biomarker. Then we need to refine how to use that biomarker,” Dr. Gandhi continued.

She said that the NCCN has included nivolumab for the treatment of squamous cell and non–squamous cell NSCLC but states that PD-L1 expression should not be used to select patients. “I think it’s premature for the NCCN to state that. We need more data,” she said.

“Immunotherapies are moving into first-line studies and combination studies. These drugs are changing how we treat lung cancer,” she concluded. ■