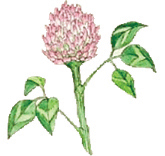 The ASCO Post’s Integrative Oncology series is intended to facilitate the availability of evidence-based information on integrative and complementary therapies commonly used by patients with cancer. We chose red clover for this issue because of its popularity among breast cancer patients.

Red clover is a perennial herb that commonly grows in meadows in Asia and Europe, and is now prevalent in North America as well. It produces dark pink flowers in thick inflorescences that are used in herbal medicine.

Red clover has been used in traditional medicine to treat skin disorders such as psoriasis and eczema, cough, and mastitis. It was also valued as a blood purifier and used as a folk treatment for cancer. It is an ingredient in some “alternative” (nonviable) cancer treatments such as Hoxsey therapy.

Red clover is available in the form of teas, tinctures, tablets, and capsules, as an ointment for topical application, and as extracts standardized to specific isoflavones. Two heavily promoted extracts include Promensil, for the treatment of menopausal symptoms, and Trinovin, for prostate health.

Patients with breast cancer should avoid red clover because it may stimulate proliferation of estrogen receptor (ER)-positive breast cancer cells.

Red clover extract acts as an estrogen agonist and stimulates proliferation of ER-positive breast cancer cells in vitro.1 However, biochinin A, a red clover isoflavone, inhibits aromatase activity and expression,2 and may confer a protective effect.

Red clover isoflavones may reduce bone loss12 and improve arterial compliance, an index of the elasticity of large arteries, an important risk factor for cardiovascular disease.13 However, red clover was shown to increase resistance of prostate cancer cells to high dose radiation, and prevent the growth of normal prostate cells.14

In summary, red clover appears useful in alleviating menopausal symptoms, but there are no data to support its anticancer effects.

Methotrexate: Concurrent use of red clover with methotrexate injections resulted in severe vomiting and epigastric pain.18 ■