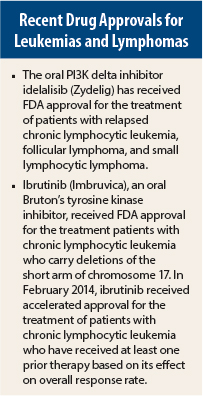 “[Idelalisib] is a much needed new treatment option for appropriate patients with [chronic lymphocytic leukemia] and these indolent lymphomas who have experienced relapses and have limited, if any, treatment options,” said Bruce Cheson, MD, Professor of Medicine, Head of Hematology and Director of Hematology Research at Lombardi Comprehensive Cancer Center at Georgetown University, and a Principal Investigator on the pivotal phase III trial of idelalisib in chronic lymphocytic leukemia.1

Idelalisib is being granted traditional approval to treat patients with relapsed chronic lymphocytic leukemia. Used in combination with rituximab ­(Rituxan), idelalisib is to be used in patients for whom rituximab alone would be considered appropriate therapy due to other existing comorbidities. Idelalisib is the fifth new drug with Breakthrough Therapy designation to be approved by the FDA and the third drug with this designation approved to treat chronic lymphocytic leukemia.

The FDA is also granting idelalisib accelerated approval to treat patients with relapsed follicular B-cell non-Hodgkin lymphoma and relapsed small lymphocytic lymphoma. Idelalisib is intended for use in patients who have received at least two prior systemic therapies.

The FDA is approving idelalisib to treat follicular lymphoma and small lymphocytic lymphoma under the agency’s accelerated approval program, which allows approval of a drug to treat a serious or life-threatening disease based on clinical data showing the drug has an effect on a surrogate endpoint reasonably likely to predict clinical benefit to patients. This program provides earlier patient access to promising new drugs while the company conducts confirmatory clinical trials.

Idelalisib carries a Boxed Warning alerting patients and health-care professionals of fatal and serious toxicities including liver toxicity, diarrhea, colitis, pneumonitis, and intestinal perforation that can occur in idelalisib-treated patients. The drug is also being approved with a Risk Evaluation and Mitigation Strategy (REMS) comprising a communication plan to ensure health-care providers who are likely to prescribe idelalisib are fully informed about these risks.

The FDA also expanded the approved use of ibrutinib (Imbruvica) to treat patients with chronic lymphocytic leukemia who carry deletions of the short arm of chromosome 17, which are associated with poor responses to standard treatment for the disease. Ibrutinib received a Breakthrough Therapy designation for this use.

The FDA is also approving new labeling to reflect that ibrutinib’s clinical benefit in treating chronic lymphocytic leukemia has been verified. In February 2014, ibrutinib received accelerated approval for the treatment of patients with chronic lymphocytic leukemia who have received at least one prior therapy based on its effect on overall response rate. New clinical trial results examining progression-free survival and overall survival have confirmed the drug’s clinical benefit.

The FDA reviewed ibrutinib’s application for this new use under the agency’s Priority Review program, which provides for an expedited review of drugs that are intended to treat a serious disease or condition and, if approved, would offer significant improvement compared to marketed products. Ibrutinib’s new use is being approved more than 2 months ahead of the product’s prescription drug user fee goal date of Oct. 7, 2014.

“In less than a year, we have seen considerable progress in the availability of treatments for chronic lymphocytic leukemia,” said Richard Pazdur, MD, Director of the Office of Hematology and Oncology Products in the FDA’s Center for Drug Evaluation and Research. “We continue to see advances in the availability of therapies to treat chronic lymphocytic leukemia, especially for difficult-to-treat patients populations.”

The FDA approved obinutuzumab (Gazyva) in November 2013, ibrutinib (Imbruvica) in February 2014, and a new use for ofatumumab (Arzerra) in April 2014 to treat chronic lymphocytic leukemia. Both obinutuzumab and ofatumu­mab also received Breakthrough Therapy designation for this indication. Like the other two drugs, idelalisib was also granted Orphan Drug designation because it is intended to treat a rare disease.

Disclosure: Dr. Cheson was Principal Investigator for the pivotal trial of idelalisib and has received honoraria from Gilead Sciences. Dr. Pazdur reported no potential conflicts of interest.