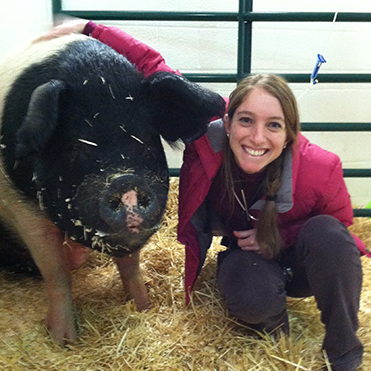 Doctors at Cornell University Hospital for Animals in Ithaca, New York, reported what they believe may be the first case of a pig being treated for lymphoma. The animal was described as a 730-pound black-and-white Hampshire pig that was diagnosed with presumptive B-cell lymphoma.

The 4-year-old pig, called “Nemo,” was brought to the Cornell Hospital for Animals by his owner after becoming ill earlier this year.

The pig became a teaching case for veterinary oncologists at the University Hospital for Animals, undergoing a novel care plan and paving the way to combat cancer in large animals. Clinicians worked to prepare for intravenous medication delivery. In the first such procedure ever done to treat a sick pig, surgeon Jim Flanders, DVM, who had performed similar procedures in smaller animals, joined large-animal surgeon Susan Fubini, DVM, to surgically implant a vascular access port.

The two doctors ran a catheter up a vein in the pig’s neck to a port behind his ear, creating a route for delivering drugs where they would be most effective while minimizing harm. Resident Emily Barrell, DVM, selected and delivered the chemotherapeutic drugs.

“Although lymphoma has been documented in swine, there aren’t any documented cases of pigs being treated for it,” said Cornell hospital oncologist Cheryl Balkman, DVM. “We adapted a treatment plan based on what we know is effective in dogs, cats, and humans with lymphoma,” Dr. Balkman said.

The pig’s clinical signs soon resolved, and he has continued to do well during long-term treatment. Though little is known about the prognosis for pigs with cancer, this one case has offered veterinarians valuable information for helping large animals. Nemo continues to reside at Cornell’s Hospital for Animals. ■