Three randomized controlled trials presented at the 2010 Annual Meeting of the American Society of Hematology (ASH) suggested that treating multiple myeloma with lenalidomide (Revlimid) increased the risk of second primary malignancies; of particular concern is transformation to acute myeloid leukemia or myelodysplastic syndromes.1-3 At the ASCO Annual Meeting in June, additional studies that explored this issue suggested that the risk of second primary malignancies in this setting is low and the benefits of lenalidomide seem to outweigh the risks, but a number of questions remain unresolved.

“Currently, we lack clear answers as to which patients will develop second primary malignancies after myeloma,” said Ola Landgren, MD, PhD, Chief of the Multiple Myeloma Section at NCI and formal discussant of the three papers at the ASCO meeting. “We lack clear answers due to small numbers of patients in these studies and limitations of the study designs. We have to discuss benefits vs risks with patients, but there are no clear data to guide us at this time. A concerted effort is needed to characterize the molecular features of patients who develop second primary malignancies after myeloma.”

The continuous lenalidomide arm (arm 1) achieved a significant and “unprecedented” improvement in progression-free survival (median = 31 vs 13 months, respectively; 60% reduced risk of progression; P < .001). Progression-free survival was even more impressive in patients aged 65 to 75 years (69% reduced risk of progression; P < .001). However, no difference in 5-year survival was seen among the three arms. Presenting author of this paper, Antonio Palumbo, MD, University of Torino, Italy, said that with longer follow-up, a survival difference may emerge.

Dr. Palumbo emphasized that the risk of second primary malignancies, although increased by the concomitant use of lenalidomide and melphalan, is low and that the benefit-risk profile strongly favors the use of continuous lenalidomide for newly diagnosed patients. 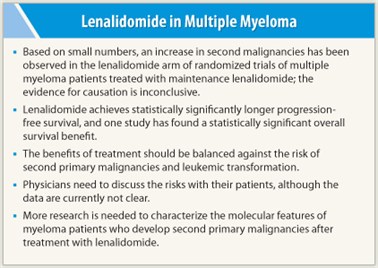 MM990/010 was a pooled analysis of two phase III studies with a total of 704 patients with relapsed/refractory multiple myeloma treated with lenalidomide plus dexamethasone or placebo plus dexamethasone until disease progression.6

The incidence of second primary malignancies was low and similar to the background incidence of similarly aged persons in the general population. However, overall survival was significantly longer in the group treated with lenalidomide plus dexamethasone, and improvement persisted with long-term follow-up. ■

Formal discussant Ola Landgren, MD, PhD, Chief of the Multiple Myeloma Section at NCI, had some additional comments about the 2011 ASCO presentations on second primary malignancies in lenalidomide-treated patients.1 He said that the reporting of second primaries has several limitations that...