Rising Costs of Cancer Care: It's More Than Drugs

All parties—the government, payers, and consumers—agree that, left unchecked, rising health-care costs will eventually hamstring vital portions of our delivery system. For example, Medicare, which covers more than 50% of the nation’s patients with cancer, is marching headlong toward insolvency. Largely due to sticker-shock prices of some newer therapeutics, oncology is in the spotlight of the health-care spending debate. In an occasional series of articles, The ASCO Post will look at oncology costs and how to reduce spending without hampering the quality of care.

Put simply, health-care spending is calculated as units of care multiplied by their respective costs. While numerous studies indicate that more services do not necessarily result in better outcomes, determining the true clinical value of health services—especially in a complex disease like cancer—is where much of today’s debate begins and ends.

While it is true that oncology costs are rising at an unsustainable rate, it is important to weigh costs against outcomes. For instance, a study led by Aman Buzdar, MD, FACP, Professor of Breast Medical Oncology, The University of Texas MD Anderson Cancer Center, Houston, looked at survival data for nearly 57,000 patients with breast cancer from 1944 to 2004 and calculated 10-year survival rates. Dramatic improvements were seen in local, regional, and metastatic disease. Among women with regional disease from 1944 to 1954, only 16.2% of women were still alive 10 years later, compared with 74% in the most recent decade analyzed, from 1995 to 2004.

Naturally, improvements over the past decades in breast cancer survival are due to a number of factors, including earlier diagnosis and better surgical techniques. However, increased use of expensive chemotherapies and biologics in the adjuvant and metastatic setting also play a role in increased survival rates. Much lay press coverage on this subject gives particular attention to high-priced agents, which obscures the discussion over rising costs. Policymakers intent on reducing cancer care spending need a more nuanced appreciation of the clinical value of oncology treatments, from diagnosis to death.

The Gray Area of Costs

The ASCO Post asked health-care policy expert, Peter B. Bach, MD, MAPP, Director of the Center for Health Policy and Outcomes at Memorial Sloan-Kettering, whether overutilization of services is a main driver of rising costs. “For obvious reasons, cancer spending gets singled out because the unit-of-care prices are so transparent. The challenge with aggregate data on the macro level is that it is difficult to figure out which services are actually needed, which services are unnecessary, and which services we could pay less for,” said Dr. Bach.

He said that overutilization is one hypothesis for the upward spending trend. “But the cost issue is grayer than that. Of course we overuse services. The classic example is third- and fourth-line cancer agents in clinical scenarios where cure or even prolonging life is not viable,” said Dr. Bach. “But the unit pricing of our health care is also a factor. For example, we pay much more per unit of care, such as hospital days, than Western European countries, and in some regard with no better outcomes,” he added. 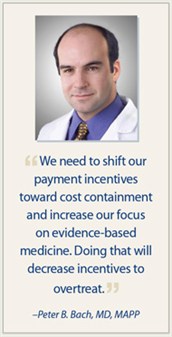 Dr. Bach stressed that constraining oncology spending is a huge challenge, one that requires a multipronged approach. “Among other things, we need to shift our payment incentives toward cost containment and increase our focus on evidence-based medicine. Doing that will decrease incentives to overtreat,” said Dr. Bach.

According to Dr. Bach, a partial solution is to shift the incentives created by our current fee-for-service system, which reimburses each separate element of care, to an episode-based model that combines the collective costs of care into a single payment. Although Medicare has used episode-based payment models in a limited fashion, and the concept has been explored in certain chronic diseases such as diabetes, the complexity of cancer presents difficult challenges.

In a recent paper published in Health Affairs,1 Dr. Bach and colleagues proposed an episode-based pilot for Medicare using metastatic lung cancer as their model, proffering that oncology is compatible with episode-based payments because it is evidence-based and employs updated guidelines in codifying standard care, providing opportunities for both savings and quality control.

According to the proposal by Dr. Bach and coauthors, participating oncologists would receive an episode-based payment for drugs and administration costs and would agree to use regimens accepted by the Centers for Medicare & Medicaid Services. The pilot would be divided into a traditional fee-for-service model followed by an episode-based phase. “Physicians would submit information from both phases. The first phase would document individual services; the second, a new claim code, would define the episode,” explained Dr. Bach.

Phase 1 fee-for-service claims would be used to determine the average cost of the episode of care, and Medicare would then shift to providing a single payment based on that average. A central feature of episode-based payment in this clinical scenario is the creation of incentives for oncologists to select lower-priced therapies from the choices judged equally appropriate.

Dr. Bach pointed out that along with the obvious savings associated with using lower-cost regimens, adoption of an episode-based payment model could have the added fiscal benefit of pressuring drug manufacturers to reduce their prices, lowering costs within providers’ budgets. “We believe that our proposal has strong potential to serve as a stepping-off point toward comprehensive payment reform in oncology,” said Dr. Bach.

Researchers at RTI International, Emory University in Atlanta, and the Centers for Disease Control and Prevention found that although over the past 2 decades medical costs for treating cancer have nearly doubled, the main driver for the increased costs is the growing number of cancer cases, not treatment.2

“The number of cancer cases has increased proportionately more than medical expenditures, indicating that the increase in the cost of treating cancer has been driven mainly by the increase in the number of cases and not by the cost per treated cancer case,” coauthor Justin Trogdon, PhD, told The ASCO Post. He added that early detection and enhanced prevention are sound strategies for addressing the upcoming cancer population problem.

In an interview with The ASCO Post, Robin Yabroff, PhD, MBA, an epidemiologist in the Health Services and Economics Branch of NCI, concurred that our population was a major driver of cancer care spending. “The U.S. population is aging and growing, which has a major influence on the rising costs of cancer care. A higher absolute number of newly diagnosed patients with cancer along with longer survival rates is going to play a large role in cancer trends and their related costs,” said Dr. Yabroff.

Dr. Yabroff commented that parsing the exact drivers of costs is difficult. However, her studies have shown that costs of hospitalizations and greater use of surgery and adjuvant therapy among the elderly are also contributors. “The larger number of patients with cancer is a trend that we can comfortably predict as continuing and a future driver of cancer care costs. There’s more uncertainty about how treatment trends will impact the costs of care in the future,” said Dr. Yabroff.

It is projected that in 2011, health-care spending in the United States will cost approximately $2.7 trillion, accounting for almost 18% of our gross domestic product (GDP). We spend more per person and a greater proportion of GDP on health care than any other country. Cancer care costs are about 5% of our total health-care spending, and although we have seen major advances in treatments and survival rates over the past several decades, if the escalating growth in oncology spending remains unchecked, it will contribute to the greater ills and insolvency facing vital parts of our delivery system.

Finding value within the multiple layers of our cancer care delivery system is an enormous challenge that requires honest examination of which therapeutic strategies provide the best, most cost-effective outcomes. Studies have shown that although the quantity and costs of services and drugs have increased at disquieting rates, it is the sheer number of new cases and longer survival rates of patients with cancer that are the main drivers of burgeoning spending.

Expenditures will be of even greater concern as the baby boomer population begins swelling the already financially stressed Medicare program in 2011. Identifying and understanding the drivers of costs help policymakers and health-care experts wrestle with possible solutions. ■