Evaluating Risk for Suicide in People Diagnosed or Living with Cancer

The challenges of life-threatening physical illness can sometimes lead to suicide. In fact, given the critical stressors that a person with cancer faces, we might expect suicide to be a more common reaction. Patients with cancer are at increased risk of completed suicide, though the prevalence of suicidal ideation among these individuals is equivalent to that seen in the general population.1 A review of Surveillance, Epidemiology, and End Results (SEER) data found 0.2% of patients diagnosed with cancer committed suicide, most within the first year after diagnosis. Suicidal risk appears to peak in the first month after diagnosis2 and may remain high for a few months thereafter.

Suicide is significantly increased in male patients with respiratory cancers.3 Older adults have the highest rate of suicide compared with any other age group. Given the increasing numbers of older people being diagnosed with cancer, we are likely to see an upturn in those at risk for suicide. Several studies have shown that suicide among older patients with cancer is higher than in patients with other medical illnesses, after controlling for psychiatric illness and risk of dying within a year.4‑7

The presence of a physical condition is a risk factor for suicidal behavior even in the absence of mental disorder or when controlling for depressive illness and alcohol use.8,9 The risk is increased with the number of physical ailments.

Suicidal ideation is frightening and upsetting for the patient, the family, and the oncology team members. Often suicidal thoughts may be considered a potentially treatable coping response, but one that needs to be identified and addressed in a timely manner. Though suicidal ideation may be prevalent among patients with cancer,10 it is not usually a sign of imminent harm. Understanding the identifiable risk factors and interventions to prevent bad outcomes are important for oncologists, oncology nurses, consultants, and ancillary services participating in oncology treatment, including social workers, physical and occupational therapists, and nutritionists.11 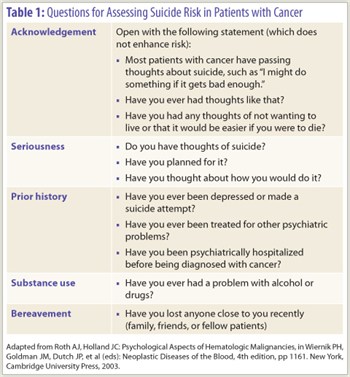 Some propose screening specifically for suicidal ideation, as distinct from general depressive symptoms. Passive thoughts of wanting to die may occur quite frequently, particularly in the setting of advanced physical disease, and may serve as a mechanism of control over fears of an uncertain future of suffering based on worst case scenarios that come to mind when people think of cancer-related deaths. It is not unusual for people to think in a conditional manner, especially when they are not very debilitated, “If the pain gets bad enough, I will end my life,” or “If I start to lose my faculties I would want to die.”

Suicidal statements may reflect an offhand comment resulting from frustration or disgust with a treatment course: “If I have to have one more MRI this year, I’ll kill myself.” However, an indication of significant despair may also be heard: “I can no longer bear what this disease is doing to all of us; I feel like such a burden. I think everyone would be better off without me.” Exploring the seriousness of the thoughts is imperative.

Table 1 lists questions for assessing suicidal ideation in patients with cancer. It is important to ask if the patient has made a definite plan. Is the patient stockpiling medication? Does he or she own or have access to a weapon?

There are several important predictors of suicide risk (Table 2), including psychological and medical variables: history of a psychiatric disorder, particularly depression or substance abuse; recent bereavement; few social supports; poorly controlled pain; advance stage of disease with debilitation; mild delirium with poor impulse control; and hopelessness or helplessness in the context of depression. Addressing the medical and psychiatric variables with commitment to therapy may reduce suicidal ideation and risk. If the patient is actively suicidal, a 24-hour companion should monitor the patient’s behavior. 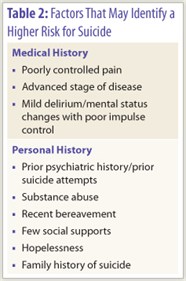 Bolund12 reports that fully half of all Swedish cancer suicides had previously conveyed suicidal thoughts or plans to their relatives. In addition, many of the completed cancer suicides had been preceded by an attempted suicide. This is consistent with the statistics for suicide in general, which show that a previous suicide attempt greatly increases the risk of completed suicide.13-15 A family history of suicide is of increasing relevance in assessing suicide risk.

Patients with advanced illness are at highest risk, perhaps because they are most likely to have such complications as pain, major depression, delirium, and deficit symptoms. Suicidal ideation has also been reported as an uncomfortable activating, disinhibiting, or depressive side effect of medications that may be prescribed for patients with cancer, including antidepressants,16 steroids, opioids, benzodiazepines, asthma medications, interferon, and hypnotics. This does not mean we should limit the use of these medications, but we should provide appropriate information and follow up.

Psychiatric disorders are frequently present in hospitalized patients who are suicidal.17,18 Farberow and colleagues19 reported that 86% of suicides occurred in the preterminal or terminal stages of illness, despite greatly reduced physical capacity. Poor prognosis and advanced illness usually go hand-in-hand. It is thus not surprising that in Sweden, those who were expected to die within a matter of months were the most likely to commit suicide.

Uncontrolled pain in patients with cancer is a dramatically important risk factor for suicide. In several studies, the vast majority of cancer-related suicides were committed by patients with severe pain, which was often inadequately controlled and poorly tolerated.12,20

Depression is a factor in 50% of all suicides. Approximately 25% of all patients with cancer experience severe depressive symptoms, including major depression.21,22 Among those with advanced illness and progressively impaired physical function, symptoms of severe depression rise to 77%.23

A sense of helplessness in the face of illness is an important factor in suicide vulnerability.25 Helplessness and a loss of control may be induced by symptoms or deficits due to the illness or its treatments, as well as the excessive need on the part of some patients to be in control of all aspects of living or dying. Being left to face illness alone may create a sense of isolation and abandonment that also leads to the development of hopelessness.

It is not uncommon for illness-related events to induce a great sense of helplessness even in those who are not typically controlling individuals. Impairments or deficits induced by the patient’s illness or its treatments often include loss of mobility, paraplegia, loss of bowel and bladder function, amputation, aphonia, sensory loss, and inability to eat or swallow. Most distressing to patients is the sense that they are losing control of their minds, especially when they are confused or sedated by medications. The risk of suicide is increased in patients with such physical impairments, especially when accompanied by psychological distress and disturbed interpersonal relationships due to these deficits.20

The management of a patient with cancer who is suicidal is based on the following goals: developing and maintaining a supportive relationship and trustworthy communication; assessing the risk and status of suicidal ideation, intent, and plan to hurt oneself; and offering the patient a sense of control by helping him or her to focus on that which can be controlled. Moreover, it is essential to convey the attitude that much can be done to improve the quality, if not the quantity, of life. Thus, it is important to actively treat the symptoms of pain, nausea, insomnia, anxiety or restlessness, depression, confusion, and fatigue. ■

6. Rosenfeld B, Breitbart W, Stein K, et al: Measuring desire for death among patients with HIV/AIDS: The schedule of attitudes toward hastened death. Am J Psychiatry 156:94-100, 1999.