In higher-risk myelodysplastic syndromes (MDS), a global phase II open-label study found that the combination of pevonedistat plus azacitidine was associated with a trend toward improved event-free survival and numerically longer overall survival, as compared with azacitidine alone, according to Lionel Ades, MD, PhD, of the Hôpital Saint-Louis, Paris.1

Dr. Ades noted the need for novel therapies that can be combined with azacitidine for patients with higher-risk MDS, chronic myelomonocytic leukemia (CMML), or low-blast AML ineligible for high-intensity therapy or transplant. “Attempts to enhance azacitidine’s efficacy by adding other agents have been limited by premature discontinuation or dose adjustments due to increases in adverse events,” he added.

Treatment with pevonedistat, the first small-molecule inhibitor of the NEDD8-activating enzyme, disrupts cell-cycle progression and survival. In AML, the drug has shown encouraging activity and tolerability in combination with azacitidine, Dr. Ades said.

The global phase II randomized, open-label study included 120 patients with higher-risk MDS (56%), low-blast AML (30%), and higher-risk CMML (14%) or who had not received a hypomethylating agent and were ineligible for allogeneic stem cell transplant. Patients were randomly assigned to pevonedistat at 20 mg/m2 on days 1, 3, and 5 plus azacitidine at 75 mg/m2 on days 1 to 5, 8, and 9 or azacitidine on the same schedule, repeated every 28 days. Study endpoints were event-free survival (time to death or transformation to AML in higher-risk MDS/CMML or death in low-blast AML), overall survival, and objective response rate. 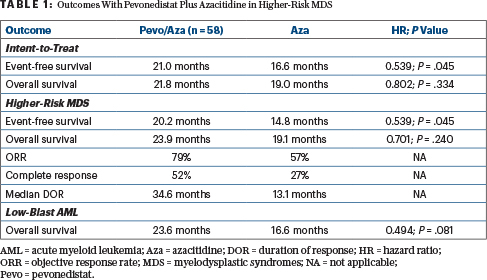 Analysis of patients with higher-risk MDS by prespecified subgroups showed the benefit of the combination in patients whose risk was deemed “very high” or “high” by the International Prognostic Scoring System Revised version. For these subsets as well as for patients with low-blast AML, the combination was effective in patients harboring poor-risk mutations, reported Dr. Ades.

Response rates in the higher-risk MDS subgroup were increased with the combination over azacitidine alone: 79% vs 57%, with complete responses seen in 52% and 27%, respectively. The median duration of response in these responders was 34.6 vs 13.1 months.

For patients with higher-risk MDS who were red blood cell transfusion–dependent at baseline, transfusion independence was achieved by 69.2% with the combination and 50.0% with azacitidine alone.

In the CMML subgroup, pevonedistat/azacitidine did not appear to improve efficacy over azacitidine alone, but the size of this subgroup precluded meaningful conclusions, according to Dr. Ades. In these smaller subsets of low-blast AML and higher-risk CMML, there was less of a difference in response rates.

Quality of Life and Safety

No differences between treatment arms were found in terms of quality of life. “Similar scores were maintained from study entry to the end of treatment,” Dr. Ades added.

DISCLOSURE: Dr. Ades has served as a consultant or advisor to and received research funding from Takeda, Celgene, and AbbVie.

“Although the hypomethylating agent azacitidine represents a standard of care for higher-risk myelodysplastic...