Lost in Translation: A Fisherman’s Tale 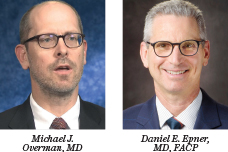 The ASCO Post is pleased to reproduce installments of the Art of Oncology, as published previously in the Journal of Clinical Oncology. These articles focus on the experience of suffering from cancer or of caring for people diagnosed with cancer, and they include narratives, topical essays, historical vignettes, poems, and photographic essays. To read more, visit ascopubs.org.

At The University of Texas MD Anderson Cancer Center, many international patients are first evaluated by a general medical oncologist (DEE) and then referred to a subspecialist medical oncologist (MJO) for treatment. This essay describes experiences both authors had with this patient.

Mr. B was a 76-year-old man from Kuwait with a history of rectal bleeding and progressive fatigue for several months. He had worked as a carpenter and welder his entire life and was an avid fisherman in his spare time. Blood work in Kuwait revealed severe anemia, and colonoscopy detected a large rectal mass, the biopsy of which confirmed adenocarcinoma. Staging computed tomography (CT) in Kuwait showed a 10 × 5 cm rectal mass that involved the bladder and seminal vesicles (T4 primary). He received 3 units of red blood cells and then traveled to the United States with his brother and son for evaluation and treatment.

A repeat CT in our clinic confirmed locally advanced rectal cancer, and blood work demonstrated moderate anemia. He did not take any regular medications and had no significant medical history. As I (DEE) viewed the CT images of his extensive primary tumor, I realized his treatment would be complex and potentially risky. In addition, obtaining informed consent for a complex, multimodality treatment would be involved, given an Arabic interpreter would serve as an intermediary.

As I (DEE) approached the exam room, the Arabic interpreter stopped me in the hallway to warn me that Mr. B’s family did not want us to tell him he had cancer.

Little did I know that I faced a much greater challenge. The Arabic interpreter explained the situation was a bit more complicated: Mr. B had been deaf and mute since birth.

“Well, then let’s communicate by writing,” I suggested.

“Good idea,” the interpreter said, “but that won’t work either, since Mr. B can neither read nor write.”

“No,” the interpreter said. “He communicates with his family members through a rudimentary homemade sign language.”

The reality began to sink in. To communicate with Mr. B, I would have to talk to the Arabic translator, who would talk to Mr. B’s son, who would then sign to the patient. I would have no way of knowing what his son was telling him or how successful he was in getting the point across. How could his son possibly communicate concepts such as “pelvic exenteration,” “colostomy,” or “chemoradiotherapy” with this rudimentary sign language? I realized informed consent in the traditional sense would be impossible. How could I treat this man—no matter how much I wanted to help him—if he would not understand risks and benefits of treatment? I took a deep breath and entered his room.

The Power of Nonverbal Communication

Despite his illness, Mr. B looked strong and healthy. He had the deep tan and solid build of a man who had spent his life working outdoors. I extended my hand, and he shook it with startling power. He had bright and engaging eyes. I felt his vitality and presence immediately. He sized me up quickly. He seemed to sense a hint of concern in my face, and he used his big smile and enthusiasm to put me at ease. I bonded with him immediately. How ironic that this vulnerable patient from a far-off land and culture was trying to put his doctor at ease. He was doing what he had done so skillfully throughout his 76 years: namely, bonding with those around him nonverbally.

As I sat there in Mr. B’s room letting the reality of the situation sink in, I was perplexed as to how this man had gotten through life. Mr. B’s son explained he had worked most of his life alongside his uncle as a carpenter and welder. His uncle had acted as Mr. B’s spokesperson, demonstrating what he needed to do, and had used the same sign language they used at home. Here was a man who could not hear, speak, read, or write and yet who had raised six children and worked in construction his entire life. I concluded he must be extraordinarily intelligent, perceptive, and determined. 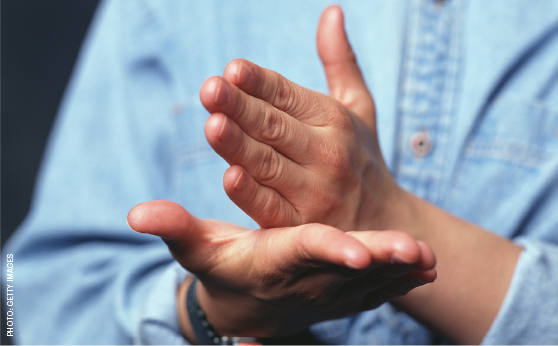 The signs Mr. B and his family used were simple. Tapping the vein in his arm, to mimic the location of a possible peripheral intravenous medication, meant “doctor.” When his son extended his arm forward from his mouth, it meant “vomiting.” When his son needed to explain something that required more than one hand signal, he hit his shoulder as a transition. The sign for “fishing” was swaying his arm back and forth from left to right. I soon learned he was a passionate fisherman, so he used this sign with great enthusiasm whenever the opportunity arose.

I decided to test Mr. B’s level of comprehension and tried to establish rapport by using the oldest fishing joke in history. I held my hands up in front of me, palms facing each other three feet apart and told him, “I went fishing the other day. You should have seen the one that got away.” He nearly fell off his chair with laughter and moved my hands about 10 inches apart to indicate the actual size of the fish. Mr. B sat across from me smiling and perceptively following the discussion closely. As foreshadowed by the interpreter, his son cautioned me that Mr. B did not yet know his diagnosis and that the family did not want him to know. I was amused by this request, given it seemed I could not have told Mr. B his diagnosis, or anything else, without his son’s assistance. His son seemed to control all information.

The family had told Mr. B that he had traveled to our clinic to treat severe external hemorrhoids, but I thought it highly unlikely that Mr. B really believed he had traveled halfway across the world for hemorrhoid treatment. He obviously understood he was there to take care of a much more serious issue. Yet, despite his innate intelligence and perceptiveness, I realized we were both in uncharted territory. I would need to somehow navigate these dangerous waters by helping him understand his diagnosis and treatment options without causing him unnecessary emotional distress. In addition, I would have to do so through an Arabic interpreter serving as intermediary with his family, which would then communicate with Mr. B by using a rudimentary homemade sign language that did not yet have signs for most medical concepts, let alone complex ones.

Please Don’t Tell My Father He Has Cancer

When his son requested nondisclosure, I explored the concern, which was that finding out about the cancer would be emotionally traumatic for Mr. B and would cause him to lose the desire to fight his illness. I reassured the son that I would treat him with compassion and respect as I would a member of my own family. I did not explicitly say we would never discuss his father’s diagnosis, but I assured him we would communicate in a sensitive manner so as to maintain optimism and hope balanced with realism. His son seemed reassured and visibly relaxed.

I communicated by using visual aids such as illustrations of the anatomy of the colon and rectum. Mr. B nodded in understanding. I soon found myself using my own homemade sign language. When it came time to discuss surgery, I reclined far back in my chair as if supine and ran my index finger down the middle of my abdomen to indicate a large surgical incision. His son signed a little to clarify. Mr. B nodded in understanding. Then I acted as though I was grabbing each edge of the imaginary incision with one hand and retracting the edges to expose my internal organs. His son again signed a little, and Mr. B nodded. I finally motioned as if I was extracting a large tumor from within my pelvis and placing it in a bucket. Mr. B’s eyes lit up, and he nodded. He clearly had at least a general understanding of what I was communicating. I gained his trust with each motion of my body, each illustration, each nod of understanding. I consulted our ostomy nurse to show Mr. B and his family illustrations of colostomy bags on patients, given he would almost certainly require one in the future. She also placed a colostomy bag on Mr. B’s abdominal wall to simulate what his abdomen would look like after surgery. Nurses in the chemotherapy infusion suite and radiation department also painstakingly offered similar explanations.

Beneficence: Doing the ‘Right Thing’ for the Patient

Yet, I still wondered whether our Herculean efforts to communicate with Mr. B truly constituted informed consent. Did Mr. B fully understand his cancer diagnosis and potential risks of therapy? I discussed his findings in a multidisciplinary conference on multiple occasions, and the consensus was to offer neoadjuvant chemotherapy, then chemoradiotherapy, then pelvic exenteration with colostomy and ileal conduit. It was a treatment plan that would be a challenge to explain to even the most medically savvy English-speaking patient.

“How ironic that this vulnerable patient from a far-off land and culture was trying to put his doctor at ease.”
— Michael J. Overman, MD, and Daniel E. Epner, MD, FACP

My instincts told me Mr. B understood his situation and proposed treatment adequately enough for us to proceed. I felt treating Mr. B’s cancer was the right thing to do, even if he did not understand all the nuances. I asked one of our clinical ethicists to weigh in on the topic, and she agreed with the treatment plan on the basis of the principle of beneficence. Did Mr. B truly know what it would feel like to receive chemotherapy and radiation and undergo a pelvic exenteration? Does anyone? His life was in our hands and in his family’s hands, and he trusted us to do the right thing for him.

Throughout our lengthy meetings with Mr. B and his family, I came to appreciate the power of family bonds. Invariably, we have larger audiences than just our patients when we discuss the life-altering nature of cancer. Communication with and care of our patients must involve the families and support networks of our patients. In effect, I obtained informed consent from family members in the room with Mr. B.

In the fast-paced environment in which we practice these days, it often seems that obtaining informed consent has been reduced to a legal exchange between only the patient and the doctor. However, the consent form is merely the final step in a long process of building trust and rapport with our patients and their families. This principle extends beyond the consent process. Whether we are discussing a new diagnosis, a complicated treatment plan, postsurgery recovery needs, or end-of-life care, our patients are inseparable from their families throughout the journey.

Mr. B completed his treatment successfully, and he is now cancer-free and back home in Kuwait, enjoying his favorite pastime of fishing. My interactions with Mr. B and his family helped me better appreciate the power of the relationships we form with our patients and the crucial role our patients’ friends and families play in their cancer care. I often take my own son and daughter fishing in small ponds near our home, and as we sit in silence, my mind often returns to the fisherman from Kuwait who taught me so much. Then I tell my kids about the one that got away.