Highlights of Research in Lymphomas Presented During the EHA25 Virtual Congress

To complement The ASCO Post’s continued coverage of the virtual edition of the 25th European Hematology Association Annual Congress (EHA25 Virtual), here are a few abstracts selected from the meeting proceedings focusing on clinical research in Hodgkin and marginal zone lymphomas. 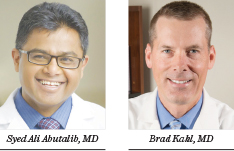 Omission of Radiotherapy in Hodgkin Lymphoma

Background: The standard of care in Germany for “GHSG-defined unfavorable disease” (Table 1) is combined-modality therapy with two cycles of eBEACOPP (bleomycin, etoposide, doxorubicin, cyclophosphamide, vincristine, procarbazine, and prednisone), plus two cycles of ABVD (doxorubicin, bleomycin, vinblastine, and dacarbazine) followed by radiation therapy (HD14 study).2 Combined-modality treatment comprising chemotherapy and consolidation radiotherapy is standard of care for patients with early-stage unfavorable Hodgkin lymphoma. However, the use of radiotherapy raises concerns about long-term sequelae in this young patient cohort. The investigators in the HD17 study asked whether radiotherapy can be omitted in patients achieving a complete metabolic response after “2+2” chemotherapy (two cycles of eBEACOPP followed by two cycles of ABVD) without loss of efficacy.

Methods: The HD17 study aimed to show noninferiority of the PET4-guided strategy in a per protocol analysis regarding progression-free survival, with a noninferiority margin of 8%.

Clinical Implications: In patients who are PET-negative (defined as Deauville score 1 or 2) after four cycles (two cycles of eBEACOPP followed by two cycles of ABVD), radiation therapy can be safely omitted. Of note, this pattern of chemotherapy administration is rarely utilized in North America. Patients receive two cycles of ABVD chemotherapy, followed by interim PET imaging, and those who are PET-negative (Deauville score 1–3) receive four additional cycles of AVD chemotherapy (bleomycin omitted) and no radiation. Patients who are interim PET-positive receive the escalated ­BEACOPP regimen followed by involved-field radiation. This strategy allows avoidance of radiation in the vast majority of patients with early-stage unfavorable Hodgkin lymphoma.

It is important to note that the definitions by the National Comprehensive Cancer Network® (NCCN®) and the European Organisation for Research and Treatment of Cancer of early-stage “unfavorable” disease are different from the definition by GHSG (Table 1). In addition, the current 2020 NCCN recommendation for such a group of patients is divided into two major categories (patients ≥ 18 years of age):

Bulky disease (defined as > 10 cm lymph node size or mediastinal mass ratio > 0.33) → ABVD × two cycles followed by an additional two to four cycles with or without radiation therapy, provided PET scan is reported as Deauville score 1 to 3. Of note, there is a lack of clarity in the number of cycles and use of radiation therapy.

Background: The anti-PD-1 antibody pembrolizumab is U.S. Food and Drug Administration (FDA)-approved for patients whose disease is refractory or has relapsed after at least three lines of therapy. Single-agent brentuximab vedotin is FDA-approved for patients after failure of autologous hematopoietic cell transplantation or after failure of at least two prior multiagent chemotherapy regimens in patients who are not candidates for hematopoietic cell transplantation.

• Serious (grade 3–5) treatment-related adverse events: About 19.6% of patients who received pembrolizumab and 25.0% of patients who received brentuximab vedotin had grade 3 to 5 treatment-related adverse events, most frequently pneumonitis (4.1%) with pembrolizumab and neutropenia (7.2%) with brentuximab vedotin. One death (grade 5) due to pneumonia occurred in a patient receiving pembrolizumab.

Clinical Implications: In the KEYNOTE-204 study, pembrolizumab demonstrated a progression-free survival benefit over brentuximab vedotin in patients with relapsed or refractory classic Hodgkin lymphoma. More patients had serious treatment-related adverse events and discontinued treatment in the pembrolizumab arm (16.2% and 8.8%, respectively) than those in the brentuximab vedotin arm (10.5% and 3.9%, respectively). Moreover, with pembrolizumab, there is a higher risk of early immune-related toxicity after allogeneic hematopoietic cell transplantation; this may be abrogated by cessation of therapy 6 weeks prior to the transplant procedure, infusion of marrow graft (instead of peripheral blood graft), and use of posttransplant cyclophosphamide as part of graft-vs-host disease prophylaxis.4-6 Table 2 outlines selected recommendations for patients with classic Hodgkin lymphoma eligible for allogeneic transplant after failure of autologous transplant receiving immunotherapy. For complete recommendations, see reference 4.

Background: Zanubrutinib, a selective and irreversible BTK inhibitor, is being tested in relapsed or refractory marginal zone lymphoma.

Methods: The study included a total of 20 patients, with extranodal disease in 9, nodal disease in 5, and splenic disease in 6. The primary efficacy endpoint is overall response rate, according to the Lugano classification. At data cutoff on January 29, 2020, with a median follow-up of 27.1 months (8.3–51.1 months), 12 patients remained on treatment.