The text and photograph on this page are excerpted from a four-volume series of books titled Oncology Tumors & Treatment: A Photographic History, by Stanley B. Burns, MD, FACS, and Elizabeth A. Burns. The photo below is from the volume titled “The X-Ray Era: 1901–1915.” The photograph appears courtesy of Stanley B. Burns, MD, and The Burns Archive. To view additional photos from this series of books, visit burnsarchive.com.

Photography’s importance in documenting historical medical events was never more evident than at the opening of a new operating room at The Johns Hopkins Hospital in Baltimore, Maryland, on October 5, 1904. Prior to this time, despite being recognized as the leading institution for medical education and advanced surgery, Johns Hopkins had been equipped with only a makeshift operating table, a relic from the 1870 Franco-Prussian War. It was so primitive that blocks had to be placed under its legs to raise or lower the head.

The opening of modern operating rooms, designed by the hospital’s master surgeons and housed in a new specialized, four-story building, was a time for rejoicing. It would herald the dawning of a new century in surgical competence and education. To commemorate this event, Surgeon-in-Chief William Stewart Halsted, MD, gathered his senior surgeons for this well-publicized operation.

At Johns Hopkins during the early 1900s, a new modern style in medical photography was initiated with the preparation of a revolutionary series of photo albums. The albums did not contain the typical large, formal, professional portraits that were popular in most medical institutions, but instead they contained small, candid images. The albums were about 4 × 5 inches in overall size, with photos measuring about 2 × 3.5 inches. They were in stark contrast to the operative-scene photographs taken 2 or 3 years before at other major institutions. The activity of the operators and the new white painted amphitheatre illustrate the change in surgical standards. This photograph of the “All-Star Operation” appeared in the 1904 album and was accompanied by several other views of the operation, together with images of Dr. Halsted preparing for the procedure, looking at x-rays, and examining the patient. 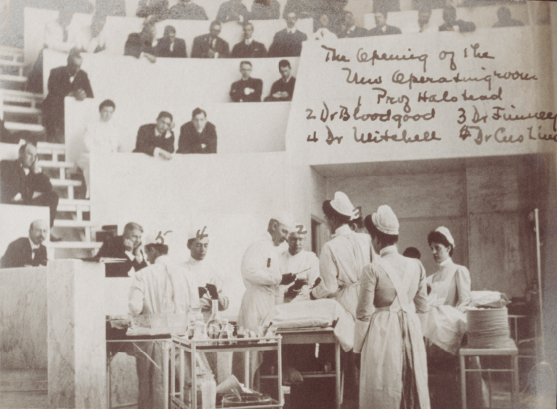 In this image, a nurse directly assists the surgeons, a new role for nurses. The role of the nurse gradually changed in this decade, and nurses became responsible for preparing the operating room, setting up instruments, and passing instruments to the surgeon. Until the 1890s, nurses, even if present at an operation, were only there to assist the patient. This operation was a resection of the femur for a patient with osteomyelitis of the upper end of the bone.

Two photographers have been identified as having worked at this time at Johns Hopkins: Thomas W. Clarke, MD, class of 1902, who also took a candid series of photographs of William Osler, MD; and A.S. Murray, the professional photographer who also photographed cases in the operating room and assisted gynecologist Howard A. Kelly, MD, in preparing Stereo-Clinic. Dr. Kelly and Mr. Murray would visit institutions around the country to photograph unusual cases. Although it is not known for certain who took the photographs or prepared the Johns Hopkins albums, it seems highly probable that Mr. Murray took this particular image. ■