Epithelial Cells on the Tail Fin of Genetically Engineered Zebrafish 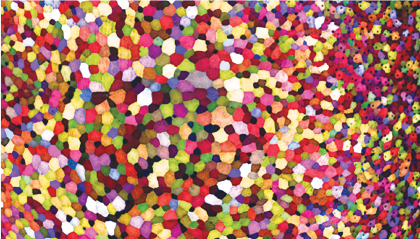 Image depicts hundreds of live cells from a tiny bit of skin on the tail fin of a genetically engineered adult zebrafish. The cells have been labeled with a new fluorescent imaging tool called Skinbow. It uniquely color codes cells by getting them to express genes encoding red, green, and blue fluorescent proteins at levels that are randomly determined. In the image at left, more than 70 detectable Skinbow colors are visible.

Skinbow is the creation of ­National Institutes of Health–supported scientists Chen-Hui Chen, PhD, and Kenneth Poss, PhD, at Duke University, Durham, with computational help from collaborators Stefano Di Talia, PhD, and Alberto Puliafito, PhD. As reported in the journal Developmental Cell,1 Skinbow’s distinctive spectrum of color occurs primarily in the outermost part of the skin in a layer of nondividing epithelial cells.

Dr. Poss and colleagues tracked these epithelial cells, individually and as a group, over their entire 2- to 3-week life­spans of the zebrafish. This gave them an unprecedented opportunity to track the cellular dynamics of wound healing or the regeneration of lost tissue over time. Skinbow only works in zebrafish for now; in theory, however, it could be adapted to mice and perhaps even humans to study skin and possibly other organs. ■