In 1995, Daniel F. Hayes, MD, FASCO, gathered with several other oncologists at a conference center in San Francisco to begin writing the first-ever ASCO guidelines on cancer treatment. He and his colleagues felt like pioneers scouting uncharted frontier. “I’ll never forget, that first hour or so, we just sat around looking at each other, [because] the field of clinical guidelines, what is now known as translational research, was so chaotic,” he said.

But the doctors got to work and imposed order onto chaos, ultimately producing the paper “Tumor Marker Utility Grading System: A Framework to Evaluate Clinical Utility of Tumor Markers.” 1 A revision of the paper 10 years later included guidelines that came to be known as the Simon-Paik-Hayes Criteria. Today, Dr. Hayes’ work is recognized as having a lasting impact on the field of tumor biomarkers.

Twenty-one years after that first guidelines meeting, Dr. Hayes begins his term as the 2016–2017 President of ASCO, and it is certain that the leadership skills, vision, research, and clinical expertise he displayed in his pioneering work on guidelines will serve him well in this role.

A distinguished track and field athlete during his high school and college years, it is fitting to say that Dr. Hayes is taking the baton of leadership at a momentous time in ASCO’s history. This coming year, ASCO will carry out major patient-recruitment efforts for the first ASCO-sponsored clinical trial—the Targeted Agent and Profiling Utilization Registry (TAPUR) study—which began enrollment in March 2016 and intends to assess commercially available, targeted anticancer drugs for patients who have tried all other treatments.

This year will also see important developments for CancerLinQ™, ASCO’s cutting-edge health information technology (HIT) platform that will aggregate data and allow oncologists to learn from each of the millions of individual patients living with cancer. On the policy front, ASCO will continue to promote its Patient-Centered Oncology Payment: Payment Reform to Support Higher Quality, More Affordable Cancer Care (PCOP) model, to address the serious financial challenges facing oncology practices.

In addition to these projects, Dr. Hayes will also focus on two initiatives close to his heart: (1) promoting ­ASCO’s efforts in value in cancer care, particularly as it relates to tumor biomarkers; and (2) continuing to lead ASCO’s ongoing collaboration with the College of American Pathologists (CAP) to develop cancer care guidelines for low- and middle-income countries.

“The next several years in oncology will be a time of change, with physician payment reform modifications, enhancement in quality improvement, and optimization of the value framework in oncology,” Dr. Vose said. “Dan is well-suited to tackle all of these issues.”

One of the most significant changes to occur at ASCO this year is the arrival of a new CEO, Clifford A. Hudis, MD, FACP, FASCO. Dr. Hudis, who worked with Dr. Hayes when both were members of the Board of Directors, spoke of the strengths Dr. Hayes will bring to the Presidency.

“I was privileged to work with Dr. Hayes when I was President and then, as always, I could count on him to quickly see through to the heart of any matter under consideration. He has an incisive analytical wisdom that enables him to lead the group to quickly grasp the core concept under discussion as well as the key implications,” Dr. Hudis said. “The process of developing complex analyses and interpretation of study results, at which he excels, is quite similar to the way our Board must incorporate multifactorial considerations as they plan our future and make challenging decisions about our next steps.”

A Long History of ASCO Service

An ASCO member since 1986, Dr. Hayes has served on numerous committees. He was a two-term member of the Breast Cancer Track of the Scientific Program Committee; Chair of the Scientific Program Committee; and Co-Chair of the ASCO-CAP Estrogen Receptor/Progesterone Receptor Expert Panel (and several other ASCO expert panels related to breast cancer) and the Journal of Clinical Oncology Editorial Board. From 2011–2014 he served on the ASCO Board of Directors. In 2007, he was presented with ASCO’s Gianni Bonadonna Breast Cancer Award and Lecture; in 2013, he was elected as a Fellow of ASCO (FASCO).

Dr. Hayes explained how he found himself, a bit unknowingly, holding his first leadership position within the Society: “In 2009, Douglas W. Blayney, MD, FASCO, then ASCO President, asked me to be Chair of the Scientific Program Committee for the Annual Meeting. I said, ‘Oh, I’m pretty busy,’ and he said, ‘Great! You start tomorrow.’ That was really a wonderful experience and led me to understand how ASCO had become, especially under the leadership of Allen S. Lichter, MD, FASCO [2006–2016 CEO], a highly professional organization with staff that are just outstanding.”

After Dr. Hayes’ term as Chair came to a close, Dr. Blayney encouraged him to run for the Board of Directors. “I was fortunate enough to be elected to the Board and had a great time serving. Frankly, when my 4-year term was up, I was sad it had ended!” he said. “I looked into running for President, and I was fortunate enough to win, and I feel very lucky for that. This last year, to prepare for the role of President, I’ve been drinking from a fire hose of information, learning about the many facets of ASCO and the multitude of incredible programs it offers.”

In addition to his involvement with ASCO, Dr. Hayes has served as Chair of the Breast Cancer Intergroup of North America’s Correlative Sciences Committee and Chair of the Southwest Oncology Group’s Breast Cancer Translational Medicine Committee. He is on the Union for International Cancer Control (UICC) TNM Expert Advisory Panel on Breast Tumors and the Early Breast Cancer Clinical Trials Collaborative Group (the Oxford Overview) Executive Committee. He is the Breast Cancer Section Editor for the online textbook UpToDate. He serves on the Susan G. Komen Scientific Advisory Board as a Komen Scholar, in addition to several other past and current leadership roles.

A Philosophy That Puts Patients First

Looking back at his career so far, Dr. Hayes says his proudest moments are when patients tell him they have enjoyed being in his care.

“Patients come to us from all walks of life and from all kinds of circumstances, and so many things have happened in their lives, struggles and challenges, and now, oh by the way, they have cancer. One of the privileges of working as an oncologist is that we get to learn so much about our patients’ lives and see them as a whole person, in addition to treating their cancer,” he said.

“We are not just a trade union, serving members, but an organization with a larger goal in mind—to improve the lives of patients with cancer,” Dr. Hayes said. “Every decision we make on the Board, every program we launch is couched in the question, ‘Is this the best thing for our patients?’ That, ultimately, is our goal.” ■ 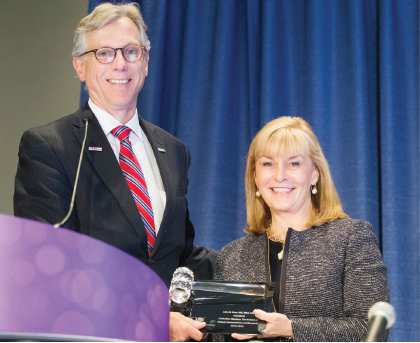 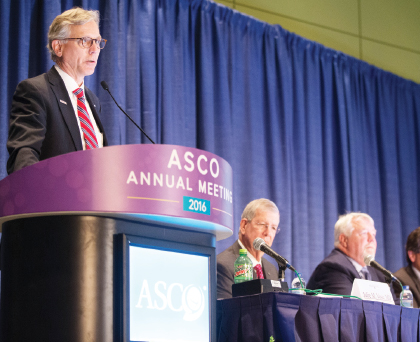