What is different about our trials vs other CAR T trials is that we believe the composition of the T cells is critically important…. Our study is the first to give an equal mix of CD4-positive and CD8-positive cells, and we hope this gets us a better therapeutic index.
— David G. Maloney, MD, PhD

“We found that not all T cells are the same. What is different about our trials vs other CAR T trials is that we believe the composition of the T cells is critically important, so we selected CD4-positive and CD8-positive T cells independently and used an equal mix. This composition has potent antitumor activity,” revealed Dr. Maloney. “Our study is the first to give an equal mix of CD4-positive and CD8-positive cells, and we hope this gets us a better therapeutic index.”

Dr. Maloney emphasized that CAR T cells are “a living drug” that requires a small amount of product to produce a robust effect. “You can give an incredibly small amount, less than 20 million total cells, which is a tiny pellet in the bottom of a test tube, and within 3 to 4 days, you have 10 times more than you started with,” he continued. “By day 8 after infusion, up to 90% of cells in the blood can be CAR T cells that are expanding and going after the tumor.”

Dr. Maloney and his team have treated 125 patients with B-cell malignancies on Protocol 2639 (41 of whom had non-Hodgkin lymphoma [NHL]). The study is examining the feasibility of manufacturing a CD19 CAR T-cell product of defined composition and is determining the safest dose. Unlike some other trials, their study does not exclude patients on the basis of absolute lymphocyte count, circulating tumor, or prior transplant, or require a test of T-cell expansion.

Phase I of the study tested three dose levels of CAR T cells manufactured from bulk CD4-positive T cells and CD8-positive cells: 2 × 105/kg, 2 × 106/kg, and 2 × 107/kg. The first 12 patients received cyclophosphamide with or without etoposide for lymphodepletion.

The investigators were surprised to detect anti-CAR immune responses in some of these patients, as evidenced by a loss of CD19 CAR T cells and B-cell recovery within 100 days of infusion.

“We found we had a robust expansion of CAR T cells in the majority of patients, but their CAR T-cell persistence was quite low and abruptly vanished before day 28. The problem was that patients were making a T-cell–mediated immune response against the CAR T-cell construct, and this was causing rejection of the CAR T cells,” Dr. Maloney said.

They hypothesized that intensification of the lymphodepletion could improve outcomes. They modified the regimen to include cyclophosphamide and fludarabine, which led to higher expansion of the CAR T cells and to greater persistence. The regimen reduces transgene immune responses and enables responses to a second CAR T-cell infusion, he revealed.

Although dose level 3 had previously been associated with no dose-limiting toxicities, the cyclophosphamide/fludarabine regimen did demonstrate more toxicity. Dose level 2 with this lymphodepletion regimen was deemed most acceptable, he added.

Dr. Maloney reported the results for the first 41 patients with NHL, of whom 73% had aggressive subtypes and 66% had received at least four prior lines of therapy. The CAR T-cell product was successfully manufactured for all the patients, and 68% of the patients were able to receive infusions as outpatients.

Of the 41 patients, 39 were evaluable; 26 (67%) responded, and 13 (33%) were complete responses. Response rates were further improved to 80% with cyclophosphamide/fludarabine lympho­depletion at dose level 2 (Table 1). 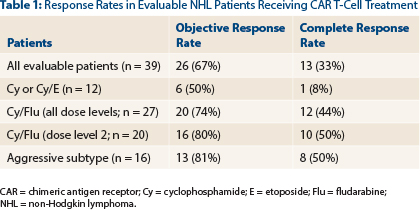 “The addition of fludarabine was associated with an increasing quality of response (P = .02),” he noted. “Responses were seen in multiple histologies.”

Factors associated with a significantly increased likelihood of achieving a response were higher levels of CD4-positive and CD8-positive EGFRt-marked cells and lymphodepletion with cyclophosphamide/fludarabine vs cyclophosphamide alone or with etoposide.

Dr. Maloney emphasized the importance of achieving a complete response. For the cyclophosphamide/fludarabine lymphodepletion group who achieved a complete response to treatment at dose level 2 (the optimal dose), median progression-free survival has not been reached, whereas it was 4.1 months in patients with less-robust responses. All these patients are alive at a median ­follow-up of 7 months, compared with approximately 70% of those who did not achieve a complete response.

The researchers also observed a relationship between the infused CAR T-cell dose and toxicity. Toxicity was predominantly cytokine-release syndrome, which occurred in 63% and was severe in four patients (13%), two of whom died at the highest dose level (2 × 107/kg) and neurotoxicity (mainly encephalopathy), which was grade 3 to 4 in 25% of the patients.

Cytokine-release syndrome and neurotoxicity both seemed to be more likely in acute lymphocytic leukemia patients compared with non-Hodgkin lymphoma patients.

Dr. Maloney and his colleagues, ­Cameron Turtle, MBBS, PhD, and Stanley R. Riddell, MD, are evaluating the levels of cytokines and other factors in patients who do and do not develop neurotoxicity and cytokine-release syndrome to determine whether a certain baseline profile might predict for these toxicities. So far, they have observed that higher levels of interleukin (IL)-6 and IL-15 and low levels of transforming growth factor (TGF)-beta on day 1 after CAR T-cell infusion are associated with ≥ grade 3 neurotoxicity.

“In the future, we may be able to give CAR T cells and do a cytokine assay to predict those patients for whom we need to consider measures to slow down the CAR T-cell growth,” he predicted.

“Our results are very encouraging for the field, but there’s still a lot to learn. We need to overcome the issue of immunogenicity to allow T cells to persist longer, and minimize toxicity,” he added. “Are we curing patients? It’s still hard to know.” ■