The Human Heart: Tales of Science and Mystery 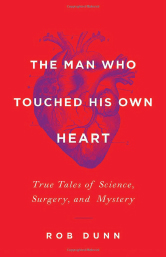 The Man Who Touched His Own Heart: True Tales of Science, Surgery, and Mystery

Each of us has a chance to have two billion heartbeats, with which to do as we please. Time will tell what we do with those billions of gifts: moments to change the world or to just sit back and admire it. —Rob Dunn

Title: The Man Who Touched His Own Heart: True Tales of Science, Surgery, and Mystery

No part of the human anatomy has been as mythologized, analogized, and poeticized as the heart. For good reason, because the human heart is, in fact, the living metronome that keeps time to our life. Fueling our body with oxygen-rich blood, the heart is the source of our strength and vitality. Our hearts are also our greatest weakness. About 610,000 Americans die each year of heart disease, making it the nation’s leading cause of death.

Why does the heart break so much more often than other parts of our bodies? The fascinating answer to that question and more is part of a multifocal story that begins hundreds of millions of years ago. And it is the subject of a fine new book by Rob Dunn called The Man Who Touched His Own Heart.

Mr. Dunn, Associate Professor of Ecology and Evolution at North Carolina State University, is the author of two other highly acclaimed books: The Wild Life of Our Bodies and Every Living Thing.

In his new book, Mr. Dunn looks at the heart as a mysteriously animated object, which is still more of a mystery than it is understood. He asks thought-provoking questions. Why do most animals get only one billion heartbeats in a lifetime, and how did modern humans get more than two billion beats? Why are heart and vascular disease epidemics for humans but not for our closest relatives, chimpanzees?

The answers to or scientific ponderings around these questions bring the reader deep inside the science and history of the heart and, for the most part, prove to be a page-turning and informative reading experience. Books developed around a single subject, such as the heart, need interesting narrative and background stories to lead the reader into the scientific meat of the book’s subject. It is a fine balancing act between too much and too little, one that Mr. Dunn negotiates with skill.

The Heart of the Matter

He opens his book in Chicago in July 1893, with a tale about a young African-American man, Daniel Hale Williams, who became one of the first African Americans to graduate with an MD degree from Northwestern University. Ambitious to serve the black community, Dr. Williams eventually opened a small hospital in a rough side of town. One night, the victim of a stab wound was wheeled in. The wound appeared superficial, and Dr. Williams stitched him up and put him in recovery. However, it turned out that the knife had punctured the heart.

In a do-or-die moment of decision, Dr. Williams performed the first-ever open-heart surgery and saved the patient. Mr. Dunn uses this medical drama to give a thorough description of the heart’s anatomy, function, and reasons why “before 1983, and Dr. Williams surgery, the heart was simply not touched.”

A Backward Glance at Cardiac Pioneers

The book is structured into 16 well-organized chapters. Some of the most interesting sections are centered on innovative medical procedures involving the heart and the doctors who pioneered them, such as Werner Forssmann. In 1929, this young doctor “imagined a whole new science and medicine of the human heart in which the heart could be studied and treated without anyone having to open the patient’s chest.”

Of course, Dr. Forssmann’s dream was cardiac catheterization, a routine process today. But at that time, the heart was still viewed as both fragile and inviolable. Dr. Forssmann’s story should serve as inspiration for any young doctor wanting to change or advance medical practice, and the author does a superb job in telling it.

In short, against the wishes of his superiors, Dr. Forssmann, who had spent hours studying the veins and hearts of cadavers, numbs his arm and does the cardiac catheterization on himself. Over time, he repeated the procedure on himself about ten times, convincing the hospital supervisors that the procedure could not only be used for diagnostics, but also for treating damaged hearts. For his role in developing this lifesaving procedure, he was awarded the Nobel Prize in Medicine.

Scientific history is enthralling because it breathes life into past challenges and the giants upon whose shoulders we now stand. It also adds perspective to where we are and what it takes to move our science ahead. But all history and no present or glimpse into the future might leave the reader wanting to know more about the heart as he or she closes the book. Although Mr. Dunn clearly likes to write about adventurous scientists and doctors of the past, he wisely devotes the last five chapters to some heady and provocative discussions about current issues and theoretical musings on the heart.

In one of his most intellectually exciting chapters, “Escaping the Laws of Nature,” Mr. Dunn introduces Geoffrey West, a physicist and mathematical thinker who began to seriously consider the general laws of the heart. Sounds simple, but it’s not.

Based on the understanding of the capillaries and a model of the fractal connections of blood vessels, of larger and smaller diameters, Mr. West can predict, in a simulated world, how the body works and how it will fail. The author writes, “Bodies fail on some sort of schedule, and West thinks he can explain when and why…. Could our human fates be predicted simply on the number of beats of our hearts, and if so, what do such predictions say about our fates?”

Arresting openings are difficult to write, but endings that leave the reader fully satisfied are even harder. Here’s Mr. Dunn’s closing: “Each of us has a chance to have two billion heartbeats, with which to do as we please. Time will tell what we do with those billions of gifts: moments to change the world or to just sit back and admire it.”

The Man Who Touched His Own Heart, an interesting and lively romp through the human heart, is strongly recommended for readers of The ASCO Post. ■