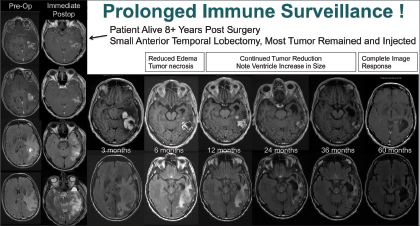 The results of the ReACT study are striking because we are observing an extremely rare overall survival advantage that is now translating into long‐term survival for a number of patients—something not seen in highly aggressive, EGFRvIII-positive glioblastoma.

Checkpoint inhibitors were major attention grabbers at the 2015 ASCO Annual Meeting, but studies suggested there are other encouraging means of harnessing the immune system in the treatment of glioblastoma.

David A. Reardon, MD, Clinical Director of the Center for Neuro-Oncology, Dana-Farber Cancer Center, Boston, presented the results of the ReACT study, which evaluated rindopepimut plus bevacizumab (Avastin) vs bevacizumab alone in patients with recurrent glioblastoma.1

Rindopepimut is an investigational vaccine that targets the tumor-specific oncogene EGFRvIII, which is a variant of the epidermal growth factor receptor (EGFR). Expression of EGFRvIII correlates with increased tumorigenicity in mouse models and poor long-term survival in clinical studies of patients with glioblastoma multiforme.

ReACT was a randomized, controlled phase II exploratory study in 73 patients treated with rindopepimut plus bevacizumab or bevacizumab plus a placebo vaccine. All patients were EGFRvIII-positive and bevacizumab-naive and were enrolled after a first or second recurrence.

The study met its primary endpoint of progression-free survival at 6 months. Given the exploratory nature and size of the trial, the study required a one-sided P value of .2 for positivity.

Similarly, objective response rates were higher with rindopepimut/bevacizumab (30% vs 18%). Response duration exceeded 6 months for five patients on rindopepimut and exceeded 1 year for three of these patients.

“The results of the ReACT study are striking because we are observing an extremely rare overall survival advantage that is now translating into long‐term survival for a number of patients—something not seen in highly aggressive, EGFRvIII‐positive glioblastoma,” Dr. Reardon offered. “Patients on the rindopepimut arm are not only surviving longer, they are experiencing a notable decrease in the need for steroids.”

Fabio M. Iwamoto, MD, of Columbia University Medical Center, New York, noted that the data so far on rindopepimut have been consistent and positive. However, he took issue with the fact that there were more patients in the rindopepimut arm (92%) than in the control arm (76%) treated after first relapse.

Other investigators reported on a heat shock protein–based vaccine in 46 newly diagnosed patients with glioblastoma.2 Patients underwent surgery and then a course of radiation therapy; those with stable disease were offered biweekly vaccination involving the use of heat shock proteins for antigen delivery (HSPPC-96 vaccine).

“If you extract heat shock proteins with their bound antigens and deliver them in naked form into the systemic circulation, there is uptake into antigen-presenting cells through the CD91 receptor, where the peptide is dissociated, cleaved, and cross-presented on major histocompatibility complex class 1 and 2 peptides for stimulation of both the CD8- and CD4-positive T-cell response,” explained Orin Bloch, MD, of Northwestern University, Chicago.

Dr. Bloch reported that median overall survival in this single-arm study was 23.8 months, and median progression-free survival was 18.0 months, which he noted was much better than in historical controls. Patients with MGMT [O(6)-methylguanine-DNA methyltransferase] methylation had a median overall survival of 44.7 months, compared with 18 months for unmethylated patients (P < .001).

Gene-mediated cytotoxic immunotherapy introduces an adeno-associated nonreplicating viral vector expressing thymidine kinase directly into the tumor. Patients then receive oral valacyclovir (Valtrex), which thymidine kinase phosphorylates to form a cytotoxic nucleotide analog that halts DNA replication and repair. As the tumor dies, tumor-associated antigens are released, and this ultimately stimulates proinflammatory cytokines, explained David S. Baskin, MD, of Houston Methodist Hospital. “We believe this stimulates an immune response, and we have laboratory data to support that,” he said.

The study was completed with 48 patients from multiple centers matched against 134 historical controls from Brigham and Women’s Hospital. In addition to the study drug, patients received radiation therapy and temozolomide.

The intervention appeared most striking in patients who underwent gross total resection of tumor (vs subtotal excision), whose median overall survival was 25.0 months, vs 16.9 months for controls, a 48% relative improvement (P = .0492). It is possible that the immunosuppressive environment is ameliorated by the removal of more tumor, as patients with incompletely resected tumors derived less benefit from gene-mediated cytotoxic immunotherapy, he noted.

“Three months later, the patient’s MRI scan looked terrible, but it turns out this was likely the initiation of the immune effect. At 6 months, he looked better, and at 5 years, we saw no abnormality,” reported Dr. Baskin. “The patient is now 8.5 years out, off all therapy, and doing well with no tumor seen on MRI scans (see Fig. 1 on page 3). This suggests the mechanism of action is immune stimulation and surveillance, as the effect of the drug is long gone.” ■

Disclosure: Dr. Reardon has received honoraria from Amgen, Merck, Midatech, Momenta Pharmaceuticals, Novartis, Roche Pharma AG, and Stemline Therapeutics; has served as a consultant or advisor to Amgen, Genentech/Roche, Merck, Midatech, Momenta Pharmaceuticals, Novartis, and Stemline Therapeutics; has been on the speakers bureau of Genentech/Roche and Merck; and has received institutional research funding from Incyte and Midatech. Dr. Iwamoto is a consultant for Novocure and Regeneron. Drs. Bloch and Baskin reported no potential conflicts of interest.