Incidence and Cancer-Related Mortality in Belize

Located on the northeast coast of Central America, Belize is a small, upper middle–income country bordered by Mexico, Guatemala, and the Caribbean Sea. Belize has a population of about 405,000 people (Table 1), of which about 15% are immigrants. Belize is considered to be one of the most politically stable and democratic political systems in Central America. Despite having a relatively small population, the country comprises ethnically diverse people. The largest ethnic groups include the Mestizo (52.9%), Creole (25.9%), and Maya (11.3%).1 In 1981, Belize was the last British colony on the American mainland to gain independence. To date, it remains the only English-speaking country in Central America.2 Though English is the official language, there are now more native Spanish speakers in Belize than English or Creole speakers. This is in large part due to migration, which continues to play a large role in the makeup of the Belizean population. Immigrant populations, mainly from Guatemala, Salvador, and Honduras, are establishing new communities in more rural areas. More than half of the overall population in Belize is rural, and the economy is dependent on agricultural exports; this pattern contrasts with vast urbanization in neighboring Central American countries.2

Although the life expectancy in Belize is increasing, the birth rate is declining, making for a growing elderly population. About half of the population is aged 25 years or older. Such demographic shifts increase the demand for social protection services for elderly populations, in addition to challenges related to poverty, social inequality, and sanitation.1 Chronic noncommunicable diseases, including cancer, are among the leading causes of death in the small Caribbean nation.

The burden of cancer in Belize includes a variety of cancer types and is predicted to rise over the next 2 decades. With 86 cases of breast cancer in 2020, this cancer type has the highest incidence rate in Belize, followed by prostate, cervical, lung, and liver cancers (Figure 1). Prostate cancer has the highest mortality, at a rate of 33 deaths in 2020, followed by lung, cervical, liver, and breast cancers (Figure 2).3

By 2040, the total cancer burden in Belize is predicted to rise over 10-fold (Figure 3).3 Though the burden of cancer by case numbers may seem small, the high incidence-to-death ratio demonstrates low survival rates and highlights the need to improve early detection and treatment services across the country (Figure 4). Partially due to a lack of screening programs and low cancer awareness, many patients present with late-stage disease.4 However, the leading causes of cancer deaths in Belize can be addressed through screening, early detection, and effective treatment.5 Lung and cervical cancers in particular are important preventable causes of morbidity and mortality that can be reduced by addressing exposure to risk factors (such as smoking) and implementing prevention programs (such as vaccines). 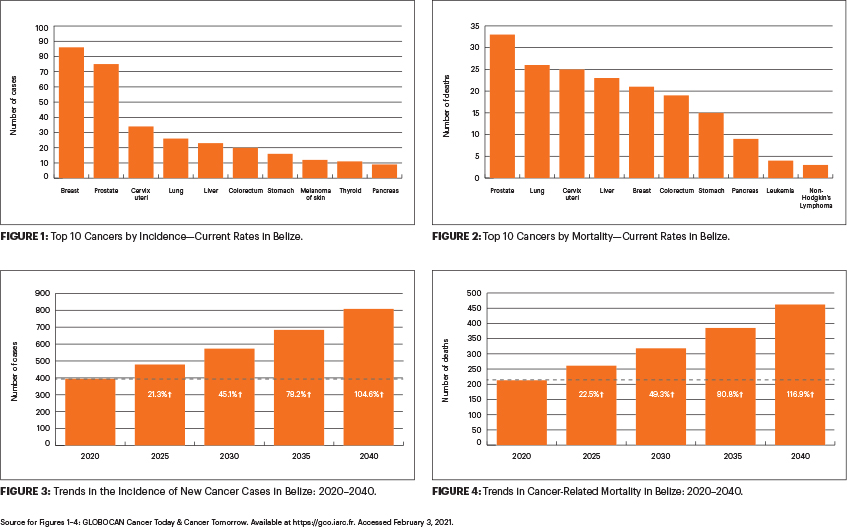 Furthermore, breast and cervical cancers disproportionately impact young women in Belize, exacerbating gender inequity in health care and disease prevention. Cervical cancer is the most frequently diagnosed cancer and also a leading cause of cancer-related deaths in women.6 Over the past decade, the cervical cancer screening program in Belize has reached the set goal of covering 80% of the population. Despite the increase in the rate of screening for cervical cancer among women aged 21 to 35 years, many women still present with advanced disease.6 Aggressive prevention strategies, particularly for high-risk populations, are needed to produce a decline in the burden of disease.

In 2016, the Ministry of Health in Belize integrated human papillomavirus vaccination into the national vaccine schedule, offering promise for increased access to prevention services. In addition, a cervical cancer prevention and control manual was developed as part of a plan of action for 2016 to 2020.6,7

The small volume of patients hinders the ability to advocate for greater investment in resources for large-scale cancer treatment and prevention services. As a result, patients with resources may leave the country for optimal care, whereas patients with fewer resources continue to receive care in a health system that may not include high-volume centers.

Though there is no national comprehensive cancer control program in Belize,8 the country’s first ever oncology medical program was established in 2018.4,8 To strengthen the oncology program and address the burden of disease in Belize, Valtis et al offered the following recommendations: strengthen local pathology and surgical oncology capabilities, establish a public chemotherapy treatment program, and refer patients to radiation oncology in nearby countries as needed.4 Despite a relatively small number of overall cancer cases, the rising burden of cancer in Belize demonstrates the need for an investment in cancer treatment and prevention services across the country.

DISCLOSURE: Ms. Craig reported no conflicts of interest. Dr. Are is a board member with Global Laparoscopy Solutions, Inc; has received research funding from Pfizer; and has a patent with the University of Nebraska Medical Center for a laparoscopy instrument.